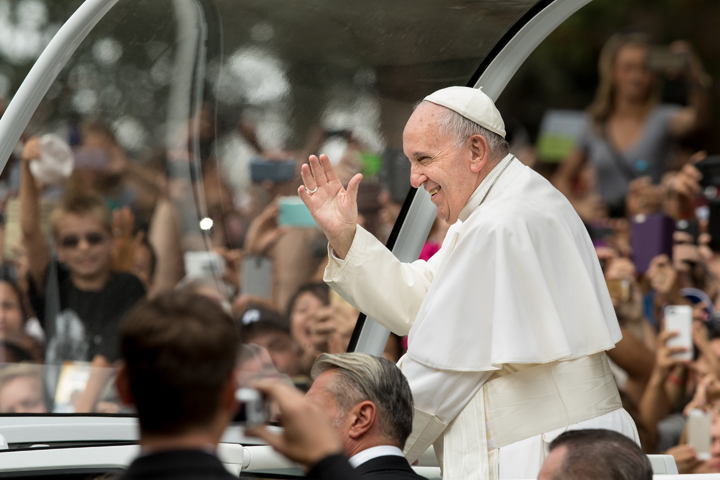 Pope Francis waves to the crowd as he arrives to celebrate the final Mass for the World Meeting of Families along Benjamin Franklin Parkway in Philadelphia Sept. 27. (CNS photo/Lisa Johnston, St. Louis Review)

Pope Francis’ first U.S. visit gave his already-high favorability ratings only a modest bounce with most Americans -- and no bounce at all among Catholics.

Yet his three-city September tour -- from Congress to the United Nations and from cathedrals to a prison -- generated significant goodwill toward the Catholic Church, according to a new survey by the Pew Research Center.

Pew’s survey, conducted just days after the pope returned to Rome, was released Wednesday and offers a snapshot of his initial impact.

The top finding: “Four times as many U.S. adults say their opinion of the Catholic Church is better now because of Pope Francis as people who say their impression has gotten worse,” said Greg Smith, associate director of research and co-author of the report.

But where there was movement: Politics made a difference for the pope, whose agenda included hot topics such as immigration, climate change, poverty and religious liberty.

“Democrats are especially likely to say Pope Francis has given them a more positive view of the church,” Smith said.

Overall, 28 percent had a more positive view of the church after Francis’ visit, while 6 percent said they now hold a more negative view. The remainder had no opinion.

“That’s 17 Democrats who have a more positive view for every 1 who says their view is now worse, compared to a ratio of nearly 3 positive to 1 negative for Republicans,” Smith said.

That doesn’t necessarily translate into a significant jump in ratings for Francis, whose overall favorable rating now stands at 68% among U.S. adults. He didn’t inspire a boost among Catholics as the shy, scholarly and strict former Pope Benedict XVI did when he visited the U.S. in 2008.
Both popes did see increased favorability overall after their visits, Smith said. But among Catholics, Benedict’s favorability rating climbed 9 points — from 52 percent before his visit to 61 after. In contrast, Francis’ favorability among Catholics has drifted downward. It was 90 percent in a February Pew survey, 86 in a June survey and now sits at 81.

“We don’t know why this is or whether the fact that Francis was already seen so favorably, there wasn’t much room to move,” Smith said.

“The overall recent improvement for Francis is concentrated among non-Catholics,” he said.

Now, 65 percent of non-Catholics hold a favorable view, up 7 percent since June -- based on the three largest groups: white evangelicals, white mainline Protestants and people with no religious identity.

Catholics who said they attended Mass at least once a week were responsible for most of the decline in Francis’ favorability rating.

“It’s not that they hold unfavorable views but they are more likely to say they have no opinion,” Smith said.

Francis’ warm embrace of Americans -- he kissed babies and hugged adults in Washington, New York and Philadelphia -- was reciprocated in the survey.

Pew gave respondents an open-ended question: “What one word best describes your impression of Pope Francis?”

Three in 4 had positive things to say: good, humble, kind and compassionate. “Amazing” turned up, as well.

The remaining terms were neutral or maybe negative -- depending on what you think of words such as “progressive” or even “socialist.”

Smith reiterated that this is a snapshot, and long-term impacts of the visit may not turn up for months -- if at all. Only half of U.S. adults (and 62 percent of Catholics) said they followed the papal visit at least fairly closely.

“People who followed the visit closely had a more favorable view of the pope and were more likely to say they have a more positive view,” Smith said.