Pope to meet Lutherans on anniversary of Reformation 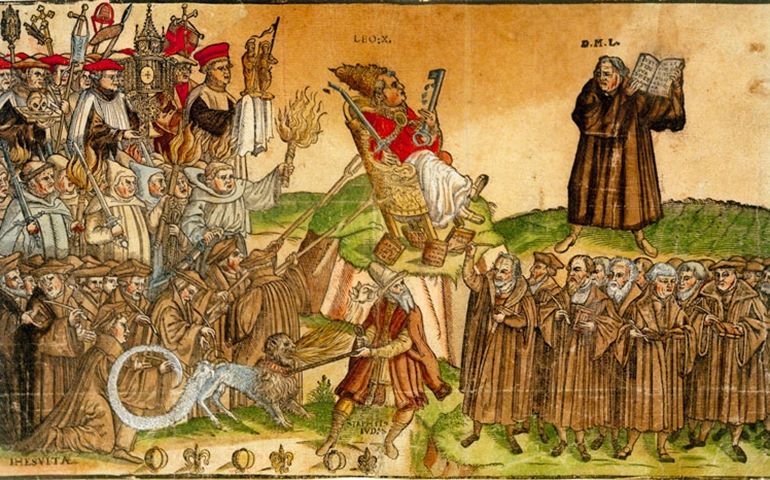 A woodcut from 1568 shows Martin Luther and other Protestants under attack by forces of Pope Leo X. (Newscom/akg-images)

Pope Francis travels to Sweden Monday on a trip that marks the start of yearlong observances for the 500th anniversary of the Reformation. He will be meeting with the Lutheran World Federation, which was founded in Lund, Sweden 70 years ago. Some 10,000 people are expected to attend a joint Catholic-Lutheran conference and prayer service under the theme From Conflict to Communion – Together in Hope.

Francis will attend a Catholic-Lutheran prayer service at the Protestant cathedral of Lund on Oct. 31, the anniversay of Martin Luther nailing his 95 Theses to the door of a German cathedral, which questioned the sale of indulgences and the Gospel foundations of papal authority and sparked the Reformation.

NCR Vatican correspondent Joshua McElwee is traveling with Pope Francis and will begin sending live reports on Monday. Find them here. Until then, here's some background and some commentary about this historic event.

Francis interview: Excerpts on ecumenism, terrorism and gossip
by David Gibson, Religion News Service
The pope's plans: In a wide-ranging interview published on the eve of his visit to Sweden to mark the anniversary of the Reformation, the pontiff is as quotable as ever.

'In ecumenical unity, you keep your identities.'
By Dan Stockman, Global Sisters Report
Q&A: Susan K. Wood, a theologian and Sister of Charity of Leavenworth, is co-author of A Shared Spiritual Journey: Lutherans and Catholics Traveling Toward Unity, published Aug. 1. As a member of the Lutheran-Catholic Commission on Unity, she will be in Sweden for the conference "From Conflict to Communion – Together in Hope."

Lutherans and Catholics chart path to unity
by Thomas Ryan
Viewpoint: Catholics and Lutherans have made more progress in the last 50 years toward healing the wounds of our divisions than we have in the last five centuries.

Travel Luther's life through these German destinations
By Patricia Lefevere
Special feature: Martin Luther's light has yet to go out in Germany. This reporter followed Luther's footsteps, journeying through spots where he trod during his life.

Read all the stories about the anniversary and Pope Francis' trip to Sweden here: The Reformation turns 500

Vatican | Pope to meet Lutherans on anniversary of Reformation