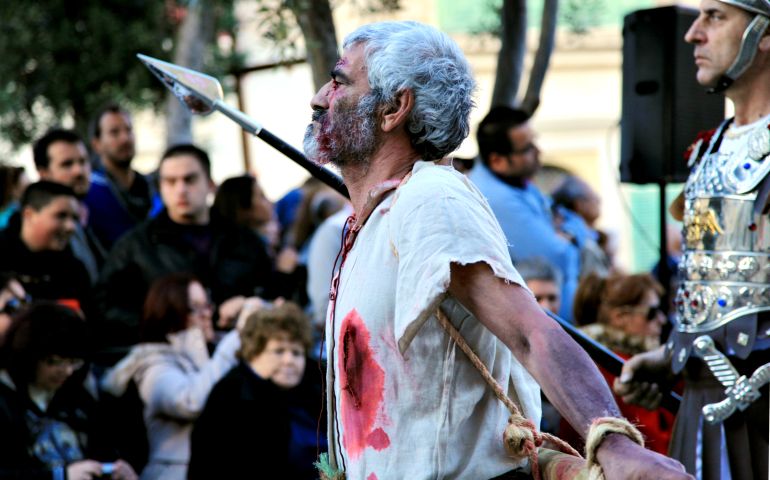 Barabbas is portrayed in a Good Friday procession in Zebbug, Malta, on April 18, 2014. (Wikimedia Commons/Frank Vincentz)

When I got the job, some years ago, as director of a re-entry program for men and women being released from prison, a friend called to say, "I will pray to St. Barabbas for your success."

St. Barabbas? I laughed. She meant St. Dismas, the thief on Jesus' right hand. As generous as the calendar of saints has been, I've never seen Barabbas on it (nor Dismas for that matter). I laughed and forgot about it.

But then, as I interviewed inmates getting ready for their release from prison, as I grew to understand the enormity of their needs, I began to imagine Barabbas.

Jerusalem has several levels. Tourists shop underground, amid crowded, colorful stalls. It's cooler that the street and well-lit. Barabbas would have been chained to a stone wall on a deeper level, in a dank cell, pitch-black but for torches the guards carried.

So there's Barabbas, standing alone in bright sunlight. Did he have family? Revolutionary friends? Anyone not afraid of harboring him?

Today's released prisoners aren't much different from Barabbas. The world has changed while they were locked up and the people they know have moved on. Maybe someone took pity on Barabbas and helped him get out of town. Or perhaps he was soon rearrested. Local soldiers who had picked him up originally would be keeping a lookout for him.

I like to think he took advantage of this wondrous gift of release to do good, to be good. He received a great grace by way of the condemnation of Jesus. Surely, he reaped the benefit.

There are many things to pray for these days, but don't forget to pray for prisoners and for those released from prison. Go ahead. Pray to St. Barabbas — and St. Dismas.

Good Friday: Look and see if there be any sorrow like unto my sorrow!