'The Rise of the Guardians' an inspiring fantasy mash-up 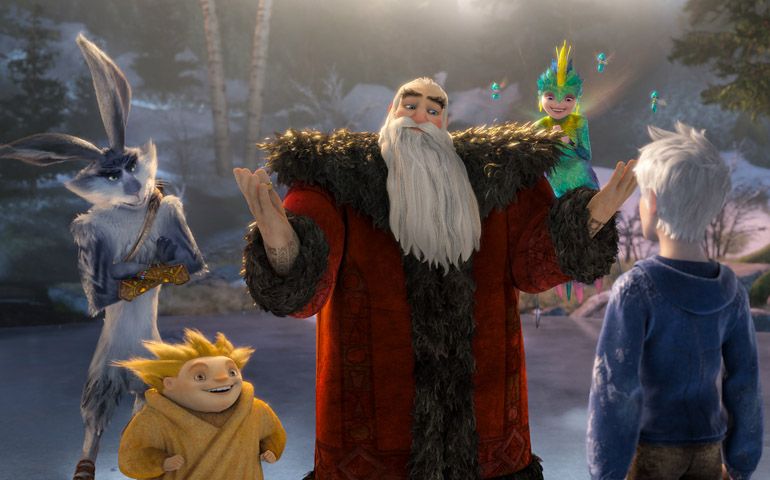 Although it took me some time to figure out what was going on and what Dreamworks' handsome, over-long film was trying to say, it became apparent about halfway through that I could easily make connections between the imaginative narrative and Christian beliefs. Seeing "Guardians" bears out the saying "You get out of a film what you bring to it" because you make meaning according to your own lens.

The story opens with Jack Frost (the voice of Chris Pine) telling us how he came to be the spirit of winter, but that he doesn't know why; he doesn't have memories about what came before. He does know he makes children happy when he creates snow days for them.

The narrative picks up three days before Easter at the North Pole, and Santa Claus (Alec Baldwin with a suspicious Russian accent), or "North," as his friends call him, is upset because Pitch Black, otherwise known as the Boogeyman (Jude Law), is threatening the children of the world with fear-inducing "night mares" (literally, dark horses). North calls the Guardians of Childhood: the Tooth Fairy (Isla Fisher), the Easter Bunny (Hugh Jackman) and the voiceless Sandman. North learns from the also-voiceless Man in the Moon that he is to add a new Guardian to the group: Jack Frost. However, Jack is sad because children don't believe in him, and he decides not to join the Guardians, though later decides to help the group because of Pitch's threat.

Pitch Black is angry that children don't like or believe in him. He is fast at work because he wants to turn off the lights of children's hope and imagination. His minions raid the tooth fairies' lair and collect the containers that hold the teeth and memories of all the children, then imprison the fairies. The Guardians shift into gear and take over teeth collection themselves. They promise Jack to find his baby teeth and memories, too.

Discouraged after a thwarted Easter egg hunt, Jack goes to Antarctica, where Pitch tries to tempt Jack to give up hope. Jack refuses, and Pitch threatens to smother a baby tooth fairy unless Jack gives up his trusty staff. Jack does, and he and the fairy try to stay warm in an ice crevasse. The little one discovers Jack's tooth and memory container. Jack learns he became the winter spirit because of a great act of heroism. With his power restored, he joins the Guardians to defeat Pitch and his message of fear.

"The Rise of the Guardians" is an adaptation of William Joyce's "The Guardians of Childhood." This is not a religious film, though it is framed by Christmas and Easter. Although its references are those fairy-type stories adults tell children to explain parts of life that may be too mature for them (or to get kids to be good), the film mirrors the Christian story and spirituality. I found at least three reasons for catechists and people of faith to like and appreciate "The Rise of the Guardians."

First, the film makes clear that Easter is a greater feast than Christmas and opens the way for the thoughtful parent and catechist to explain why. Christmas gets so much more attention in our popular consumer culture that it's refreshing to find a solid element of truth in a narrative product.

Another reason to like the film is Jack's story, for it is one of heroic self-sacrifice and the greatest act of love one can do for another, to give one's life. It's interesting that the time covered in the film lines up with that of the Easter triduum. Jack's story is one of suffering, death, resurrection and above all, hope joined with faith and love.

The film was released in time for Christmas, but it is really an Easter story.

The vocation of the Guardians is similar to Guardian Angels, to keep watch over the children of the world because children are "all that we were, all that we are and all that we will ever be."

The Man in the Moon seems to symbolize God and divine providence over life and creation. "Stop believing in fear" is the overall message; "it only takes one 'light' (a child who believes) to bear witness to life." How many times did Jesus tell the disciples in the Gospels not to fear?

Yet for all its good points and themes, the film is a mash-up of fantasy characters, storylines, some corny humor (the "Easter kangaroo"), beautiful animation (the tooth fairies), symbols and ideas. But as the final scenes play out, tying everything into a neat bow, I thought that children would enjoy the film, especially those who are ill or who face suffering or challenges (such as bullying) in any way. There is darkness, but the Guardians show ways to overcome fear with hope, joy and love. The film acknowledges the courage of children and teaches the audience to see the signs and symbols of life more deeply and to listen to good inspiration.

As long and as narratively ambitious "The Rise of the Guardians" is, I found the end of the film moving because it creates an imaginary space for children to figure out life in hope and joy.

Culture | 'The Rise of the Guardians' an inspiring fantasy mash-up

Some sing and some witness