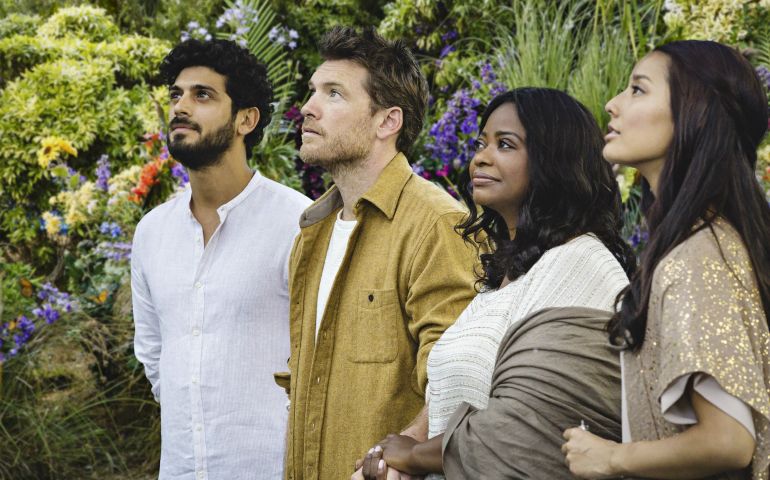 "The Shack," based on the 2007 best-selling novel by William P. Young, is now a major motion picture starring Sam Worthington and Oscar-winning actress Octavia Spencer. In wide release today, the film, in my humble opinion, far surpasses the novel.

As anyone who reads my reviews knows, I am not a fan of the "Christian" genre, because most of those movies lead with a message rather than the story. I prefer to figure out what the movie means rather than sit in a theater as if it were a Sunday school classroom or a church with a preacher teaching me. I prefer to have the filmmaker trust me, the audience, to figure it out.

It's fine to make Christian films, but films about people who happen to be Christian are much more interesting. Here, producer Gil Netter and director Stuart Hazeldine get it right. The team of writers unclutters the wordy and sometimes confusing dialogue of the novel, leaving us to ponder and marvel at what is going on between Mack, Worthington's character, and the deity.

But here's the deal about "The Shack." It is completely unique in the realm of films about Christians, Christian theology and spirituality. It deals with a grieving, guilt-ridden man's grief over the loss of a child by introducing him to the persons of the Trinity (Spencer and Graham Greene as the feminine and masculine expressions of God the Father, Sumire Matsubara as the Holy Spirit, and Avraham Aviv Alush as Jesus the Son) over a weekend in the woods.

Sometime after the kidnapping and murder of his youngest daughter, Missy (Amelie Eve), Mack returns to the shack in the woods where her bloodstained little dress was found. He is determined to find the murderer and even brings a gun with which to kill him.

There, he encounters a young man in the woods who disarms him and invites him to walk with him. All of a sudden, they pass from winter's frozen forest to a lovely country home. Mack is greeted by a woman, "Papa" (Spencer), and soon meets Sarayu (Matsubara). It becomes evident to Mack that he is in the presence of the Holy Trinity.

But Mack is angry and confused. His plans of revenge have been thwarted. The perennial question of why God permits evil is addressed throughout the weekend and the conversations invite Mack to think about his identity as a man, his relationship with God, his family and his neighbor.

The vibrant, almost surreal atmosphere and the saturated color scheme of the dwelling place of heaven in "The Shack" reminded me of director Vincent Ward's 1998 fantasy drama of the afterlife, "What Dreams May Come." At some point, it might be interesting to compare and contrast the two films, but "The Shack" is a completely different cinematic experience because God, as the Trinity, plays gentle, loving and patient counterpoint to Mack's anger and anguish, offering great solace to a grieving father.

My colleague Sr. Nancy Usselmann described "The Shack" as a cinematic retreat. To me, it is cinematic poetry.

"The Shack" is an honest consideration of a Christian theological explanation for why bad things happen to good people. If you loved the book, I think you will be able to say the film surpasses it. If you had a hard time reading the book, as I did, but you are open to an experience of the Christian imagination informed by Trinitarian theology, well, take a chance that you may be inspired.

If you know grief and loss, the film offers comfort. If you are angry at God for any reason, test it out at the movie theater. Take a risk during Lent that you may find God in the cinematic art, and in the dark, at the multiplex.

[Sr. Rose Pacatte, a member of the Daughters of St. Paul, is the Director of the Pauline Center for Media Studies in Los Angeles.]

Culture | 'The Shack': finding God in the dark