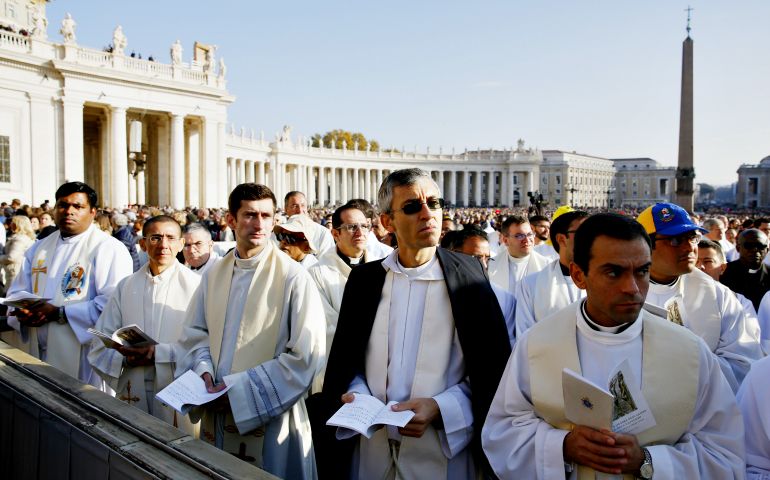 Priests watch a video monitor in St. Peter's Square as Pope Francis closes the Holy Door of St. Peter's Basilica prior to the closing Mass of the Year of Mercy at the Vatican Nov. 20, 2016. (CNS/Paul Haring)

It seems that married priests are on the horizon in the Catholic church. Word is that an experiment will soon take place in Brazil to address the severe shortage of priests in that country.

We know, of course, that married priests are already active even in the United States. Episcopal clergymen and even some Lutheran clergyman who have entered the church have been allowed to serve as clerics and remain married. As is to be expected, things will go slowly. Pope Francis could simply make an announcement that henceforth priests can get married within the church and that would be that. Of course, that is not the way we do things in our church.

South America, perhaps followed by Africa, are continents where the need for additional priests to serve the people has considerable urgency. Therefore, they may be good places to experiment with a married clergy. Perhaps married deacons may be ordained to priesthood, or priests who have left the priesthood and married might be reinstated. Naturally, only small steps can be taken. One doesn't want to push the envelope too dramatically.

When I first read Jamie's article, it gave me pause. Her points are well-taken.

A blog post by "Rebel Girl" responds to Manson's article and provides a well-thought-out analysis that I believe is worthwhile reading.

It is undoubtedly true that there is no interest in ordaining female priests in either South America or Africa. I would add that Francis has made it clear that there will be no women priests at least for the duration of his papacy. It just isn't going to happen anytime soon.

The need to weaken the mandatory celibacy rule in the Roman church is also critical. We have put our heads in the sand with the sexual abuse crisis, but things have to change. Those wedded to the charism of celibacy can pursue it in religious orders or otherwise, but the mandate needs to be ended.

Moving forward on married priests does not mean that the quest for female priests should not continue to be pursued vociferously. The Rebel Girl post makes this clear. Yet, the thrust for women right now would be most effective by pursuing greater leadership roles and pushing for female deacons. Voices need to be raised with bishops to demand action in these areas.

Those women who have taken the plunge and gotten themselves ordained are pioneers and show the way we are headed eventually. We owe them a debt of gratitude for their witness. Someday, they will be remembered for their courage and forward thinking.

Within the church, however, we need to see movement and progress. Since Francis has made it clear that he will not ordain women, it becomes even more important that he make positive changes in the way women are treated in the church. Women need to be included in the highest councils of the church. It is time they exercised real leadership roles. A ministerial role as deacons, clearly attested in the New Testament, should move forward.

Finally, let me mention one of my pet peeves. We often correctly defer to the cultures in other lands. We understand that Africa or Asia may have a different view of women, for example. We try to understand their culture and make some allowances for it.

My question is, why do we never make allowances for Western culture? Why do our values, including equal rights for women, need to be ignored to placate other cultures? Why can't we be responsive to indigenous cultures, including our own?

If we need to explore experiments with married priests in South America and Africa, how about something for the West as well?

How about an experiment with female deacons in Boston or Washington, D.C.?

Vatican | Should we forgo married priests until we can have women priests?