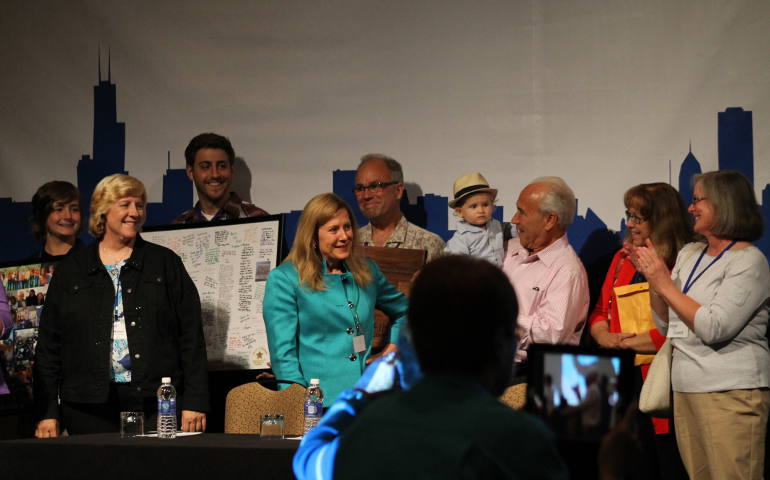 The 25th anniversary conference for the Survivors Network of those Abused by Priests opened here as you would expect for any organization reaching a milestone. Leading members highlighted moments for retrospection and bestowed accolades on all that helped the abuse advocates’ organization arrive at this night.

“You have all chosen to put yourself out there … you take risks,” said David Clohessy, the group’s executive director at the opening session Friday night.

He said what SNAP does – protect the vulnerable -- is “not rocket science … more precious and rare than genius, it takes courage, it takes passion, it takes commitment.”

The conference brought together 350-plus people for a three-day conference that will see SNAP leaders like Clohessy, its president and founder Barbara Blaine and Peter Isely, but also Fr. Tom Doyle, attorney Jeffrey Anderson, Illinois Supreme Court Justice Anne Burke (an original member of the U.S. bishops’ National Review Board), and Jennifer Haselberger.

Those outside of SNAP who spoke Friday night also offered praise for its efforts of the past quarter century, but more than that posed a question: how will those efforts look in the years ahead?

Pointing to an increasing awareness of the abuse issue in other parts of the globe, in part because of SNAP’s efforts, journalist Jason Berry said as “this critical mass will keep building,” it’s important for the group to think about its long-term plan.

Berry, who focused his time recounting his extensive reporting on the church’s abuse scandals, much of it featured in NCR, turned the spotlight to Rome and the language of Pope Francis. He called him “an existential figure,” quoting the pontiff last month when he said “I beg your forgiveness, too, for the sins of omission on the part of Church leaders who did not respond adequately to reports of abuse made by family members, as well as by abuse victims themselves.”

“He is saying things no pope has ever said,” Berry said. “The language he is putting forth is creating an arena where the moral idea of justice can finally be debated.”

The question, he said, is “Can a standard of justice be erected following the rhetoric that he’s putting forth?”

He suggested SNAP look at the power it has accumulated and strategically “decide how to frame a response to what is going on” in Rome from the pope. Because of the Francis’ immense popularity “and public opinion is so squarely behind him,” Berry said, in a sense it’s SNAP’s responsibility “to keep pushing information and keep using language that will advance and rise, so that [Francis] will respond in kind.”

Similarly, Vincent Warren, director of the Center for Constitutional Rights that assisted SNAP in bringing a case against the Vatican at the International Criminal Court to the United Nations, asked similar questions.

He noted that SNAP has built “from a tiny ember to an enormous fire,” with the challenge now being not just how to fan the flames but to use it strategically in moving ahead.

“I would urge you to think not so much what are we fighting, but what are we building? What are our opportunities now? What does success look like for us? Where does SNAP want to be in this discussion?” Warren said.

The earlier portion of the night saw the annual gathering become more personal, with the families of two of SNAP’s most prominent leaders made appearances, one expected and one a surprise. Family and friends of Barbara Blaine appeared on stage, holding gifts and mementos recognizing her work of the past quarter century.

Early on in his speech to close the evening, Isely, the SNAP Midwest leader, summarized the night’s tone -- exclaiming “Happy birthday SNAP!” – but he, too raised the question of the group’s future.

He likened the current moment in the abuse scandal to punctuation, one that some in the church have tried to conclude with a period, but one he suggested more warranted a comma, or perhaps better, a pause.

“We’re at a pause right now. Let’s make good use this weekend of our pause together. Let’s make it a renewing pause, a revitalizing pause, so that we can write the next half of the next SNAP sentence,” Isely said.