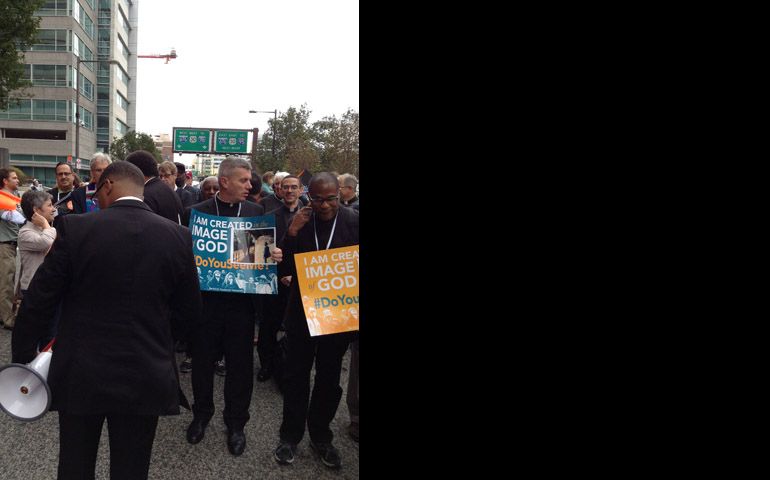 In the course of the pope's whirlwind tour of three gritty American cities, Dwayne Royster has heard much to encourage him.

Executive Director of Philadelphians Organized to Witness Empower & Rebuild (POWER), and founding pastor of the city's Living Waters United Church of Christ (UCC), Royster was attending a meeting of more than 300 PICO activists gathered in Philadelphia to participate in events around the Pope's visit.

Royster, who had been part of a PICO group to visit the Vatican and meet with church officials, was hopeful that he and his companions would influence the Pope's American message. "We tried to encourage the pope by saying to his advisors if you come here, and address immigration, we agree with you. But we're really interested in hearing you tie it to racial justice, the original sin of the Americas," he said.

On Friday, Royster led a group of clergy and PICO participants down city streets in a march that rocked the streets of the cities' Chinatown section, on a journey from the Center City Hotel where they were meeting to Independence Hall, where the pope was to speak the next day. The march and candlelight vigil were part of the organization's "40 Days of Faithful Action," an initiative responding to and drawing energy from the pope's American visit.

The PICO meeting, which took place over the course of the weekend, also included an opportunity for PICO participants to agree on a multi-point covenant which lays out the "spiritual" principles behind the organization's many social justice commitments. "We're putting together what we call the 21st century covenant calling faith communities to take control of social justice," says United Methodist pastor Gregory Holston.

On Saturday, Sept. 26, attendees heard from Eminence Cardinal Peter Turkson, President of the Pontifical Council for Justice and Peace, Traci Blackmon, a member of the Ferguson, Mo., Commission, and other faith leaders active in the Black Lives Matter movement.

"I believe Pope Francis is really attracting a different kind of Catholic spirit in people," says Catalina Morales, a Minnesota-based organizer with the ISAIAH group who traveled roughly 24 hours on a bus with her companions to attend the conference weekend. "We talked about what we would say to Pope Francis. A lot of people said they would thank him for being humble and say he inspires them to actually do something in churches."

"We are appreciative of what the pope has said, but we would have liked for him to have dug deeper in the uniqueness of racism in America, which has not just been destructive to families of color, but destructive to the whole nation," says Royster. "He talked about us being a family. Members of the family are hurting deeply and they need to hear the sin of racism called out not only in greater society but all in the church."

"I hope that after having the opportunity to experience America, or three of its largest cities, and having had the chance to listen to stories and experience and encounter people, he will go back and mull the American situation and how best the church can address it," he concluded.

As was the case with other participants, many of Morales' travel companions were undocumented immigrants who raised their own money, approximately $850 dollars for travel, hotel and other expenses.

"Do you see me?" read the placards carried by many vigil participants as they marched Friday night. When they return home, said Morales, those attending want to make sure that bishops, lay leaders and clergy pay attention to undocumented residents, and understand the pain of separation many of them experience.

Morales said one mother will return home with a message of hope for her son, incarcerated in a detention center -- that Francis indeed does notice him and many others on the margins. "I believe that message will keep him strong and help him to have faith," Morales said.

Did participants hear what they hoped to hear from Francis?

After hearing the pope's speech at Independence Hall, with its explicit shoutout to the Hispanic community in America, Nanci Palacios says she's never felt more grounded and affirmed in the work that she does as a member of Faith in Florida, a community-organizing group in Tampa, Fla.

"The fact that he introduced himself as a son of immigrants in a country built upon immigrants gives my leaders a sense of hope," she said -- let alone the fact that the pope has given many of his addresses in Spanish.  Every day she said, she felt that his message was growing more layered and profound.

"I felt like he was really seeing my immigrant brothers and sisters," she said. "He's challenging us to be agents of change in our country."

[Elizabeth Eisenstadt Evans is a religion columnist for Lancaster Newspapers Inc., and writes for NCR and GlobalSisterReport.org.]

Pope calls for guaranteed health care for all people

Activist nun: Change in the church comes from the bottom up