Skip to main content
News
This story appears in the Letters from Japan feature series. View the full series. 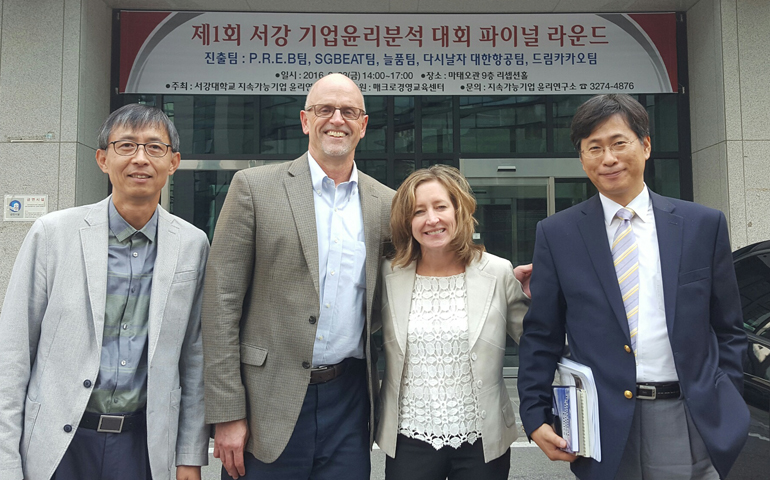 Editor's note: For the fall 2016 semester, David DeCosse is invited visiting professor at Sophia University, the Jesuit University in Tokyo. He is on the staff of the Markkula Center for Applied Ethics at Santa Clara University. He will be blogging about his experience abroad via the blog "Letters from Japan."

The great Asian theologian Aloysius Pieris said that inculturation and liberation are two names for the same idea: that the integration of the Gospel with Asian cultures -- and especially with the cultures of the Asian poor -- is the work of divine redemption. At a major business ethics conference at the Jesuit Sogang University in Seoul on Sept. 22 and 23, the integration of faith and culture in a country with the 11th largest economy in the world (and a disproportionately high global ranking for corruption) was put to the test.

The immediate occasion for the challenge was the focus of the Third Annual Sogang-Deloitte International Business Ethics Forum: The book Blind Spots: Why We Fail to Do What's Right and What to Do About It, co-authored by Notre Dame business ethics professor Ann Tenbrunsel (who was at the conference) and Harvard Business School's Max Bazerman. But the vexing issue hanging over the conference was the South Korean anti-corruption law that went into effect on Sept. 28.

Sogang Professor Young Kyun Chang said the measure aimed at a "totally new world" of business practices in the country. The law takes special aim at the blurry line between what Korean cultural traditions call a gift and what in effect is a bribe. Among other stipulations, the measure prohibits purchase of a meal more than 30,000 Korean won ($27) for a public official, state-run company employee, journalist or teacher (in any situation with a potential conflict of interest).

The law also comes at a time of growing frustration in Korean society with greed-inspired shortcuts. In the aftermath of the 2014 Sewol ferry sinking that took the lives of hundreds of teenaged students, Bishop Lazzaro You Heung-Sik decried a spirit of materialism that bred the corruption and neglect at the root of the disaster.

Tenbrunsel's work emerges from the field of behavioral economics, which turns to psychology to provide a more complex picture of economic actors than the standard reductionist portrait of the profit maximizer. She argues that we will not get consistently ethical business practices if we focus only on isolated bad apples or on revised codes of conduct or, for that matter, on new anti-corruption laws. Instead we need to pay attention to the prevalence of "blind spots" -- the habitual practices and cultural tendencies by which we deceive ourselves about what's ethical or are inclined toward doing wrong in ways about which we may not be fully conscious but that still cause great harm.

Tenbrunsel's powerful work matched the moment in South Korea and was very well received at the conference. On one hand, her work offered a way to analyze blind spots in Korean cultural traditions around gift-giving related to business. On the other hand, her work also can be put in fruitful dialogue with key assumptions of Catholic theological ethics like the enduring place of self-deception in human sinfulness; the ways in which corruption undermines contractual justice founded on equal human dignity; and the ways in which corruption is rarely a purely private matter but inevitably tarnishes the common good.

To be sure, South Korea is hardly alone in struggling with blind spots in its business ethics practices. Such self-deception is spread liberally around the world. But the challenge to South Korea has a particular flavor. Concerns about corruption occur against a backdrop of profound changes in the South Korean economy (not to mention the existential threat to the country lying just across the Demilitarized Zone). After years of economic growth fueled largely by exports, the country has fallen victim to globalization's borderless logic and begun shipping factory jobs to lower-cost production facilities in China.

Moreover, economic inequality is on the rise, with the World Bank ranking South Korea as having the most unequal income distribution of any Asian economy. Numerous ideas have been considered to address such changes -- from a more progressive income tax to a reduction in gender disparity in wages. The anti-corruption law could be a powerful response to these changes as well. "The law tries to make Korea a more equal society, a more transparent society, and a more economically competitive society," said Professor Young-Seok Park, also on the Sogang faculty and the organizer of the conference.

Tenbrunsel is in a pitched battle to stop a reductionist logic from taking over business practices and business ethics. I think her battle is consistent with Pope Francis' criticism of "unfettered capitalism." Surely, business and markets have profound moral purposes. And the precise definition of such purposes emerges from many places and practices. But, for Catholicism, there are few better ways of contributing to such a process of definition than occasions like the Sogang University conference.

The South Korean anti-corruption law is now on the books. Livestock farmers, fishermen, and restaurant owners -- many who operate on small margins and provide the content or place for gift-giving -- have already complained about the law cutting into business. But a 2014 survey found that nearly 80 percent of Koreans thought that senior government officials were corrupt. Between these competing concerns, the hard work of cultural transformation lies ahead -- one Jesuit university business ethics conference; one conversation between culture and faith; and one blind spot removed at a time.

[David DeCosse serves the staff of the Markkula Center for Applied Ethics at Santa Clara University.]