Take and Read: Being as Communion 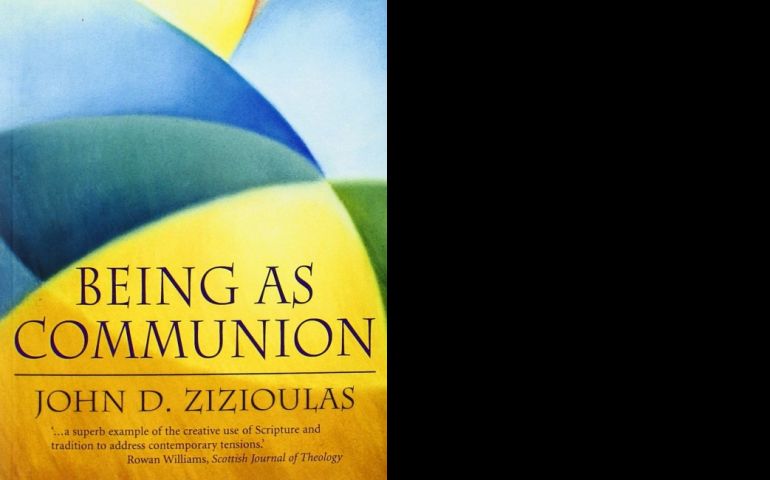 Contemporary edition of Jean Zizioulas' "Being as Communion: Studies in Personhood and the Church," first published in English in 1985.
This article appears in the Take and Read feature series. View the full series.

Being as Communion: Studies in Personhood and the Church
by Jean Zizioulas
(St. Vladimir's Press, 1985)

In 1982 I began my studies in theological ethics at the Pontifical Gregorian University in Rome. From 1982 to 1984, I took roughly 16 courses, did comprehensive exams, and wrote a licentiate thesis with Klaus Demmer on moral metaphysics. From 1985 to 1987, I wrote my dissertation on Thomas Aquinas under Josef Fuchs.

I had an exciting roster of courses those first two years: three courses with Fuchs, four with Demmer, three with Louis Vereecke, two with Edouard Hamel, and one each with Wilhelm Ernst, Frank Sullivan, and Jared Wicks. For a budding moral theologian, wanting to learn the "tradition" and the contemporary European approach to theological ethics, I was in heaven.

In the spring of 1984, colleagues told me I should sit in Jean Zizioulas' class. I had never had a course solely dedicated to Orthodox theology. I enrolled in a class of about 200 students, most of whom were priests.

I remember thinking that listening to Zizioulas was like listening to a Martian! I had spent two years on casuistry, fundamental and final options, deontology and teleology. With Fuchs and Demmer, I was at the heart of the European debate about the autonomous conscience and the magisterium. This was not at all the banal debate that happened in the United States, about whether we could follow our conscience instead of a church teaching. For European moralists, and particularly the Germans, the autonomous conscience arose from the ashes of war-torn Europe, indicting itself for the ravages of fascism, Nazism and the holocaust. Conscience was not an option; it was a haunting, divine reproach of vicious subservience built on fear.

There in Rome, I was reading everything by Demmer and Fuchs and their colleagues, as well as overseeing the English editions of Fuchs' writings for Georgetown University Press. I also was having class with Vereecke from whom I learned about the probabilists, the probabiliorists, the equiprobabilists, to say nothing of the laxists and tutiorists. In the world of theological ethics I knew my tradition, from the heights of German and American debates over metaethics down to the minute particularity of the casuistry of an ectopic pregnancy.

Sitting that spring listening to Zizioulas was like hearing a whole new language, an entirely new perspective, and an absolutely unexpected breath of fresh air. Fresh air, that's what it was. Zizioulas was lecturing on the Holy Spirit and relationality. In my other 15 courses, with the exception of Hamel, the Holy Spirit was rarely mentioned.

At the Greg, little reading was required for one's course work. Readings were always referenced -- and one could do the readings -- but accountability for a course was based on whether one understood the lectures. Zizioulas' readings were mostly in French. He juxtaposed his early essays with subsequent debates with two Roman Catholic theologians who engaged him, Jesuit Fr. Ignace de la Potterie and Dominican Friar Yves Congar.

At the heart of his lectures was his book, L'Être ecclésial (Paris: Labor et Fides, 1981) that appeared later in 1985 in English as Being as Communion: Studies in Personhood and the Church (Yonkers: St. Vladmir's Press). I was mesmerized by the relationality that seeped throughout these pages.

In L'Être ecclesial, Zizioulas argues that the Fall shows us what our nature is when we creatures we are left to ourselves. The Fall was, above all things, a break with communion. Alienated humanity after the Fall is left looking for personhood, which denotes at once particularity and communion. The person we are looking for is Christ who is fully relational: to the Father and the Spirit in the Godhead and to us in our humanity. In his person, Christ is constitutively relational.

Inasmuch as by baptism we discover that our personal freedom is in Christ, our freedom is no longer the alienating practice of choosing between two, opting for one and declining the other. Freedom is found not in individuating practices but in relational ones.

We must therefore see that the church as communion is never an either/or. It is not local or universal, but at once; the church is both. For believers it is impossible to understand that the local church is not at once the universal church. The church united in Christ is the integrity, the plentitude of the body of Christ. The universal church is as present in the local church as the body of Christ is present in the Sunday Eucharist in one's parish.

Most early councils wrestled to understand that the one local church could not refuse a faithful member of another community: Each community was in full unity, not imposed from beyond but realized within as it broke the bread. For this reason bishops were not ordained outside the context of Eucharistic communion. Within the Eucharist we ordain the one called to responsibility for the communion of the church.

The Spirit not only constitutes us as persons but also introduces the eschaton into history and changes linear history into the present; history is not simply identified as the past, but as the present and the future as well. For the Greek Orthodox, the anamnesis of the Eucharist includes a remembrance of all three: "Remembering, therefore, this command of the Savior ("to do this in memory of me") and all that came to pass for our sake, the cross, the tomb, the resurrection on the third day, the ascension into heaven, the enthronement at the right hand of the Father, and the second, glorious coming."

What Christ gives us in the Eucharist is the structure of the kingdom itself: in the Eucharist we can understand that in the local church we can find the universal church and similarly in the present we can witness to salvation history. In communion all that alienates us disappears.

The relationality that Christ brings us in the Eucharist is his oneness with the Father and the Spirit and with us. In turn, in the local church, the bishop ordained in the Eucharist must see that the bishop's very identity is not as an individual but as relational person whose function is fundamentally to promote communion.

All this gives you, I hope, an appreciation for Zizioulas' gift.

At the end of every course at the Gregorian, we would have a final exam, a 10-minute oral test for each student with the professor. Oral exams at the Gregorian were, well, in a word, weird. You just got on a long alphabetical line: you had to make sure that you were the person the professor expected when he looked up from his roster as you entered the exam. The professor would ask any number of questions based on his lectures. It was all very predictable.

For my oral exams I decided that I wanted a conversation with each of my professors. For each exam, I presented the professor with a list of readings that I had done for the course. This always worked, and better, no one else did it! The professor invariably would want, in the midst of the monotony of the endless hours of asking the same question, a conversation too!

For Zizioulas, I read everything: the early essays, the debates with Congar, L'Être ecclésial. I gave him the list. He asked me a few questions to see if I understood his writings. Surprised and satisfied, he asked me, "May I ask, what do you think of my writings?"

I said: "I am becoming a Jesuit casuist in all the particularity that that means. I am, if you will, at the opposite end from you of the lively spectrum of theology. You let me imagine the vastness of theology and you stimulate my imagination. I expect that I will not use your writings, but I have been forever changed by realizing just how small my field of Catholic theological ethics is on the landscape of Christian theology."

As I look back on reading L'Être ecclésial, I can see that Zizioulas (or was it the Spirit?) both lured me out of my autonomous ethics and prompted me to ask about relationality and led me to look for a personal conscience and a normative ethics based, not primarily on acting but on being, and therein, a virtue ethics, based on the person, not as an individual, but as primarily, constitutively relational.

[Jesuit Fr. James Keenan is the Canisius Professor of Theology at Boston College.]

Theology | Take and Read: Being as Communion