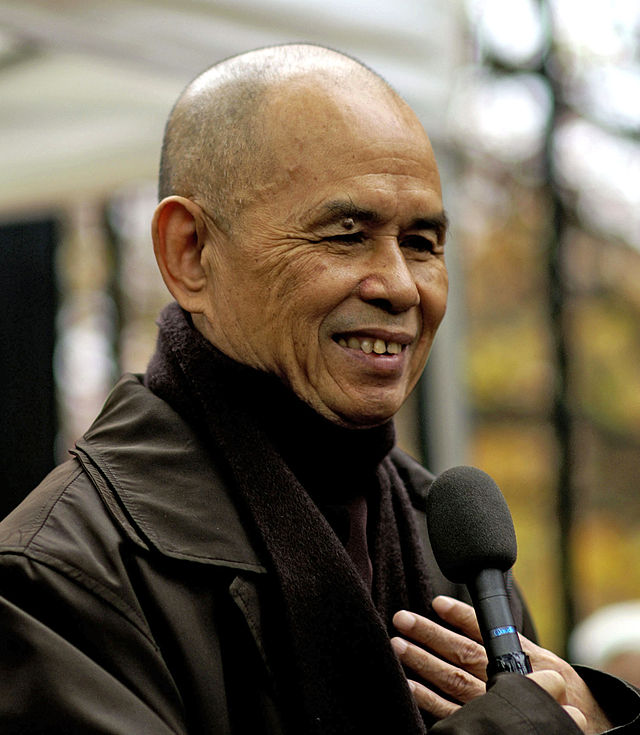 Thich Nhat Hanh, Vietnamese Buddhist monk, author, lecturer and peace advocate who has spread mindfulness meditation techniques around the world, experienced a severe brain hemorrhage Tuesday.  The 88-year-old spiritual leader is being attended to by doctors, nurses and his monastic disciples in a hospital in Bordeaux, France, where he has been ill since Nov. 1, according to a monastery spokesperson.

“He is still very responsive and shows every indication of being aware of the presence of those around him,” according to a released statement. “He is able to move his feet, hands and eyes. There are signs that a full recovery may be possible.”

Nhat Hanh reportedly has been in “fragile health” for the past two months. He was hospitalized Nov. 1 and had been gaining strength until his stroke.

Nhat Hanh has been a widely popular peace advocate whose work dates back to the mid-1960s when he was exiled from Vietnam during the war and settled in France where he has lived since. His efforts to generate peace and reconciliation once moved Martin Luther King, Jr. to nominate him for the Nobel Peace Prize in 1967 and to call him "an apostle of peace and nonviolence".

The Zen Buddhist monk has done much to popularize Buddhist thought in the west, traveling regularly through North America and Europe to lecture and lead retreats on "the Art of Mindful Living." He is the author of over 100 books including such titles as The Miracle of Mindfulness, Living Buddha, Living Christ, Being Peace, and Peace Is Every Breath: Daily Practices for Our Busy Lives.

Nhat Hanh’s key teaching is that, through mindfulness, one can learn to live happily in the present moment - the only way to truly develop peace, both in one’s self and in the world. In the foreword to Nhat Hanh's book, Peace is Every Step, the Dalai Lama wrote that the Vietnamese monk "shows us how to use the benefits of mindfulness and concentration to transform and heal difficult psychological states. He shows us the connection between personal, inner peace and peace on Earth."

A Nhat Hanh spokesperson said the ten monasteries founded by the monk worldwide have organized special chanting sessions to generate mindfulness energy to send healing powers to their ailing leader.

The monk has built a community of hundreds of monks and nuns worldwide, who, together with tens of thousands of lay students, apply his teachings on mindfulness, peace making and community-building in schools, workplaces, businesses – and even prisons – throughout the world.

Nhat Hanh founded what is called the line of “Engaged Buddhism,” Buddhism with a social front. It aims through mindfulness to address the world’s social ills.

Reflecting on death, Nhat Hanh has written:  "Our greatest fear is that when we die we will become nothing. Many of us believe that our entire existence is only a life span beginning the moment we are born or conceived and ending the moment we die. We believe that we are born from nothing and when we die we become nothing. And so we are filled with fear of annihilation. The Buddha has a very different understanding of our existence. It is the understanding that birth and death are notions. They are not real. The fact that we think they are true makes a powerful illusion that causes our suffering. The Buddha taught that there is no birth; there is no death; there is no coming; there is no going; there is no same; there is no different; there is no permanent self; there is no annihilation. We only think there is. When we understand that we cannot be destroyed, we are liberated from fear. It is a great relief. We can enjoy life and appreciate it in a new way."

He was due to join Pope Francis and other world faith leaders at a Vatican summit Dec. 2, hosted by the Global Freedom Network, to take action against modern slavery and human trafficking.

Fox is NCR Publisher and can be found on Twitter @NCRTomFox.