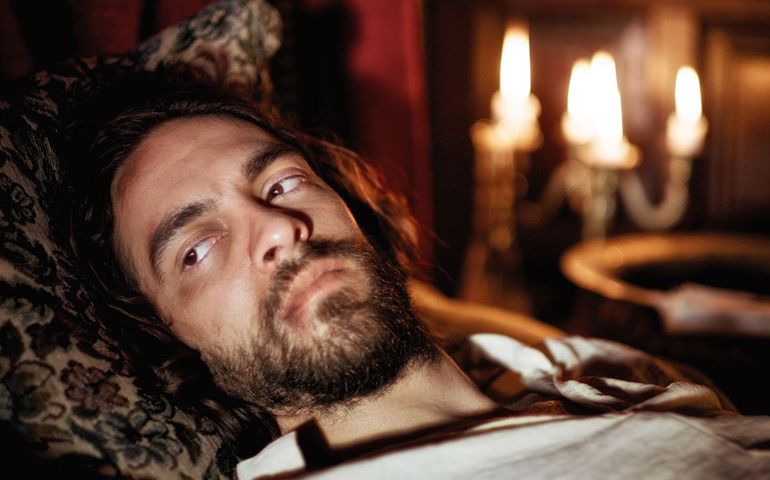 Pamplona, Spain, 1521. A young Spanish nobleman named Iñigo uncharacteristically spurns the advances of the prostitute Anna, and proposes instead to have an intimate conversation with her. In a deft pastoral icebreaker, he gently points out that her namesake is no less than the mother of the Blessed Virgin Mary, and then notes that Jesus' closest friends were prostitutes.

As he listens to her narrative of lost aspirations, Iñigo leads her into a simple spiritual exercise. He asks her to imagine Jesus sitting on an empty chair across the softly lit room. In a fragile, almost childlike tone, Anna reveals what she sees and feels -- Jesus smiling at her, dispelling her fears, accepting her as she is: "He does not care where I've been, he only cares where I am going."

This eloquently quiet scene is from the theatrical feature film "Ignacio de Loyola" (directed by Paolo Dy), a sweeping new biopic on St. Ignatius of Loyola produced by the Jesuit Communications Foundation (Jescom), the media outfit of the Philippine Jesuits.

"Ignacio de Loyola" is one of only three full-length features on the life of the founder of the Jesuit order -- the last being the 1949 Spanish film "El capitán de Loyola" -- and is thoroughly a work of Philippine cinema. With a shoestring budget of US$1.2 million, the all-Filipino production crew faced the herculean challenge of creating an epic-scale biopic via guerilla filmmaking, constructing sets and hand-sewing costumes in Manila, and then shipping them to shooting locations in Spain.

Drawing largely from the written autobiography of St. Ignatius, the film follows the transformative journey of knighted captain Iñigo into the contemplative-in-action Ignacio by way of old school narrative and a patient accumulation of detail.

In the film's first half, Iñigo is driven by militaristic ideals in the face of the 1521 siege of Pamplona, thinking it dishonorable to surrender to the attacking French army without a fight. He is fueled further by his chivalrous loyalty to the Princess Catalina of whose life he has sworn to protect, and he takes the heroic stance and rallies the remnant to stand up against the superior French forces as they bombard the citadel.

Cannonball fire shatters one of Iñigo's legs in the ensuing melee, and with it, his future as a knight. When the castle falls, the French extend a courtly gesture and offer assistance, eventually sending him back home to receive treatment. This period would descend into a dark night for Iñigo, throwing him into an existential abyss of boredom, depression, and protracted suffering, that would paradoxically serve as the fertile soil for his redemption and ultimate transformation.

The second half focuses on the turnabout of Iñigo following his encounter with written works of Catholic piety. Inspired by the hagiographies of St. Dominic and St. Francis of Assisi, Iñigo decides to leave the comforts of his privileged life and sets out on a pilgrimage to find his true calling. He immerses himself in deep contemplation at the shrine of Our Lady of Montserrat, and comes out of the experience a changed man. Donning beggars' rags, he begins a new life of faith and service as Ignacio de Loyola.

The film then ushers the audience into Ignacio's deepening mysticism, cinematically representing his journey to be as much internal as it is external. The rest of the film plays like an extended court sequence as Ignacio's Spiritual Exercises is subject to the scrutinizing eyes of the Spanish inquisitors.

Madrid-based actor Andreas Muñoz' passionate portrayal of Iñigo/Ignacio anchors the ensemble acting by an all-Spanish cast that is convincingly real. The actors deliver their lines in Castellano-accented English, sounding like close equivalents of their characters. For the most part, competently rendered artistic values infuse the film with a certain polish; the cinematography, sleek, the hues and lighting design, vivid. Although bordering on Hollywood baroque at times, the hand-embroidered costumes look remarkably detailed and authentic. In addition, the lush, full orchestra musical score, composed and conducted by Filipino maestro Ryan Cayabyab, beautifully complements both the historical context and the unfolding action.

That said, the film has technical flaws that are not so easy to overlook. The dramatic structure is rather uneven, presumably due to the exigency of ferrying details from the written source material to the big screen. There is a need, for instance, to tighten the first half -- over weighted as it is by verbose dialogue -- where the plot seems not to be moving forward. The siege of Pamplona sequence is an earnest effort to elevate the film to the prevailing standards of global mainstream cinema, but it is staged in a way that too closely references a comparable sequence in the 1949 film "El capitán de Loyola" so that certain elements look rather dated. And the scene when a crashing boulder lands on Iñigo's leg looks quite cartoonish, making you wonder whether this is the fault of a CGI fail or simply the artificiality of Styrofoam props. The cracks from a budget that is made to punch far above its weight class become apparent here.

To be sure, the film's heart is in the right place. It feels authentic. But it feels less so when it gets lost in its own pious intentions and opts for a more literal representation of Ignacio's mysticism. While the surreal sequence of Ignacio's struggle with his personal demons poetically conveys the depth and complexity of his evolving character, the soft-focus scene portraying the apparition of the child Jesus does the narrative no favors. It aligns the film with a well-known Filipino folk-Catholic film genre where the very sun dances and religious statues come to life, blurring the distinction between miracle and magic. This is all but redundant at this juncture.

Early on, the film effortlessly intimated that the real Ignatian miracle happens where it truly counts -- in the heart of a broken human being who, because of Ignacio's compassionate spiritual direction, is able to see Jesus in an empty chair.

For more information on the film, visit https://www.facebook.com/ignaciomovie.

In musical 'The Portrait,' beauty and truth resist materialism