Trump is unfit to be president of the United States 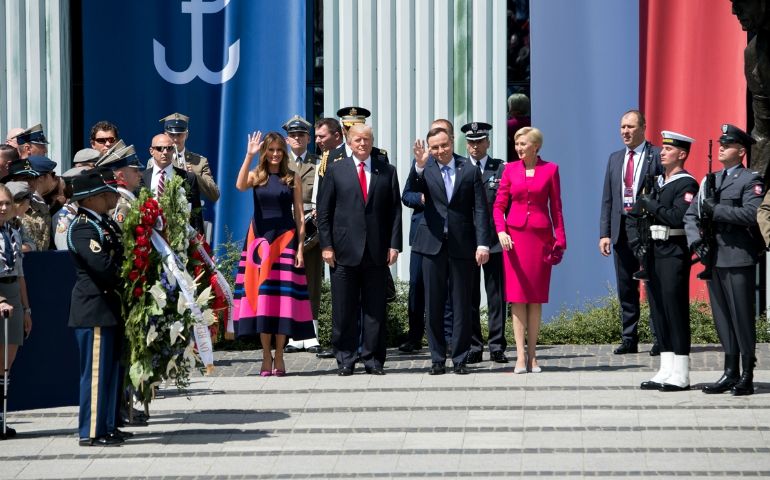 I have often referred to the Francis effect in speaking about Pope Francis. There is also a Trump effect that is not so positive. For me a good indication of the Trump effect is the latest news about New Jersey Gov. Chris Christie.

The governor closed state beaches because of a budget impasse. He then took his family to one of the closed beaches so they could enjoy the benefits of the Fourth of July weekend. These same benefits were denied to his constituents.

Christie projected a total disregard for the people he serves. When confronted with his actions, he simply stated that he doesn't care what anybody thinks. He notes that he is the governor and can do what he wants.

The indifference to those he is supposed to be working for and the willingness to satisfy his own wants at the expense of others are just so inappropriate, as well as unchristian. It seems to represent a coarsening of culture that has been encouraged by the actions and language of President Donald Trump.

Also on July 4, National Public Radio did a recitation of the Declaration of Independence. NPR has been doing this recitation on the holiday for a number of years. This year, NPR also decided to publish a series of tweets providing the complete text of this founding document.

Many Trump supporters were incensed that NPR would do something so unpatriotic. They voiced the sentiment that they wanted NPR defunded because its coverage was so unbalanced.

The response suggests a combination of ignorance of our history and our government, as well as a blindness produced by an unbridled partisanship incapable of hearing anything those we disagree with may be saying.

Trump demonstrates little knowledge of the issues and challenges our country currently faces. He is now on his second trip abroad, and his actions and words thus far are remarkable. Instead of defending our country, our values and our government, he has gone on the attack. He questioned the ability of our intelligence agencies to provide accurate and meaningful intelligence. He continues to suggest that we cannot be sure if Russia hacked into our election.

Additionally, while standing beside the president of Poland, Trump attacked former U.S. President Barack Obama for doing nothing about the Russian interference that Trump is not even sure occurred.

Furthermore, he attacked the American foundation of freedom of the press. He indicated that what is being written about him is fake news, and seemed to suggest that Polish President Andrzej Duda's recent restrictions on press freedom are a good idea that Trump might consider emulating.

Trump has acted in a way in which no president has acted before, and no president ever should. It is understood that a president should not be criticizing our country when he is on foreign soil. Trump has gone further in undermining the foundations of our democracy. He seems determined to erode some of the press protections of the First Amendment. What other changes is he contemplating to our two-centuries-old form of government?

This is not acceptable behavior for an American, let alone a president. It is not a one-time incident. During his first trip abroad, Trump refused to commit to following long-standing NATO agreements.

He has shown himself to be unable to conduct himself in an appropriate manner. He is doing harm to our country. He is offering himself as an example that is divisive, and one that works against inclusiveness. Instead of bringing people, races and cultures together, his actions are designed to identify the other as not part of our country. Muslims, immigrants, even legal ones, are viewed with suspicion because he views them with suspicion.

He criticizes our allies and praises our adversaries, especially those with governments that are antithetical to our way of life.

Trump has demonstrated that he is not fit to lead this country. He is already doing damage that may take years to repair.

He should be encouraged to resign.

Politics | Trump is unfit to be president of the United States

The state of the race: Republicans and the moral life of our country