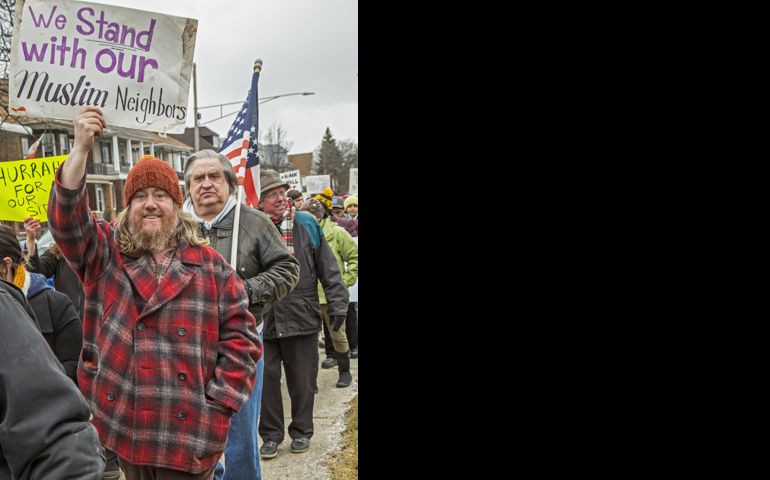 What is so wrong with the president's Muslim travel ban?

I am comfortable talking about the Muslim travel ban because President Trump tweeted that we could call his executive order whatever we wanted.

Everybody is arguing whether or not it is a BAN. Call it what you want, it is about keeping bad people (with bad intentions) out of country!

Now, a judge in the state of Washington, — appointed by President George W. Bush — has put the entire ban on hold. However, this is just the first salvo of a struggle that could go on for months or longer. Resistance is still critical.

The ban needs to be seen as a Muslim ban because Christians are given preferential treatment. The New York Times reported that President Trump "established a religious test for refugees from Muslim nations: He ordered that Christians and others from minority religions be granted priority over Muslims."

Pope Francis has spoken eloquently and repeatedly about what the Christian response should be to refugees and immigrants.

The ban will not make us safer. No refugee has brought us harm since the Refugee Act of 1980. No one from any of these seven countries has brought us harm. The ban is inconsistent for it does not include a ban on any of the countries that have produced terrorists harmful to us — Saudi Arabia, Egypt, the United Arab Emirates. It is also interesting that Arab countries where Trump has done business are not included in the ban.

Our troops in harm's way are less safe because we have chosen to ban Muslims from entering our country. Will Iraqi soldiers be more or less helpful now that this new ban is in place? How about our large Muslim community here in the United States? Are they now more or less likely to go to the authorities with information about potentially harmful individuals in our midst? Alienating the very people whose cooperation we desperately need is not a recipe for success in keeping us safer.

The ban in its current form excludes so many people who have every legal right to be here. These are people who have contributed and continue to contribute to our country. Green card holders are still having difficulty leaving and returning to the country. These are professionals, technical experts, medical personnel, etc. Students who went home for their semester break have been unable to return to our country to continue their education. The countless horror stories that are being told of problems individuals and families have had are heartbreaking.

Iraqis who worked with American troops, fought side by side with our troops, served as translators, interpreters, etc., are now being detained at airports. One has to ask whether these situations were intended by the framers of this policy. If not, then our government is showing itself as terribly incompetent, and showing a disturbing lack of understanding of the consequences of their actions. If the resulting chaos was intended, then one has to wonder just what some people are thinking at the very highest levels of our government.

We await definitive judgments on the legality and constitutionality of this executive order, but a number of points have already been made by legal experts. A Slate article notes five areas where the executive order can be challenged on constitutional grounds. These areas include the equal protection clause, the First Amendment, due process, habeas corpus, and family reunification rights. The article's authors recommend that the entire ban be struck down because it stereotypes and discriminates against an entire group of people.

Make no mistake, with this executive order, the Trump administration is dramatically changing what we know as the United States of America. It is heartening that lawyers, judges and the people in the streets are not allowing the change to occur without resistance. Our democracy is at stake, and unfortunately this is not likely to be the only area where dramatic changes will be attempted. It will take the resolve of all Americans to continue to push back.

If you believe I am overstating the case, ask yourself this question. Suppose the Supreme Court were to rule against President Trump on his Muslim travel ban. Would he just accept it and acknowledge that he had overreached and made a mistake? Would he recognize the authority of the judiciary as an equal branch of government? Would he consider defying the Supreme Court?