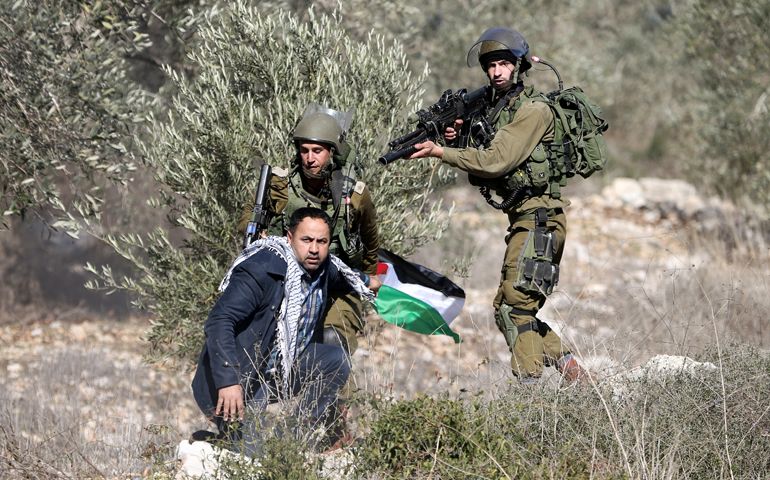 Israeli soldiers detain a Palestinian man during clashes following a protest against the nearby Jewish settlement in the West Bank village of Kafr. (CNS/Mohamad Torokman, Reuters)

One of the key questions that analysts and pundits have debated over is whether Trump the president will be different than Trump the candidate. In other words, will the gravitas of the presidential office temper and moderate Trump's "wrecking ball to the established order" approach or will he follow through on the campaign promises he made?

There are few places where the answer to this question is being anticipated as differently as in Israel/Palestine. Simply put, is a Trump presidency the final death knell of the universally accepted solution to the conflict between Israelis and Palestinians, two independent and viable states for two peoples, living side by side in peace and security?

If the last few months are any indication, the odds are that Trump as president will radically reorient U.S. policy on Israel/Palestine in a way that pulls the plug on a two-state solution that is currently comatose and on life support. The nomination of David Friedman as U.S. ambassador to Israel speaks loudly in its significance beyond the nomination itself.

Friedman, a bankruptcy attorney utterly lacking in any diplomatic experience, holds views on Israel/Palestine considered extreme even in mainstream Israeli society, including stated opposition to a two-state solution, implicit acceptance of Israeli annexation of large parts of the occupied Palestinian territories in the West Bank, and vocal support for moving the U.S. embassy from Tel Aviv to Jerusalem, something no country in the world has done due to the extreme sensitivity of the issue on a multitude of religious and political levels.

It would be easy to dismiss Friedman's extremism as the views of one man and not that of the Trump administration and the Republican Party it represents, but sadly that is not the case. Trump publicly pledged to move the U.S. embassy to Jerusalem in March 2016 at the American Israel Public Affairs Committee convention and on Jan. 22, Israel's Channel 2, citing an anonymous source, reported that the White House would announce the embassy move on Monday, Jan. 23, Trump's first full day in office.

The White House disputed such an announcement was imminent saying Jan. 22 through Sean Spicer, White House spokesperson, that "We are at the very beginning stages of even discussing this subject" but the very fact that such a move is now considered a "when" rather than an "if" is extremely telling.​

While no official announcement was made Monday, beyond Spicer saying that "We're at the very early stages of that decision-making process," all the signs point to a fundamental shift in U.S. foreign policy towards a solution to the Israeli-Palestinian conflict. In addition to the Friedman appointment and the Trump embassy move pledge, the Republican Party platform at its 2016 summer convention for the first time removed any reference to a two-state solution, instead "deferring to Israel on what the parameters of peace negotiations should be," according to Jewish Telegraphic Agency.

​Friedman's extreme views are perfectly in line with those of many Republican ​conservatives and it seems that now these beliefs have made their way into the highest levels of the U.S. administration​.

John Bolton, Former U.S. ambassador to the United Nations, a leading voice on the American right and a candidate for deputy secretary of state, dismissed the two-state solution as a "dead-end vision," instead reviving the infamous 1967 Allon Plan in a modified version where Israel keeps the major parts of the occupied West Bank where it has established settlements including the Jordan Valley, the rest of the West Bank joins up with Jordan in a confederation, while the Gaza Strip reverts to Egyptian control.

The abandonment of any pretense of U.S. evenhandedness and honest broker-ship between Israelis and Palestinians has found an enthusiastic audience in Israel where ​the current Israeli leadership pays lip service to a two-state solution but vigorously opposes it in practice.

With Benjamin Netanyahu as Israeli prime minister since 2009 the West Bank settlements have seen a 30 percent increase in population to 400,000. In occupied East Jerusalem, Israeli settlers have increased from 193,000 to 208,000. A map produced by the Jewish-American group Americans for Peace Now is chilling in its demonstration of the sheer extent of Israeli settlements on Palestinian land. All this on land that is supposedly to be negotiated over raising the obvious question, what will there be left to negotiate over if the land in question is already filled with settlers?

Since 2009, Netanyahu has had to increasingly rely on a fragile governing coalition of right-wing parties that are skeptical of or oppose the two-state solution outright. Demographic changes in Israel, an increasingly powerful and assertive settler movement, continued low-level violence with the Palestinians, and regional chaos and ISIS looming on the horizon have all contributed to an Israeli public that finds the status quo relatively peaceful and acceptable rather than adopting the risk and uncertainty of a two-state solution.

While a status quo of no negotiations, continued settlement activity and a new American administration that enables the Israelis along that path may seem like the least of all evils, it is in fact the death knell not only of a two-state solution but also of Israel as a Jewish and democratic state.

John Kerry, secretary of state for the Obama administration, has spoken hard truths to Israel on this. Referring to the current Netanyahu government coalition as "the most right-wing in Israel's history," Kerry warned that recent events are "cementing a one-state reality that most people do not actually want."

Kerry added that if the one-state reality becomes the default paradigm following the demise of the two-state solution, "Israel can either be Jewish or democratic, it cannot be both, and it won't ever really be at peace."

Kerry is right and his view has been echoed by Dennis Ross of the Washington Institute For Near East Policy and Stuart Eizenstat, former ambassador to the European Union, both hardly shrinking violets when it comes to their support for Israel. In a Washington Post opinion they write that "doing nothing is a prescription for drifting toward a one-state outcome, a result that, due to demographics, would mean Israel over time would become a binational state and no longer majority-Jewish and democratic."

The seemingly inevitable demise of the two-state solution paradigm will certainly not lead to John Bolton's fantasy of a modified Allon Plan, which is based on complete ignorance of the region and its dynamics. What it will lead to is what Kerry, Ross and Eizenstat have warned will come.

It will see Israel's Jewish population become an eventual minority and would sharpen comparisons between the Israeli occupation and South African apartheid. Calls for boycotts and divestment from Israel will increase and intensify in the West, particularly Europe, as will Israel's political isolation on the world stage.

Successive U.S. administrations have acted as the emergency brake on protecting Israel from this outcome by at least officially supporting an eventual two-state solution. If a Trump administration officially abandons this path, beginning with a move of the U.S. embassy to Jerusalem, then it must be prepared to deal with all the negative consequences for America and Israel that such a radical shift in policy entails.

CRS official: Gaza a 'complete catastrophe' on 'brink of collapse'