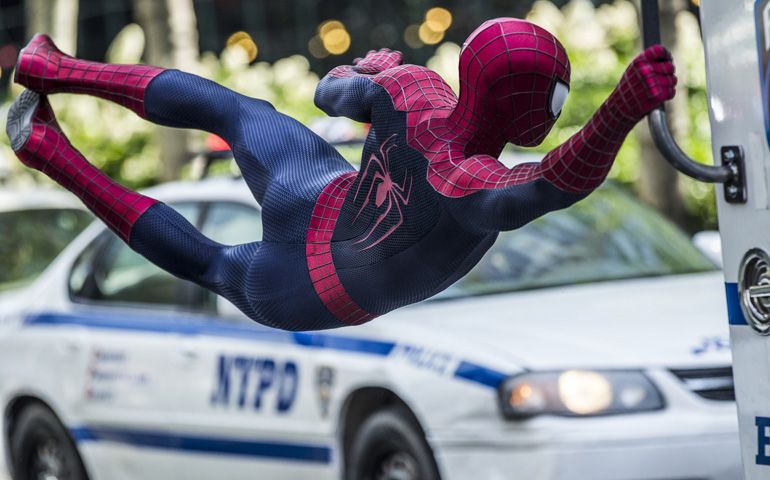 A scene from "The Amazing Spider-Man 2" (CNS/Sony)

Of all the comic-book-turned-into-movie superheroes, Spider-Man has always been my favorite. Despite the launch of this new franchise in 2012 with director Marc Webb at the helm, my favorite film about the araneae homo is Sam Raimi's 2004 "Spider-Man 2." It's one of the best interpretations of creator Stan Lee's teenage hero as a young man of character and virtue.

It's high school graduation day for Peter Parker/Spider-Man (Andrew Garfield) and Gwen Stacy (Emma Stone). Although Gwen's late father, Police Captain Stacy (Denis Leary), made Peter promise to stay away from Gwen, they are still close friends. She is the valedictorian and wants Peter there for her speech, and he is in a very good mood as he saves people and helps the police (who are not so grateful) stop criminals from stealing containers of plutonium that sunny morning.

When Spidey saves one of his greatest fans, Max Dillon (Jamie Foxx), an employee for Oscorp, the man cannot believe Spidey actually knows his name. He is so used to being invisible to co-workers that he is super-pleased.

Gwen gives a strong, moving speech about the power of hope, and Peter arrives just in time to grab his diploma.

Meanwhile, Harry Osborn (Dane DeHaan), Peter's childhood friend, comes home from boarding school just in time to speak with his father, Norman (Chris Cooper), the founder of Oscorp, before he dies. Norman speaks in a cruel manner to his son, telling Harry that he will die of the same genetic illness that is killing his father. Harry becomes convinced that Spider-Man's blood can heal him, and he asks Peter for help.

Max is a good man, and people take advantage of him all the time. One night, they ask him to stay late at the company and, while trying to fix something, Max falls into a vat of electric eels, starting a chain reaction that plunges the city into darkness and has a drastic effect on Max.

And we are off and running through a special-effects extravaganza that is possibly the loudest movie I have ever experienced. (No one will notice through their 3-D glasses if you use earplugs; just put them in after the lights go down.) I predict an Oscar win (skip the nomination, head straight to "Go") for "The Amazing Spider-Man 2" for special effects.

Despite the prolonged sequences of expected, though not always predictable, conflict, there are very human moments from an adolescent perspective that explore themes of family, father-son relationships, virtue, character, love, sacrifice, courage, loneliness, emotional pain, sorrow, grief, and, above all, hope. The larger social and ethical issue of genetic engineering remains dominant.

Aunt May (Sally Field) has to work two jobs to pay Peter's college tuition and keep a roof over their heads, and she does so willingly. Peter goes into a dark place as he tries to figure out his father's story and what he was involved with at Oscorp. He pressures May to tell him the truth about his father (Campbell Scott) as she understands it. It's very interesting that although Peter's mother (Embeth Davidtz) is shown in the film and has a couple of lines, there is no mention of her during all the talk about their family. That seemed a little odd to me.

Max's story is filled with pathos. He is so lonely that his admiration for Spider-Man is limitless. But at a certain point, he can no longer stand being ignored and invisible when he is actually a brilliant scientist with much to contribute. His is a cautionary tale for all of us to notice the people around us and call them by name.

Comic book violence is, unfortunately, not helpful. This film is very violent but only garners a PG-13 rating because blood does not flow. The city is blown up and, all of a sudden, it's put back together again. There are no consequences to the film's violence, and when there is a death, it seems impossible. There's much to talk about with films like this because with so many of these violent films aimed at a young audience flooding the market, someone has to tell kids that violence is not the Christian way to resolve conflict.

I don't want to give away the ending, but for the first time that I can remember, Spider-Man wields something as a weapon. Makes me wonder what's in store in the sequels that are coming. Will the writers feel they have to up the ante, as they did with last year's "Man of Steel," and have the hero shoot and kill a foe? I hope not.

Spider-Man was created as a standalone teenage hero, not as a sidekick, by Stan Lee in 1963. Lee was able to create a lasting origin story that doesn't seem to get old. Peter Parker is an orphan who was practically left on the doorstep of his great-aunt and great-uncle as his parents fled. Although we have "YA," or "young adult," literature series (think "Twilight" and the newest, "Divergent," that feature adolescents struggling through their teen years to adulthood) being made into films that are hugely popular, there's something about comic book heroes -- and the occasional heroine -- that can still capture the imagination through top-of-the-line film productions and the collaboration of many writers. Too many writers often spoil the soup, so to speak. But here, the story is cohesive, poignant, hopeful, long and very loud. Did I mention that?