Skip to main content
Vatican
This story appears in the The Field Hospital feature series. View the full series. 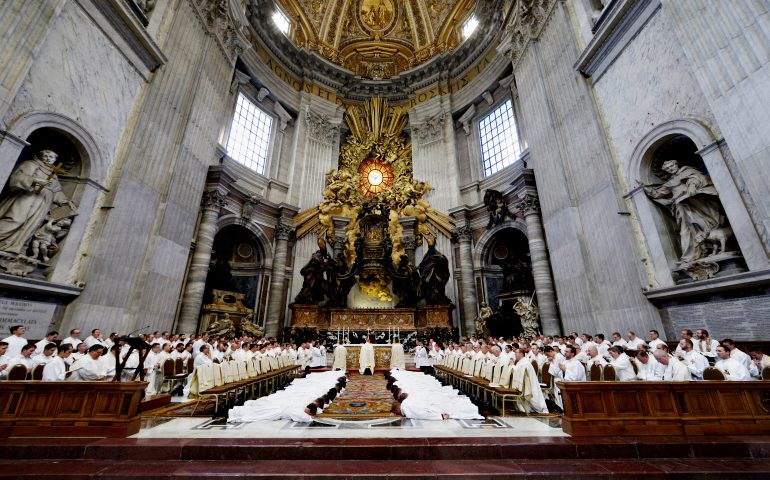 Declarations in the Vatican Congregation for the Clergy's recent document "The Gift of the Priestly Vocation" have been called "disrespectful," "ambiguous" and "insulting" by the Association of U.S. Catholic Priests.

In a statement released April 19, the 1,200-member Ohio-based organization charged that "the terms 'homosexual tendencies' and 'deep-seated homosexual tendencies' are ambiguous and disrespectful of the personhood of those who identify with a homosexual orientation." The terms appear in the Dec. 8, 2016, document's section titled "Persons with Homosexual Tendencies."

"We find it also unfounded and insulting," the group said, adding that the clergy congregation document "implies that ordained priests with a homosexual orientation who serve the Church with distinction 'find themselves in a situation that gravely hinders them from relating correctly to men and women.' "

"If the Congregation for the Clergy document had stated that heterosexual and homosexual persons who are living chaste lives can be admitted to ordination to the priesthood it would have been more respectful and inclusive. The issue for discernment is whether the applicant or candidate has integrated his sexual identity with Catholic Christian faith and spirituality," said the statement, which was authored by the association's 12-member leadership team.

Although approved by Pope Francis, the document flies in the face of his World Day of Peace 2017 message and is inconsistent with teaching in the 1997 U.S. bishops' Committee on Marriage and Family statement "Always Our Children," argued the priests' group.

In its 90-page December 2016 document, the Congregation for Clergy stated, "The Church, while profoundly respecting the persons in question, cannot admit to the seminary or to holy orders those who practice homosexuality, present deep-seated homosexual tendencies or support the so-called 'gay culture.' "

On its release, "The Gift of the Priestly Vocation" was criticized for lack of nuance in an essay by Francis DeBernardo, executive director of the LGBT Catholic organization New Ways Ministry.

Several commentators have noted the new instruction's section on homosexuality and the priesthood echoes content and language from the 2005 document from the Congregation for Catholic Education titled "Instruction Concerning the Criteria for the Discernment of Vocations with regard to Persons with Homosexual Tendencies in view of their Admission to the Seminary and to Holy Orders."

Among additional topics, the new document also deals with the value of indigenous and immigrant vocations and guarding future priests against clericalism.