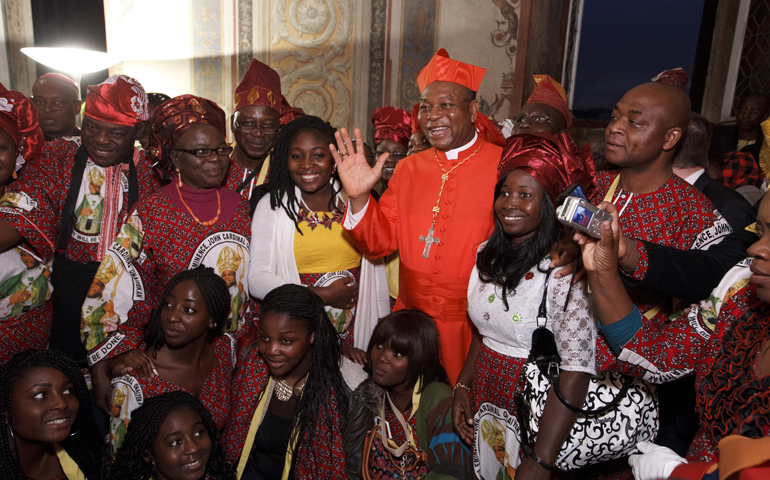 New Cardinal John Olorunfemi Onaiyekan of Abuja, Nigeria, poses with pilgrims from his country during a reception for six new cardinals Saturday in the Apostolic Palace at the Vatican. (CNS/Paul Haring)

Pope Benedict XVI said he wanted his Nov. 24 consistory, the fifth of his papacy, to express the universality of Catholicism. His choice of six new cardinals from every continent except Europe was designed to convey, as he put it Saturday, that the church belongs "to all the peoples" and expresses itself "in the various cultures of the different continents."

If my experience at Rome's Urban College yesterday is any indication, you can consider the point made.

Over the years I've covered seven consistories, the events in which a pope creates new cardinals. As part of the experience, I've also attended scores of post-consistory receptions, both the ones staged by the Vatican inside the Apostolic Palace (the only time that the doors of the place are flung open to the general public), and ones hosted by other parties – diplomatic embassies, Catholic organizations such as the Knights of Columbus, and so on.

By any standard, the reception my wife and I witnessed on Sunday afternoon was not your typical Roman affair. It featured not one but three different African dance and vocal troupes, a buffet with classic African dishes such as tuwo shinkafa (a thick rice pudding served with spicy soup), and the new cardinal himself sashaying to the head table as drums pounded and Ibo singers serenaded his arrival.

The guest of honor was Cardinal John Onaiyekan of Abuja, Nigeria, one of six new cardinals elevated over the weekend. Aside from American Cardinal James Harvey, the longtime prefect of the papal household, the other five came from outside the West. In addition to Onaiyekan, they were:

One bit of proof that this consistory belonged to the whole world, and not just the West, is that the Lebanese contingent celebrating Raï's red hat included a delegation from Hezbollah, which is seen in the West as a terrorist group but which functions in Lebanon as a political party and mainstream social movement.

Each consistory tends to have its rock star cardinal, the one guy who towers over the others in terms of media appeal, the size of the crowds he draws, and so on. This time the rock star was probably Tagle, mostly because he's seen as "the great Asian hope," meaning the most credible contender from his part of the world to become pope someday.

The 55-year-old Tagle is the real deal, a genuine intellectual with a popular touch, and perhaps the best natural communicator among the Asian bishops. During the recent synod on evangelization, he won both hearts and minds by arguing for a humbler, simpler church with a greater capacity for silence.

Yet each of the new cardinals illustrates the staggering universality of the church, and Onaiyekan is a good case in point. Not only is he a reminder that Africa is still under-represented in the College of Cardinals relative to its Catholic population, but Onaiyekan's biography also reflects the unique social role church leaders often play on the most intensely religious continent on the planet.

My wife, Shannon, and I have known Onaiyekan over the years, and so we went out yesterday to his reception at the Urban College, by tradition the main institution in Rome for seminarians from the developing world. The event was hosted by Ambassador Francis C. Okeke, who recently became Nigeria's first full-time residential envoy to the Holy See. (Nigeria already had diplomatic relations with the Vatican, but until earlier this year the relationship was managed out of the country's embassy to Spain.)

Among the VIPs on hand were Cardinals Peter Turkson of Ghana, president of the Vatican's Pontifical Council for Justice and Peace, and Laurent Monsengwo of the Democratic Republic of Congo. (Nigeria's other cardinal, Francis Arinze, is in the hospital recovering from a knee problem.)

The Urban College, known in Rome as the "Urbanianum", sits cheek by jowl with the North American College, the residence for American seminarians. Yesterday, however, it was clear we were in a different cultural world. As we walked in, we were greeted by a conga line of colorfully dressed Africans playing drums, dancing and singing, while guests milled around outside wearing traditional dress festooned with Onaiyekan's image.

Once inside, Italian waiters wearing white jackets struggled to deliver the traditional Nigerian dishes on the menu – more than once, I witnessed feisty Nigerian women chiding them for serving this stuff incorrectly. (When one put a ball of dough on my plate without the spicy soup that's supposed to go over it, five different people testily pointed out the faux pas, and people at my table wouldn't rest until I got it right.)

In effect, the reception was a celebration of the 68-year-old Onaiyekan's career. Appointed to lead the church in Abuja, the national capital, in 1992, Onaiyekan has long been seen as among the best and brightest of the African bishops – not only a spiritual leader but a tribune of the African people, a de facto voice for civil society in African affairs.

Nigerian Fr. Paulinus Odozor, a longtime friend of Onaiyekan and the first priest he ordained as a bishop, now serves as an associate professor of Christian ethics and the theology of the world church at Notre Dame in South Bend. (By the way, he has both the starting quarterback and the back-up for the #1 Fighting Irish football team in class, describing them both as basically pretty good students.)

In a toast to his friend, Odozor called Onaiyekan "the closest thing to a Prime Minister Nigeria has," saying that Onaiyekan "has a particular place in his heart for those who have nobody to speak for them."

Odozor also told the reception that Onaiyekan "helped save democracy in Nigeria, and every Nigerian knows it" – eliciting raucous applause from the roughly 400 Nigerians who had travelled to Rome to celebrate Onaiyekan's elevation.

Among other things, Odozor was referring to a famous Christmas sermon delivered in 2005 by Onaiyekan in the presence of Olusegun Obasanjo, a former general who ruled the country in the 1970s as a military dictator and as its elected president from 1999 to 2007. Especially during his second term as president, Obasanjo's administration drew charges of systemic corruption and anti-democratic tendencies.

Ironically, the sermon was delivered in Abuja's sparkling new national cathedral, built by Obasanjo, himself a born-again Christian, to rival the national mosque next door. If Obasanjo expected that such largesse ought to buy the acquiescence of Christian leaders, Onaiyekan certainly torpedoed that strategy.

Taking advantage of his platform, Onaiyekan bluntly urged Obasanjo to prepare democratic elections in 2007 rather than scrapping the constitution so he could claim a third term. Onaiyekan cleverly crafted his remarks as praise, expressing confidence the president would "resist the deadly temptation to want to remain in power perpetually by hook or by crook," but the message was clear.

Obasanjo was said to have fumed privately, but eventually he took Onaiyekan's advice and stepped down.

Onaiyekan's message had credibility, and not simply because Obasanjo is a Christian in a country where the political class has traditionally been dominated by Muslims, so most people would have expected Onaiyekan to blindly support him. Onaiyekan also hails from Yoruba country, the same tribe to which Obasanjo belongs. Onaiyekan's willingness to set aside tribal logic in order to speak for all Nigerians was thus impressive, and potentially decisive in laying the basis for a peaceful transition of power – albeit in elections that most observers regarded as flawed.

Odozor called Onaiyekan not only a "pastor with a big heart," as well as an African version of what academics call a "public intellectual."

In sum, both the reception on Sunday and the man who was at the heart of it illustrate not only the universality of the church, but also just how relevant it can be, no matter what global neighborhood we're talking about, when a leader comes along who knows how to spend its moral and social capital wisely.

Bottom line: This may have been a small consistory, but with guys such as Tagle and Onaiyekan in the mix, it still packed quite a punch.