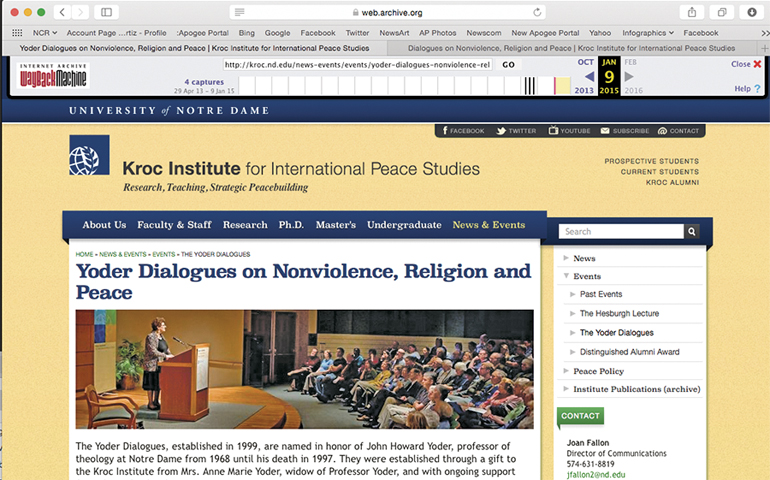 The Wayback Machine, an Internet archive website, shows the Jan. 9, 2015, version of the Kroc Institute's page for the Yoder Dialogues on Nonviolence, Religion and Peace.

Sexual abuse allegations against theologian John Howard Yoder are decades old. The officials who chose to either ignore his past or bury it are mostly dead. The institutions where the misconduct happened have since enacted policies to prevent such harassment. And Yoder is no longer a threat, having died in 1997. So why is his story worth revisiting?

Rachel Goossen, the historian who recently researched Yoder's past for the Mennonite church, said that Yoder's works and writings did not die with him. They continue to be reprinted and have a formative place in the theological realm. Such studies require context.

"It's important to know that while he was incredibly influential in his lifetime and also after his death in his writings on nonviolence, Yoder was also perpetrating violence in his private life and using his religious status to make things happen for himself," Goossen said. "If they're going to interpret his writings, they should have information about this extraordinary theologizing that he did that was very harmful to women."

While many of the key players in the story have died, she added, most of his victims -- who were typically decades younger than Yoder -- are still alive.

"For victims, this is a kind of validation of their experiences that they were not feeling from church institutions in the '70s and '80s," she said.

Skeptics might wonder, couldn't these women have dealt with this as it was happening?

According to Ruth Krall, a Mennonite counselor who worked with several University of Notre Dame students who accused Yoder of abuse, the feminist community in those decades lacked the language that could have helped these victims. Everything was considered either a "rape" or an "affair," she said.

Sexual harassment was often considered an affair, implying the act was consensual, so women were more inclined to blame themselves. It wasn't until the '80s, Krall said, that they began to talk about how a "power differential" might affect the narrative.

On March 22, the Anabaptist Mennonite Biblical Seminary -- formerly Goshen Biblical Seminary, where Yoder taught for 24 years -- gathered for a reconciliation service (NCR, April 10-23), acknowledging the harm inflicted upon students, both through Yoder's abuse and the seminary's silence. Since that service, Krall said, many more of his victims have come forward, wanting to share their stories.

Notre Dame has not formally recognized Yoder's misconduct, but there are signs that his legacy is being reexamined.

Annually since 1999, the university has invited through its Kroc Institute for International Peace Studies a leading scholar or peace activist to deliver a lecture that was titled the "Yoder Dialogues on Nonviolence, Religion and Peace." Yoder's name was dropped from the title in May, even though he was a founding fellow of the institute and the lecture series was established with a gift from his family and his wife, Anne Marie Yoder.

Joan Fallon, the institute's director of communications and marketing, told NCR that Yoder's name was dropped "simply to ensure that public awareness of this event stays focused on the important themes of nonviolence, religion and peace."

To better understand Yoder's legacy, Kyle Lambelet and Brian Hamilton, graduate students at Notre Dame, presented an essay, "A Dark Theme Revisited: How to Read Yoder's Sexualized Violence," at a faculty-student research colloquium March 25. According to Lambelet, their paper argues "that theologians and ethicists must read Yoder's sexual violence alongside his written work."

Krall said, "It's not about punishing or trashing anybody's reputation, but if none of us know the full truth about the institution, then what I know from systems theory is that this stuff tends to keep happening. ... The people in the pews need to think about this."

But this isn't "just a Notre Dame story, or a Northern Indiana story, or a North American story," Goossen said, as Yoder travelled the world on behalf of the same institutions that failed to stop his abuse. She said that since her article "Defanging the Beast" was published in The Mennonite Quarterly Review in January, as well as translated into German, religious leaders all over the globe have reached out to her, asking how they can provide pastoral care for those affected by Yoder.

"In coming clean and being institutionally accountable, we can work at preventing this in the future," Krall said. "If you care about your church, then you have to speak up and tell the truth. ... That's not hostile to the church, but calling the church to its true mission."