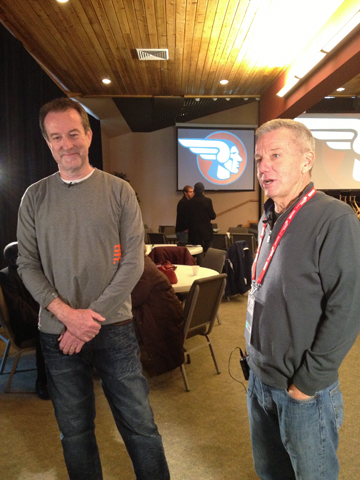 Ralph Winter, a producer for the "X-Men" films, left, and Robert Johnston, professor of theology and culture at Fuller Seminary, are interviewed for the Windrider Forum website.

Ever since I was assigned to Los Angeles in 2002, I have wanted to come to the Sundance Film Festival. Colleagues and friends from Family Theater/Angelus Student Awards and Fuller Theological Seminary were making plans to attend and create some kind of event for students. In 2004, John and Ed Priddy, award-winning film producers, in collaboration with the above, began the Windrider Forum. They had discovered The Branch, a Christian church in Park City, and the pastor generously provided space -- and continues to do so -- for students and filmmakers to converse about cinema. The church makes arrangements for students to stay with host families so this weeklong forum would be affordable for all.

"Over the years, the event has expanded from 40 people to 120," said Robert Johnston, professor of theology and culture at Fuller Seminary in Pasadena, Calif., "and now Windrider includes students and faculty from Biola University, Taylor University, Northwest College, Point Loma College and Brigham Young University."

Johnston, who is on hand to speak with students and to guide some question-and-answer sessions with filmmakers during the forum, continued, "The event is broadly ecumenical. For the last four years, the leadership from Angelus Awards from Family Theater Productions (headed by Holy Cross Fr. Wilfred Raymond) were deeply engaged and brought Angelus Award-winning filmmakers and their films to the forum and engage in conversation. The hope is that film and theology students from Catholic universities will participate in the Windrider Forum in the future."

For Johnston, who has authored and edited several books on theology, film and culture, the enthusiasm for the Windrider Forum is warm.

"As a professor of theology, teaching at a seminary, I value the opportunity to interact with filmmakers and to explore with them what motivates them personally and spiritually to make their films," he said.

"What everyone discovers (about Sundance films) is that to make an independent film, you have to believe in something passionately, and indie filmmakers do not enter into a film project casually," he continued. "In a huge way, an independent film comes out of something deeply embedded in their soul, and through the opportunities at Sundance, first of all, and the Windrider Forum, we are invited into their conversation with the world and with us, the audience."

I have known and collaborated with Fuller Seminary through their Reel Spirituality project since 1999, and Rob and others told me many times, "If you are ever at Sundance, we'd like to involve you in the forum." When, through NCR, it became possible for me to attend the festival this year, I was invited to conduct a question-and-answer session one morning at the forum and to be on the opening panel to talk about different lenses through which to view Sundance films. The organizers found me two host families, one with the secretary of The Branch (Janet, a true guardian angel) and then with a Mormon family (so generous) when Janet's kids arrived for the festival. The forum arranged for housing for me in return for a few articles for the Reel Spirituality site over the next year. Two are already up and can be found here.

Before moving on to more reviews, I'd like to return to "God Loves Uganda." In my review, I admitted to some ambivalence about it because I thought the director did not interview representatives from the Catholic church or others who might have made the film more credible.

During the Q&A at the Windrider Forum on Jan. 24, director Roger Ross Williams made his case very clearly. Indeed, the trailer he showed us contained footage of one gay man who had been beaten as a result of the anti-homosexuality efforts in Uganda. Williams also said the extreme evangelicals came to Uganda preaching against the same things they did in the United States, homosexuality (an element of the culture wars) especially, their words making it into a threat and whipping up emotions that could, and did, lead to violence against gays, lesbians and others. The Ugandan pastors, to maintain the flow of American dollars into their bank accounts, repeat the message they receive. If the Anti-Homosexuality Bill passes, there is great fear that violence against LGBT persons will increase. Added to this, these pastors claim that homosexuality did not exist in Africa before the supposed ongoing invasion from the West. Instead, there is documented evidence that gay people have existed in Africa for a long, long time.

Just after midnight on the morning of Jan. 1, 2009, a fight broke out on the BART subway system as it pulled into the Fruitvale stop in Oakland, Calif. When the transit police arrived, the fight subsided, but the cops pulled off several black men who looked like perpetrators and made them sit along a wall, pointing Tasers at them. The men were resisting, but not in a threatening way. Oscar, who was on parole but clean and not drunk, was obviously worried. A cop pulled out a gun and shot him. Oscar was taken off life support a few hours later, and the shooting was almost immediately ruled a homicide. This happened because many cellphone videos of the police kicking the men and then shooting Oscar were on YouTube practically before the EMTs got Oscar to the hospital.

This stark film by first-time director, 26-year-old Ryan Coogler, chronicles the life of Oscar over the 24 hours that preceded the shooting. Oscar, 22, an unmarried and unemployed father of a 5-year-old girl, was no saint, but he was trying to grow up and clean up his life. He had a kindness about him that was very appealing. If you get to see this film, you'll notice the filmmakers' technique of showing on screen the texts Oscar sent and received. If other films employ this, it could become a cliché, but here it is powerful because of the role that cellphones played in attaining a modicum of justice for Oscar Grant. This film could get a top Sundance prize, at least if you go by the buzz. (Editor's note: On Sunday, "Fruitvale" was indeed awarded the U.S. Grand Jury Prize: Drama.)

Stuart Hall, born in Kingston, Jamaica, in 1932, is a cultural theorist, and along with Raymond Williams, is considered the foremost leader and academic in the field of British cultural studies that considers how individuals and communities create identities and how institutions of power seek to impose identities on the same.

I encountered Stuart Hall when I was studying education in media studies as a graduate student at the University of London from 1993 to 1995. Stuart Hall looked at language as a symbolic system or collection of them (semiotics) and the ways that race, economics, popular media, music and, to limited extent, religion played into systems of power and cultural shifts from the 1950s until recently.

Akomfrah and his crew reviewed 8,000 hours of archival footage, most from the BBC and the British Film Institute, to create a timeline of Hall's life story and the people and ideas that influenced him. The soundtrack of Hall's life in the film and in reality is the music of Miles Davis (1926-1991) that the filmmaker deftly uses as markers and expressions for the life and times of Stuart Hall (both Akomfrah and Hall are lifelong fans of Davis' jazz.)

The film is long, too long for the unintentional audience. Indeed, only about a quarter of the audience remained for the question-and-answer segment. I understand this because when I first encountered Stuart Hall, it took some effort to get my head around what he was saying. But it is a historic achievement that documents Hall's important contribution to understanding ourselves, emerging identities of our communities, the relationship between communities and institutions of power, clashes marked by violence and clashes in the arts, in the search for and creation of cultural identities.

Of all the films that I have seen so far at Sundance, "Upstream Color" is the most enigmatic. At the Q&A after, writer/director/actor Shane Carruth responded to a question about how a script for this film might look.

Here's the description from the Sundance catalogue: "A man and woman are drawn together, entangled in the life cycle of an endless organism. Identity becomes an illusion as they struggle to assemble the loose fragments of their wrecked lives."

That doesn't sound like the movie I saw. The "emotional organism" (said the director after) was "tactile and its reality just beyond reach." Henry David Thoreau's Walden "became the vocabulary of the film" (oh, how I wish I had read it recently) and "that was a mythical guide to how identity becomes something."

I met several people who appreciated the film and the music Carruth composed as he wrote the script.

This film made me yearn for "Austenland" more and more, but as the festival draws to an end, it does not seem that any more tickets to this film are to be had.