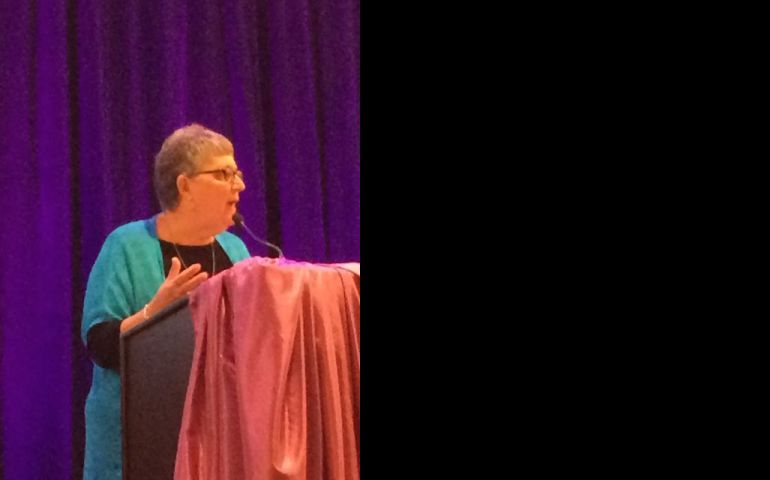 Philadelphia — As women ordination advocates trickled in from around the globe, Women’s Ordination Worldwide 2015 (WOW) got underway here just one week before Pope Francis is set to step foot in the city.

The timing of the conference with the papal visit is no coincidence. This meeting, focusing on the need for radical structural change, is aimed at sending a strong message to Francis and the wider church.

Sponsored by the U.S.-based Women’s Ordination Conference (WOC), this week’s gathering is the third time in 15 years that ordination advocates have gathered to lament what they see as a major failure by the bishops to end gender discrimination within the church.

WOC organizers estimate some 500 delegates will participate in the gathering during its three days of meetings, speeches and workshops. Dozens of exhibitors have already set up tables on the 4th floor of the downtown Marriott hotel here, hoping to draw delegates’ attention. Most exhibitors share visions of a reformed Catholic church.

Mary E. Hunt, speaking on a morning panel, listed reasons the women should celebrate during the meeting. At the top of her list, she said, was the fact that women have “avoided being co-opted” into the Catholic priesthood while it remains a strictly hierarchical and closed institution.

Hunt, co-founder and co-director of the Women’s Alliance for Theology, Ethics and Ritual (WATER), said feminists, meanwhile, have helped shape liberation theologies and have changed the field of theology “from a clerical, ecclesial science to a lay and communal art.”

She said feminist ministries have also radically changed the shape of the church and that women have not waited to create new models of church, engaging in their own liturgies and social ministries.

Hunt spoke about the work that needed to be done by the women. She said: “The point is not whether women have successfully become what men tell us we cannot be due to our nature/anatomy and their limited understanding of our shared tradition. Rather, the task at hand is to see how the marginalization of women by men, whether in priesthood or elsewhere, reinforces structures of inequality and injustice of many sorts that have shaped power throughout the world.”

Hunt explained: “For Catholic feminists, the job is not to get a few women into kyriarchal structures in the feeble hope of changing them from within. Rather, it is to envision and construct new models and new movements (some may be churches) in which people of good will cooperate to eliminate injustice and live harmoniously on a healthy Earth.”

The streets of downtown Philadelphia are lined with banners welcoming Pope Francis. However Hunt cautioned that the enthusiasm Francis’ visit is generating could reinforce the image of a dysfunctional papacy, making structural reform more difficult.

“I join those who laud this pope on matters of economics and the environment, among other things,” she said. “But I lead those who critically analyze internal church matters and conclude that even what is positive about Francis’ papacy needs to be marked with an asterisk when it comes to half of the world and half of the church. I wish it were otherwise because I know what greater power we could marshal to heal a broken world if only the brokenness of our own community were healed.”

Elisabeth Schüssler Fiorenza, feminist theologian at Harvard Divinity School, spoke to the gathering about the way Pope John Paul II successfully co-opted feminist theological with papal language on the “feminine genius.” She traced John Paul’s strict separation of gender roles to European ideas popularized during World War II. This theology, she said, stresses the maternal motherhood and rests on notions that men and women are “essentially” different but complementary.

According to Schüssler Fiorenza, Pope Francis has picked up this thinking, which celebrates the “feminine genius.” She said, however, this notion cannot be sustained in the face of the reality of poor women.

“The most pressing need for WOW is to create feminist spaces for discussion of feminist theologies of liberation,” she said, adding that there is a great need for these now.

“We need to become the virus that challenges Kyriarchal theology,” she said.

Later in the day delegates watched the well-crafted feature-length documentary, "Radical Grace," which is beginning to be distributed into local communities. The documentary highlights the work of U.S. women religious who have, at times, been at odds with the church hierarchy on matters of advocacy and ideas of inclusion. From confronting U.S. bishops over the Affordable Care Act, to protesting for women's equality at the Vatican, "Radical Grace" follows three sisters who are transforming the image of women religious, U.S. politics, and even the church itself.

As modern-day nuns, Simone Campbell, Jean Hughes and Chris Schenk lead very different lives. Yet they are united by the common bonds of fierce devotion to their faith and commitment to the Catholic social teachings of justice, equality and freedom from poverty and oppression. Campbell works for social and economic reform via legislation like the Affordable Care Act. The documentary captures NETWORK's first "Nuns on the Bus" tour. Schenk works to restore women’s leadership in the Catholic Church. It reveals stunning Roman mosaics of women bishops and priests dating back to the earliest days of Christianity. And the now deceased Hughes carries out her ministry on Chicago’s violence-plagued West Side, providing services to the formerly incarcerated.

Radical Grace is partnering with community organizations to help bolster grassroots and digital campaigns promoting women’s leadership and equality.  Its producers ask those wishing to screen the documentary in their local communities to make the request at their website.

[Fox is NCR publisher and director of Global Sisters Report. He can be followed on Twitter @NCRTomFox and reached on email at tfox@ncronline.org.]

Women’s ordination: WOW delivers its message to the world