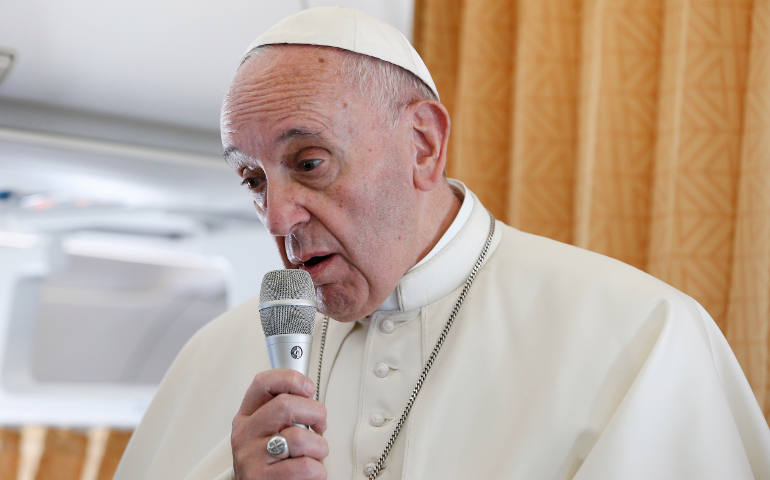 Pope Francis speaks to journalists aboard his flight from Rome to Krakow, Poland, July 27. (CNS/Paul Haring)

On Wednesday, Pope Francis captured headlines when he declared “we are at war” to journalists aboard the papal plane on the way to World Youth Day. Francis’ comments came the day after a French priest was slain by two attackers allegedly connected to the Islamic State group.

"For some time we can say that the world has been at war, piece by piece," Francis said, comparing the current situation to World Wars I and II. "It is perhaps not as organic, but it is organized and it is war."

"Let's not be afraid to say this truth," Francis said later. "The world is at war."

The comment reflects a view the pope has shared in the past on several occasions, suggesting a theme arising out of Francis’ papacy.

Francis declared the world is at war in September 2014, when he met with a delegation of 40 prominent Jewish leaders.

Ronald S. Lauder, who led the delegation, told reporters that the World Jewish Congress and the pope were "in absolute agreement" in condemning militant attacks on Christians in the Middle East and said the pope had compared the persecution to past attacks on the Jews.

"Francis told us privately that he believes we are in World War III, but unlike the first two world wars, instead of happening all at once, this war is coming in stages," Lauder said.

He added: "[The pope] said first it was your turn and now it is our turn. In other words, first Jews suffered savage attacks that were met with the world's silence and now it is Christians who are being annihilated and the world is silent.”

A month later, in an Oct. 28, 2014, address to the World Meeting of Popular Movements, Francis said that we are going through “World War Three but in installments.”

In a message to national ambassadors accredited to the Vatican on Jan. 12, 2015, Francis said a global “culture of rejection” is causing “a true world war fought piecemeal.”

"It saddens us to see the tragic consequences of this mentality of rejection and this 'culture of enslavement' in the never-ending spread of conflicts," said Francis. "Like a true world war fought piecemeal, they affect, albeit in different forms and degrees of intensity, a number of areas in our world."

"Here, in your presence, I appeal to the entire international community, as I do to the respective governments involved, to take concrete steps to bring about peace and to protect all those who are victims of war and persecution," Francis continued later in the address.

In an audience with young people in Turin, Italy, June 22, 2015, Francis spoke of the wars of the world.

“Very often we breathe an air of distrust in life,” he said. “There are situations that make us think, 'But is it worth living like this?' I think of the wars in this world. At times I have said that we are living a third world war, but in pieces. There is war in Europe, there is war in Africa, there is war in the Middle East, there is war in other countries.”

Francis demanded July 9, 2015, in response to a clergyman being kidnapped in Syria, for an immediate end to "a form of genocide" of Christians taking place in the Middle East and beyond, describing it as a "third world war."

"Today we are dismayed to see how in the Middle East and elsewhere in the world many of our brothers and sisters are persecuted, tortured and killed for their faith in Jesus," Francis said.

"In this third world war, waged piecemeal, which we are now experiencing, a form of genocide is taking place, and it must end.”

At the second World Meeting of Popular Movements that same day, Francis addressed the crowd saying: “Today we are dismayed to see how in the Middle East and elsewhere in the world many of our brothers and sisters are persecuted, tortured and killed for their faith in Jesus. This too needs to be denounced: in this third world war, waged piecemeal, which we are now experiencing, a form of genocide -- I insist on the word -- is taking place, and it must end.”

In August 2015, he spoke to members of the Eucharistic Youth Movement, in particular about global conflicts that led to the Rohingya, a Burmese minority of 1.3 million people, to migrate by the tens of thousands to other countries across Southeast Asia.

“They were chased from one country and from another and from another,” Francis said of the situation. “When they arrived at a port or a beach, they gave them a bit of water or a bit to eat and were there chased out to the sea.”

The pope ended the audience with a sense of encouragement in what he has called a violent era, of a “third world war” fought “piecemeal.”

In response to the Nov. 14, 2015, series of attacks in Paris by the Islamic State group that left more than 120 people dead, Francis said, “This is not human,” in a phone call to an Italian Catholic television station.

Asked by the interviewer if it was part of a "Third World War in pieces," he responded: "This is a piece. There is no justification for such things."

In off-the-cuff comments on Earth Day 2016, Francis said “Where there is not social friendship, there is hatred, war. We are living a 'third world war in pieces,' everywhere. Look at the map of the world and you will see this.”