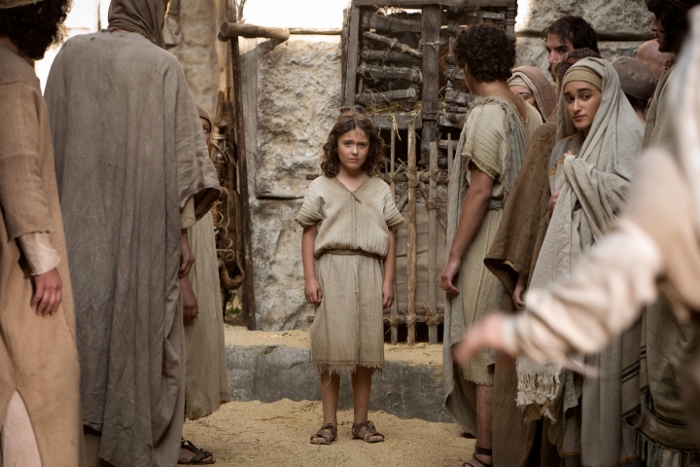 Caption: Adam Greaves-Neal stars in a scene from the movie "The Young Messiah." (CNS photo/Focus)

In this cinematic imagining of Jesus (Adam Greaves-Neal) as a child of about seven or eight living with his parents in the small Jewish community of Alexandria, Egypt, we meet a young boy who is bullied and willing to stand up for another child, a girl, being picked on as well. With some devilish mischief thrown in the brawl, a child dies and Jesus is accused. When Jesus sneaks to the boy's bedside he lays his hands on his face and prays, the boy awakens -- or as some believe, comes back to life. This frightens the small Jewish community that turns against the boy and his family and tells them to leave Alexandria.

Joseph (Vincent Walsh) learns in a dream that Herod the Great has died. Soon he and Mary (Sara Lazzaro), Jesus' mother, decide with their relatives to return to Nazareth. But what was going on in Jesus' head as he observes and experiences life around him and then the journey to the land of his birth still under the occupation and oppression by the Romans? He asks questions that his parents don't feel ready to answer. They tell him what they think he can understand but his questions persist.

The group is warned to bypass Jerusalem and takes a boat to the coast, perhaps landing at the port Caesarea. A kind man gives a small hand-carved camel to Jesus as a gift that becomes a symbol of faith and trust. As the small party makes its way toward Nazareth another storyline emerges. A seasoned Roman soldier, Severus (Sean Bean), who had been part of the slaughter of the innocents in Bethlehem, is commanded by Herod's son to continue to search for the child and kill him. He seems caught between doing his duty as a Roman soldier and wondering just who this child is. When he encounters the child on the road he doesn't realize who he is. But with time comes a dawning realization.

As the family walks along they see a man attacking a woman dressed in red named Seleni (Isabelle Adriani). She is a slave and the man has killed her master and his wife. She is ashamed of what happened to her but the group welcomes her to travel to Nazareth with them.

Finally, the group arrives at Nazareth and settles in. Most of the people live in hiding because the Romans and Herod's soldiers are hunting for and crucifying insurrectionists. Joseph and Mary know that Herod's son is looking for Jesus, just as his father did. Then Jesus says he wants to go to the Temple in Jerusalem for Passover and takes off on his own when his parents refuse to take him.

From here on out the tension builds until Jesus reaches the Temple and encounters a blind man and Severus, with the demon lingering and interfering because even he is not sure who this child is.

The most beautiful part of the movie for me is when Jesus asks Mary to tell him the story of his birth. They sit under some trees and she tells Jesus, "I am only going to tell you this once. One morning my room was filled with light, and it spoke to me ... I was 14 years old when you were born. ..." There are two significant theological themes in the film that stood out for me. One is the knowledge of Jesus: What did he know about his identity and when did he know it" Mary and Joseph discuss the dilemma. Mary asks Joseph, "What do we tell our little boy?" and Joseph responds with another question, "How do we explain God to his own son?"

The second theme is about Mary. She is beautiful and Sara Lazzaro plays her role, as she told me in a red carpet interview, as a woman first of all, then imaging what is was like as a mother with a gifted child. "It was daunting to play this iconic role," she said. The Marian theme is not only character-driven, but there is something subtle and strong about the costuming, even if more in keeping with the colors of Renaissance art (as costume director Stefano De Nardis told me on a set visit to CineCitta' in 2014) than that of poor Jews of the times. When the birth of Jesus is shown Mary wears the expected but inaccurate blue veil. Then she is dressed in earth colors until Nazareth when her undergarment, like a blouse, is red. Finally, she is dressed completely in red, though not as boldly as the sinned-against slave girl Seleni. What this said to me is that Mary restored dignity to womanhood not only by her "yes" to God but in solidarity with her sisters then and now who have been and continue to be beaten and victimized.

The Marian ethos of the film is quite wonderful really. Joseph is portrayed very well, too. An argument for a theology of parenting could be made, I think, but a closer study of the film.

"The Young Messiah" is based on the original 2005 novel Christ the Lord: Out of Egypt by Anne Rice, famous for her vampire fiction, written during a rather brief time when she returned to the church. The screenplay is by Betsy Giffen Nowrasteh and her husband Cyrus Nowrasteh, who also directed. Cyrus Nowrasteh told the audience at the screening that Anne Rice is very pleased with the film even though some changes were made to reflect authentic points of theology and consistency with Scripture.

I was able to visit the set with other Christian journalists at CineCitta' in October 2014 in Rome where the scenes in Alexandria and Jerusalem were filmed. In fact, the scenes at the Temple were in full swing. We even had the opportunity to meet Sean Bean as well as speak the writers, producers, and some of the other actors who were gracious with their time and committed to their characters and the story.

Visiting the costume department was a revelation. "The Young Messiah" was no small production. Costuming has to tick off so many boxes, as does set design, so that the story will be credible and natural to the audience. But as with almost every other Gospel-based film in the history of cinema, most of the ordinary Jewish men and boys do not look Jewish. They do not wear the kippah or skullcap as required by Jewish law to show reverence to God. Some do, but not those who will figure into the Christian story later, especially Jesus. Some of the Jewish men wear the prayer shawl when going for prayer, but it seems it's mostly the Pharisees and rabbis who dress according to the Jewish clothing code.

I have often wondered why so much attention is given to the detail of the Roman soldiers, and even to the Pharisees or Sadducees, but not to the authentic attire of ordinary Jewish males, certainly Jesus and his disciples. They visit the Temple in Jerusalem but never a local synagogue, a place for communal worship, which are known to have existed two-three hundred years before Christ. This is reinforced in Luke 4:16, and "he entered the synagogue, as was his custom ... and stood to read." It's almost as if these boys and men were already Christian, or in some kind of actual transition. But they were not; they were observant Jews, men of their place, faith, and times.

The scenes meant to represent Palestine were shot around Matera, Italy, the same place where Pier Paolo Pasolini shot his "Gospel According to St. Matthew" (1964), Mel Gibson's "The Passion of the Christ" (2004) and Catherine Hardwicke's "The Nativity Story" (2006). Several of the actors told us journalists that it was their favorite place during the entire filming process.

Someday I'd like to see an authentic movie about the lives of the Jewish Jesus, Mary and Joseph, perhaps with a entirely Semitic cast. Some have commented that there is not enough racial diversity in the film. Indeed, while all are dark-haired (except the devil), several characters have blue or green eyes. To their credit, the filmmakers have avoided the blond-haired blue-eyed Jesus of previous Jesus films or television miniseries. They also opted for British accents, but this is code for American audiences that the characters would otherwise be speaking a foreign language. I have to say, these aspects didn't bother me; the themes and what the story is about kept my attention.

The score is by John Debney who also scored "The Passion of the Christ." He told me he considered whether to link the two scores or not and then decided to do so. The score beautifully enhances the film.

In the meantime, "The Young Messiah" is a beautiful film to look at; the drama is lightened with moments of humor; and the story (while predictable), along with the characters, is believable. Because this is about Jesus as a child it offers themes to talk about with younger children and much for parents to discuss and reflect upon. Though there are some scenes of violence and mature themes, this is a gentle film when compared with darkness and extreme violence depicted in "The Passion of the Christ."

At the end of the day, this is a most unique way to tell Jesus' story that I think it is consistent with Christology and remarkable because it prefigures Jesus words and actions that are later recounted in the Gospels. There are some moments of genuine inspiration and the striking cinematography of place blends all the elements of the film together.