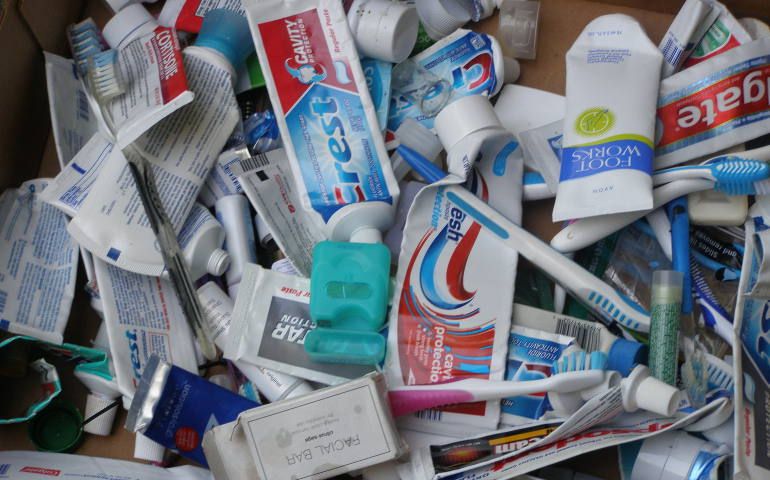 Empty toothpaste and floss containers, old toothbrushes and discarded cream tubes are among the many items that regularly fill the 96-gallon bin at St. Anthony Parish in Cincinnati through its Beyond the Bin recycling program. (Photos courtesy of Deanna Spatz)

For 22 months now, people have been bringing their trash to church at St. Anthony Parish in Cincinnati’s Madisonville neighborhood. The at-first odd practice isn’t due to overflow in their own bins, but rather meant as a way to give certain items a second life beyond the garbage dump.

Deanna Spatz, coordinator of Beyond the Bin, initiated the recycling program in 2013 through the parish’s four-member creation care team after discovering that more than 50 percent of all trash can have useful life beyond the landfill. As far as she knows, St. Anthony is the only area parish with such a ministry.

Spatz, a 74-year-old grandmother and retired clinical social worker, became a dedicated recycling disciple in 2012 after attending a four-week workshop sponsored by the Hamilton County Department of Environmental Services. There, she learned that joining birds, animals, and clean air and water on the endangered list was landfill space -- both locally and nationally.

The Cincinnati area might have only 10 or 11 years’ worth of landfill space left, according to a representative of Rumpke Waste & Recylcling, a multi-state trash collection agency based outside Cincinnati, at the workshop. At least half of the stuff arriving in the area’s brimming garbage trucks each week could instead be recycled and reused: nearly 42 percent consists of paper, 15 percent plastics and another 15 percent compostable food waste.

Additionally, a 2008 report from the Institute for Local Self-Reliance found that reducing waste could reduce greenhouse gas emissions in sectors that together account for more than a third (36.7 percent) of U.S. emissions.

Instead of finding new terrain to dump stuff, Spatz learned it made more sense for municipalities to opt for a zero waste approach, one touted by the Institute for Local Self-Reliance report as “one of the fastest, cheapest, and most effective strategies we can use to protect the climate and environment.”

The Rumpke workshop provided a lengthy list of local and national places glad to take people’s throwaways: locally, Matthew 25 Ministries took items like prescription and vitamin bottles, pull tabs could go to the Ronald McDonald House, and corks to Whole Foods. At the national level, organizations like TerraCycle, Inc., make new recyclable products from things that don’t start out that way, providing free collection programs for such hard-to-recycle materials.

Spatz shared this information with the small St. Anthony community. Though its two weekend liturgies draw at most 200 people, the parish has a long history of addressing social justice issues, she said, including the environment.

With the parish’s endorsement, the creation care committee launched the Beyond the Bin program by installing a 96-gallon bin in an alcove near the rectory.

Every three weeks, the retired grandmother sorts and distributes the contributions on her own.

Well before Beyond the Bin began, Spatz was already imbued with a love for creation.

Her journey into ecological consciousness began in the 1940s while growing up in southern Indiana. In those days, it was simply called being careful and practicing frugality in order to save water -- a resource particularly precious to her family.

“We lived in the country. Our water came from a cistern,” she recalled. “If we used too much and it ran out, we had to buy more from the city.”

“I was always conscious about water,” she said, adding that shifting into earth care has simply been a “broadening of that consciousness.”

In addition to Beyond the Bin, Spatz is also a member of the archdiocese’s Parish Collaborative Committee, which has focused upon the effects of climate change.

For years she has immersed herself in the writings of Jesuit paleontologist Fr. Teilhard de Chardin, papal pronouncements on the environment, and information published by the U.S. Conference of Catholic Bishops.

But it has been a quote from Teilhard that has served as the mantra that travels with Spatz on her spiritual path:

“Nothing here below is profane for those who know how to see. On the contrary everything is sacred.”