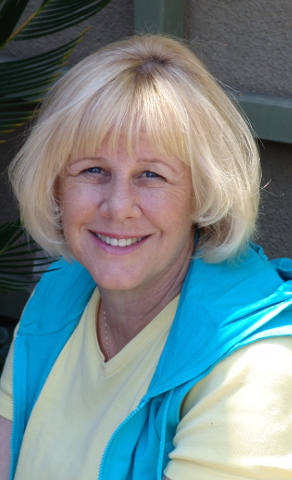 Maureen Mancuso is pastor of the St. Hildegard Catholic Community in Berkeley, Calif.

The atmosphere of Berkeley, Calif., offers a definite advantage for its newest neighbor on the block.

Known for activism on a number of fronts -- the environment, feminism, interspirituality, social justice -- the northern California college town, recently named by Business Insider the most liberal city in California, fits the fledging St. Hildegard Catholic Community in every sense of the word “progressive.”

As Earth Day activities wound down April 25 on the University of California-Berkeley campus a few blocks away, 30 worshippers from the St. Hildegard community participated in a green-inspired liturgy at the Berkeley Unitarian Universalist Fellowship, attuned to the creative spirit of their 12th-century namesake. An ecologist, gardener, healer, writer, speaker and composer, Hildegard, in large part to her fearlessness, once earned an interdict from church authorities.

The celebration offered something for everybody, beginning with two traditional Scripture readings, which were interspersed by a Mary Oliver poem titled “Logos.” The liturgy then moved into a dialogue homily around the Good Shepherd theme, reflecting upon “Who shepherds a shepherd?”

The creed, authored by Benedictine Sr. Joan Chittister, celebrated God as “a divinity who infuses life with the sacred, and who is found in all the wisdoms of the world.”

The liturgy featured a concelebrated, inclusive-language Eucharist recognizing the dynamic interrelationship between all of God’s creation. During the closing hymn, people broke into a spontaneous circle dance around the room, “giving you a sense of the spirit of the event,” according to first-time visitor Irene Woodward, a retired philosophy professor.

“It was communal, inclusive and collaborative,” she said.

“I came away feeling I had participated in a community rather than being in a scripted institutional Mass,” said Marian Hopping.

Representing perhaps its most progressive element, the pastor of the St. Hildegard Catholic Community is a woman priest.

The group, whose members are not recognized by the Roman Catholic church, originated in Germany in 2002 with the ordination of seven women on a cruise ship by Archbishop Romulo Antonio Braschi of Argentina. To date, there are more than 145 Roman Catholic women priests and 12 bishops worldwide. Mancuso is the first woman to be ordained in northern California. There are currently eight women priests church communities throughout the Golden State.

Mancuso told NCR when she began her studies in the 1990s at Jesuit School of Theology of Santa Clara University, where she earned her master of divinity degree, she had hoped the church would eventually “realize and trust that it possesses within itself the authority to ordain women.”

But in 1995 when Cardinal Joseph Ratzinger, then head of the Congregation for the Doctrine of the Faith and later Pope Benedict XVI, wrote a letter affirming Pope John Paul II’s Ordinatio Sacerdotalis, which denied the possibility of women’s ordination, Mancuso saw him as snapping a padlock to the already firmly closed door.

“If one thinks why padlocks are added to closed doors it is only because of the fear that someone unwanted will enter,” she said in an email.

“Why a human fashioned in the image of God should be unwanted by God?” she asked.

The organizing members of St. Hildegard chose the Rhineland mystic as their mentor because she is the perfect patron saint to inspire a “severely needed ecological awakening for our modern society,” Mancuso said.

The set point for collaborative decision making in its prayer and practice is the understanding that all of creation is interrelated, she said. “It has to be. Humanity must understand, as Thomas Berry says in The Dream for the Earth, ‘We need to present ourselves to planet as the planet presents itself to us, in an evocatory rather than domineering relationship.’”

St. Hildegard’s pastor has given voice to her passion in a new book of poetry entitled Notice: Poetry of Creation in the Sacred Ordinary, which publishes later this spring. In “Cry Out,” she grieves, “Unlike the stones that hold memories of learning taught by Mother Earth; collective memories and deep wisdom of reflection consciousness seem lost: we are too busy; we no longer hold the ancestors in our veins.”

Mancuso’s own Earth advocacy is thoroughly ingrained: “I’ve always loved nature since I was a little girl.” In high school, she celebrated the first Earth Day, held in 197* by making a large sandwich board that read “Earth Day, Save Our Planet.”

“I wore it awkwardly,” she recalled.

Cumbersome and all,  the sign didn’t discourage her from walking several miles to her San Francisco school that day instead of taking public transportation.

Eventually, St. Hildegard’s vision of “earth’s lush greening” will appear in Berkeley in the form of an Earth literacy center and a community-supported garden, both still in development.

“Since Hildegard’s is so new, we need to grow our roots first,” Mancuso said. “Our vision statement includes both social and earth justice, and stands united in support of the relationship between ecology and theology.

“We will begin with the greening of our own community and reaching outwards,” she said.