Everyone is a son or daughter of God 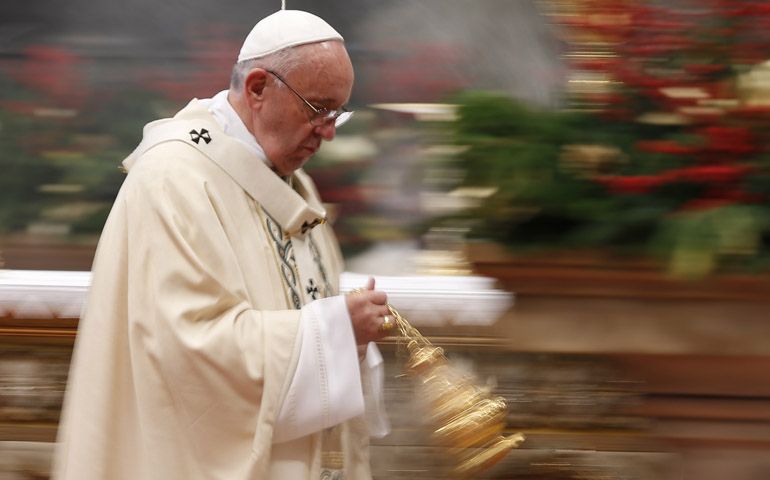 Pope Francis uses incense as he celebrates Mass marking the feast of the Epiphany in St. Peter's Basilica at the Vatican Jan. 6. (CNS/Paul Haring)

One of the rules of interpretation for Scripture readings that helps us to understand perhaps more clearly what we have heard is that you should always consider the circumstances of the community for whom the writer is directing his message. In the case of the Gospel today, it helps us if we remember that first of all, this story about the Magi or the ones we call "the three kings" appears only in Matthew's Gospel. The other three Gospels make no mention of it.

Why would Matthew be concerned to bring this story forward? It's because the people of that community were a Jewish community. This is the one community from which the four Gospels came that was a Jewish Christian community. They believed that you still had to become a Jew before you could become a Christian or a follower of Jesus. So Matthew is trying to get them to understand that, no, God came for all people, not just the Chosen people.

That, in fact, involved a huge dispute in the early church. It took quite a while for people to come to understand that the loving salvation of God is not for just a few, it's for all. If you want to read more about it you can look in the Acts of the Apostles where this dispute that went on in the early church, that went on for a number of years with some insisting that you had to become a Jew, be circumcised before you could become a Christian, it was finally settled.

But at the point that Matthew is writing, it had not been settled and the people were still trying to demand that anyone who wanted to follow Jesus had first to be a Jew. If we remember the short passage from the letter to the Ephesians, St. Paul tells us, "This mystery was not made known to past generations, but only now. The mystery is this: That now the Gentiles (the non-Jews throughout the world) are coheirs, members of the same body, partners in the promise in Christ Jesus through the Gospel."

He says, "This is the mystery that is now revealed: not just the Chosen people, but all people." Paul makes it very explicit, very clear what Matthew is trying to say to the people of the Jewish Christian community, "God came for all, not for a few." In fact, when you listen to our first lesson carefully today—this is of course from the Old Testament in the Scriptures that the Jewish people followed from the book of the prophet Isaiah.

In that passage, we hear how people from every nation (it's an image of what is to happen) come to worship the one God. Even back in the time of Isaiah, 500 years or 600 years before Matthew wrote, there were hints that God was coming for all, not for a few. This is a message that's very important for us to hear today because we sometimes seem to think that God has come only to save us, those who are explicitly Christian. But God's love reaches out to all.

Do you remember (it was in the news, but perhaps you missed it) about a year and a half ago, Pope Francis was preaching at one of the weekday Masses that he says every day in the chapel of the house where he lives and people come from the communities that live there and attend his Mass and he was talking about who is saved? Who is in heaven? He said, "Even atheists are in heaven." Now you can imagine the people sitting there in the pews, "What? Atheists in heaven?"

He said, "Yes, even atheists are in heaven because God loves all. Jesus came to bring all the people of all times and all nations into the one human family into which Jesus himself has come." Once Jesus entered into our human history and became part of our human family, every member of that family is blessed by the presence of Jesus, so even atheists. Just within the last month, Pope Francis gives us another good example of how we have to understand that God came for all, not for a few.

We're all aware, I'm sure, of antagonism today between Muslims and Christians. It goes both ways. There are those Muslims that are murdering Christians simply because they're Christians. But also, there's a lot of hate towards Muslims in our world. What does Pope Francis do? Last month he was in the country of Central African Republic in the heart of Africa, a very small landlocked country. It's a place where there's been terrible violence.

In fact, many people told the Pope, "Don't go. You could well be murdered if you go there." But Francis went anyway. Here's the description of part of what he did in this tiny country that's been at war—revolutionary and civil disruptions, "Most significant of all, Francis went to the central mosque in Bangui in the heart of the city's Muslim enclave, which has been a flashpoint for violence in recent years where Christians and Muslims killed one another.

Francis prayed in the mosque, affirmed that, 'Christians and Muslims are brothers and sisters, sons and daughters of the same God.' Then riding with an imam (a religious leader) on the Popemobil, he visited Muslims from a refugee camp in a nearby school sports field. It was the sort of healing action that helped create the climate for peace." What Francis does is he goes right into the midst of a very volatile situation, a situation filled with hate and violence, and he brings peace.

In fact, since he's been there, there's been not complete peace, but at least movement towards a resolution of the fighting. He dared to go among the Muslims, whom Christians were killing, to be with them and to say by his actions, "You are sons and daughters of God, just as we are." When all of us begin to get that understanding, don't you think we'll begin to be on a path to peace in our world?"

If we don't get that understanding, won't we continue simply to have one violent action succeed another? We must heed the message of Francis, Francis who is heeding the message of Jesus. He came into this world for all people. Every person in the human family is a son or daughter of God. That's a message of today's peace. The Magi come, they worship Jesus, they accept Jesus, and they go back to their own lands and live their life like they did before.

In Matthew's community, he preaches the truth: Jesus came for the Gentiles as well as the Jews. Paul, who is the apostle of the Gentiles, also proclaims that Jesus came for the Jews. Every member of the human family, again, is a son or daughter of God. That's the teaching of today's readings. Isn't it really extremely important that we absorb that teaching and begin to live according to it?

That is the way that the coming of Jesus bringing God's saving love into our world will begin to spread the peace of Jesus throughout every part of our world. It will only happen when each one of us understands and lives the message that is proclaimed to us today in this feast of the manifestation or Epiphany of Jesus to all the peoples of the earth. Absorb that lesson, live it, and we can hope for peace.

[Homily given at St. Anne Parish, Frankfort, Mich. The transcripts of Bishop Gumbleton's homilies are posted weekly to NCRonline.org. Sign up here to receive an email alert when the latest homily is posted.]

Parish | Everyone is a son or daughter of God

Six things to expect in the pope's address to Congress

Can Pope Francis help 'reset' frayed ties between Obama and the Catholic bishops?