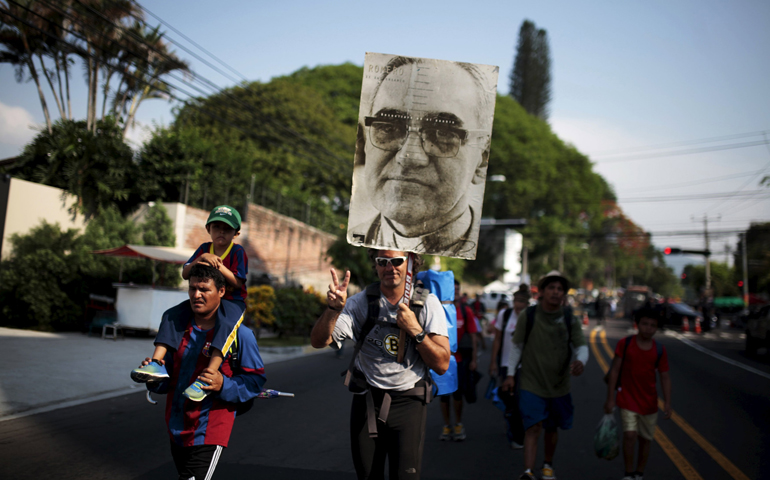 A pilgrim carries a poster of Archbishop Oscar Romero at El Salvador del Mundo Square on May 22, the day before his beatification ceremony in San Salvador. (CNS/Reuters/Jose Cabezas)

A couple of very significant coincidences happened today. We are celebrating the feast of Pentecost. But also, tomorrow precisely, May 24, is two months in 1980 after Archbishop Oscar Romero was shot to death in the tiny chapel about the size of this chapel. Today, as I mentioned before we started, he is being beatified in El Salvador. A quarter of a million people are there to celebrate this extraordinary and marvelous event.

So it's appropriate that as we listen to the Scriptures today and celebrate this feast of Pentecost, we do it with the background of the life and martyrdom of Oscar Romero, truly a saint for our time. As we heard in the Gospel lesson, Jesus actually gave the gift of the Spirit to the disciples on Easter Sunday night, not 50 days later on this feast of Pentecost. But St. Luke, for the early church, was trying to bring out the deepest meaning of this giving of the Spirit, so he devised what we heard in the first lesson today, a story about the feast of Pentecost and what it means for this new community of disciples of Jesus still functioning or practicing as Jews.

Luke describes, first of all, that great wind that shook the walls of the house where they were staying. It reminded these followers of Jesus of the wind at the beginning of creation -- the same word in Hebrew for wind and for spirit. The spirit came over the chaos. The wind came over the chaos and formed it into the universe that we begin to know at that point. That same wind now comes upon the disciples to make them a new creation.

The fire and the great Jewish feast commemorating what happened at Sinai, when the Jewish people first entered into a covenant with God under the leadership of Moses -- "I will be your God; you will be my people" -- but during that event, when Moses experienced God in a very special way, tongues of fire appeared, according to the tradition. So now, these tongues of fire come on this new community of disciples of Jesus.

A new covenant is formed, a covenant that now is made permanent through the life and death and resurrection of Jesus. In the Hebrew Scriptures also, not part ordinarily of the feast of Pentecost, is the story of the Tower of Babel. That's the story, as you remember, from the book of Genesis where disputes arose among the people, and they were building this huge tower out of pride. They began to fight with one another.

God made it impossible for them to work, according to the story, because their language became confused into many languages. Now, on this feast of Pentecost, Luke tells us, "Everyone can understand in his or her own language. The Spirit brings the people together once more and makes us one." It's a tremendous feast, and Luke has a marvelous way of helping us to probe the depths of the feast.

That council and that sentence identifies the needs of the poor with the work of the church. The poor are the church. Archbishop Romero, long before Pope Francis -- who now talks about wanting a church which is poor and for the poor, and always going out to the peripheries where the poor are -- Archbishop Romero was doing that back in the late 1970s, for three years only, but he had a tremendous impact.

From 1977 to 1980, he made the poor the focus of the work of the church of El Salvador. In fact, on one occasion when a priest had been murdered, Archbishop Romero in his homily spoke about the fact that we are a church of the poor. Saying the priest is the symbol of the official church, he said, "What happens to the poor in our country in this terrible period? The poor are disappeared, then tortured, then murdered and their bodies left in the ditch."

Archbishop Romero in the midst of the sorrow over the loss of the priest could rejoice because we are a church of the poor. That was the goal of the Vatican council -- this new Pentecost, to try to make our church what Pope Francis now says so explicitly, "Make our church a church that is poor and is for the poor, brings justice to the poor." That was the work of Archbishop Romero.

Perhaps most of all, what I think we can draw from this feast of Pentecost in light of Archbishop Romero and his life and death are the words of the Gospel on that Easter Sunday night, when Jesus went into the room where the people were gathered. Out of fear, they were hiding and probably afraid even to confront Jesus because they had abandoned him. When he comes into their midst, the first thing he says to them is, "Peace be with you."

That's what Jesus gave to the disciples, and that's what he asked them to give, to take out into the world to transform the world into the reign of God through forgiveness, peace and love. Perhaps you've heard before, but these words of Archbishop Romero are so powerful and so significant, it's important to hear them again today. Two weeks before he was shot to death, he was interviewed by a reporter working for a newspaper in Mexico.

The reporter asked him, "Aren't you afraid? Why don't you leave the country? Your name is on the death list. They're going to kill you." It was true and, of course, the archbishop knew it. But he said to the reporter, "Yes, I've often been threatened with death, but I don't believe in death without resurrection. Even if they kill me, I will rise again in the Salvadoran people." I'm sure that's the experience of the people in El Salvador today.

Then he told the reporters, "In fact, if indeed they kill me, you may tell them even now, I bless and forgive those who do it." Here is a bishop who follows the way of Jesus, who is teaching the church of El Salvador to follow the way of Jesus, the way of peace, forgiveness and love. As we celebrate this feast of Pentecost and celebrate Oscar Romero alive in our midst, I hope we can listen deeply to the words of Scripture, words that call us as Jesus told those first disciples on Easter Sunday night: "As God has sent me, I send you."

[Homily given at St. Anne Church in Detroit. The transcripts of Bishop Gumbleton's homilies are posted weekly to NCRonline.org. Sign up here to receive an email alert when the latest homily is posted.]