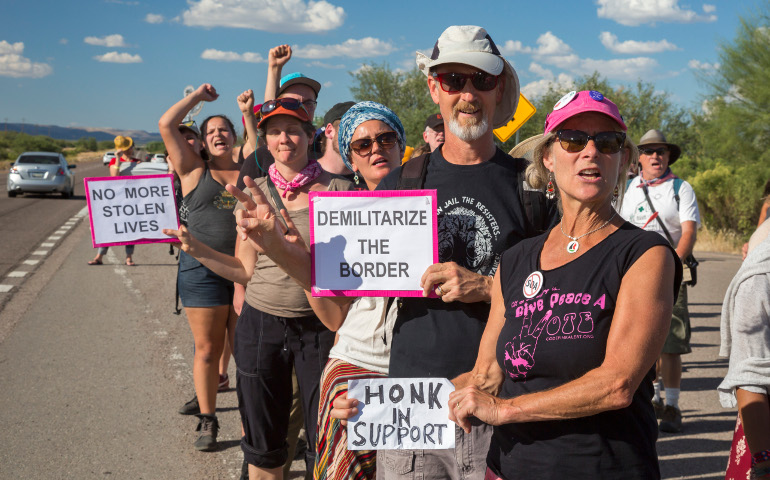 The scripture lessons today seem very grim, not very easy to listen to perhaps. That was probably true of the early disciples because I think they did kind of a selective listening, as we do sometimes. We’ll hear what we choose to hear, and not hear something else. I think those first disciples heard both in that prophecy of Malachi where the prophet spoke about, “That final day when flaming as a furnace, all the proud and evildoers will be burned like straw in the fire. That’s a hard judgment.”

But then Malachi says, on the other hand, “The Sun of justice, the Sun that destroys through its fire and heat will shine upon you who respect my name and bring health in its praise.” There’s the bad news and the good news. I think the early Christians chose to hear the good news because as you notice in the second lesson today, in the letter to the Thessalonians, Paul is talking about the final judgment, too.

The early Christians had heard this message, but they also had heard the end of the Gospel that the Son of Man will come again in glory and bring fullness of life for everybody. So, that’s what they chose to hear and that’s why Paul had to rebuke them. They thought Jesus was coming back almost immediately, so they stopped working; they stopped living their everyday, normal lives. Jesus is about to come. They heard the good part, but they had not really listened to the judgment part — what happened because we failed to follow the way of Jesus.

In the very beginning when the church first began, after Jesus had been crucified and raised from the dead, the first Christian community experienced a time of great peace. You may remember in the Acts of the Apostles, they’re described as coming together every day to the temple, praying, singing hymns and psalms, and living a life of joyful community where everyone had whatever he or she needed. No one was in need because they shared their gifts.

It was a time for them of peace and tranquility. But it didn’t last very long because as Jesus speaks about in Luke’s Gospel about the temple being destroyed, not a stone left upon a stone. By the time those words were written down in the 80s, it had already happened. The Romans had invaded Jerusalem and destroyed the temple and the Jews were dispersed. Almost immediately that time of peace and what they thought of as fulfillment of God’s will as a result of Jesus coming into our midst began to be a time of trouble, a time of suffering and pain, death and destruction. It’s gone on, of course, all these centuries.

If we look back over the last 20 centuries since Jesus came and lived in our midst, became the way, the truth, and the life for us, we haven’t really followed his way. So, we have had what Luke describes: wars and turmoil in our world. We have experienced terrible things in nature: earthquakes and destructions of different parts of the earth. Should we be like those first disciples and pretend that we don’t have to worry about all that because Jesus is about to return? No, we don’t know. Perhaps it seems like these lessons are difficult for these young people preparing to begin their confirmation preparation, but they’re not.

They are appropriate because what we have to remember is that we were left with great hope. St. Paul in writing to the church at Rome says, “I consider that the suffering of our present life cannot be compared with the glory that will be revealed and given to us. All of creation is eagerly expecting the birth and glory of the children of God. We know that the whole creation groans and suffers from the pangs of birth, not creation alone, but even ourselves. Although the spirit was given to us as a foretaste of what we are to receive, we groan in our innermost being eagerly awaiting the day when God will give us full rights and rescue our bodies as well, that is, bring us in the fullness of God’s glory.”

The hope is there, present for every one of us. What do we do then in the time between? Jesus has come, died, and risen from the dead; he proclaims the good news about his kingdom being ready to break forth upon the world, but he also gathered disciples and their task was to continue his work, which he proclaimed was to transform our world into the reign of God. When he first began his public life, he said, “The Spirit of God is upon me. God sent me to proclaim good news to the poor, heal the brokenhearted, give the blind new sight, set the downtrodden free, proclaim God’s year of Jubilee — a time of peace, a time of fullness of life for every person.”

Jesus, when he read those words said, “This day this passage is fulfilled even as you listen.” That was his task — to transform our world, and that work goes on, only we are the ones now called to proclaim good news to the poor, give the blind new sight, set the downtrodden free, heal the brokenhearted — that’s our task. Pope Francis, not too long ago, was speaking to young people as he might be speaking to the young people here today, and he said, “The program for your life is very clear: If you’re going to follow Jesus, look at the 25th chapter of Matthew’s gospel, ‘When I was hungry you gave me to eat. When I was thirsty you gave me to drink. When I was naked you clothed me. When I was in prison or sick you visited me.’ ”

You remember in that gospel the people said, “When did we do that?” Jesus said, “Whenever you did it to one of the least of my brothers and sisters, you did it to me.” That’s our work, isn’t it? To carry on what Jesus says, the program that will welcome poor people into our midst, share our wealth with those who are without the means to have a decent human life, to welcome immigrants into our country.

The tens of millions of people who are fleeing their land now because of war — we are to welcome them. When I was a stranger you took me in. That’s the work we have to do — the program of Jesus. As we begin to do that with greater intensity, greater genuiness, when we really begin to live according to the way of Jesus, then we will begin to see the reign of God break forth in our world, not just at the end of time, but now. That’s what Paul was talking about, “All of creation is coming to birth,” if we can help to make it happen by following Jesus.

As we reflect on the scriptures today, I hope we will hear the whole message. Yes, there will be a time of judgment. Yes, there will be a time when what Jesus spoke about will happen. But there will also be that time if we do the work of Jesus, when the fullness of life will begin to happen for every person on this planet. It’s our task to make the reign of God come into its fullness, to transform our world into as close an image of that reign of God as possible. I hope that as our young people today begin this first step in receiving the Sacrament of Confirmation, all of us will renew our own determination to follow Jesus, to do his work, transform our world into the reign of God.