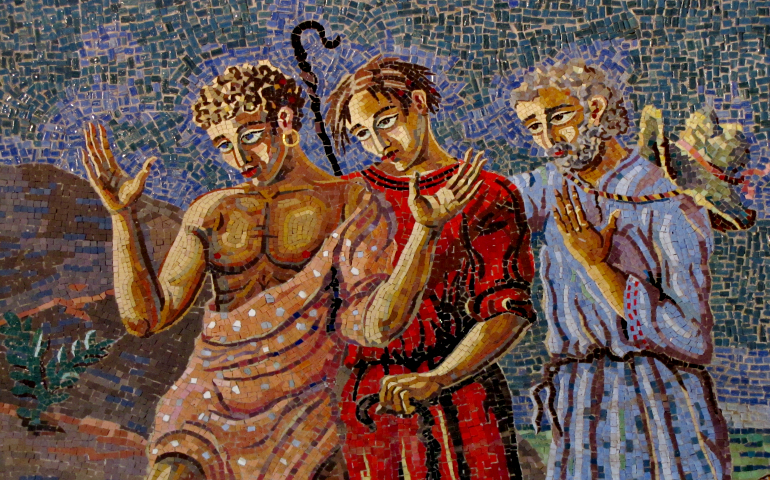 The Adoration of the Shepherds, depicted in mosaic in the Benedictine Abbey of Mont Sainte-Odile, France (Wikimedia Commons/Ralph Hammann)

Probably sometimes you have noticed that Pope Francis talks, in fact quite frequently, about the need for the church, that is for all of us, to go to what Francis calls the peripheries, the margins. Take the church (we are the church) and be there among the people who are marginalized.

Sometimes you might wonder, where did this come from? Why is Francis putting so much emphasis on our going out to the periphery?

If we listen to tonight's Gospel, we find that's exactly what God does, working through the angels at the birth of Jesus. Those shepherds were what we would call people on the margin; they were on the periphery.

Shepherds were almost like outcasts in the society where Jesus was born. They lived a rough and difficult life, spending their time in the countryside, sleeping outdoors, but protecting their sheep. They were not well-educated; they were not wealthy and important people of any kind.

But those were the ones who received the first message that the Son of God had entered into human history, had become part of our human family. They were the first ones to receive that news. God sent the message about Jesus first of all to people on the margins, to the poor, the rejected.

So Francis is merely following up on the way God acted at the birth of Jesus. For example, just last week when he celebrated his birthday, what did he do? He didn't have a big party in a big wealthy hotel with lots of wealthy people around.

He sent out and found 12 homeless people to bring to the small hotel where he lives and he shared breakfast with them, meeting each one, introducing himself, finding out who the person was, reaching out to those that are on the edge, are marginalized — the poor who are so numerous in our world, even in our country, even in our city — everywhere we see them. Francis is simply following the direction that God gave when Jesus was born.

That lesson is reinforced not only because the word was sent out to those shepherds, those on the periphery, but also because Jesus became part of them. In Paul's letter to the church of Philippi, he describes this in extraordinary terms. He talks about Jesus, the Son of God, who, though he was divine, did not think it necessary to cling to his divinity, but emptied himself and became one of us, and became the poorest of the poor, gave himself over to death, even the terrible death of the cross.

The Son of God entered into human history as helpless, homeless, poor — poorest of the poor. We hear in the Gospel that the angels told the shepherds, "You'll find Jesus wrapped in swaddling clothes lying in a manger," and we make it look something like our crib scene over there.

But do you know what it really was? It was a cave, and in the front of that cave a small shelter was built so homeless people could stay in that shelter, but it was crowded. In the back of the shelter, in the cave, was where their animals stayed. So Mary and Joseph, when Mary was ready to give birth, went into the cave part among the animals.

The Son of God was born with nothing, totally poor. That's almost impossible to believe that God would enter into our history in this way. But God, in Jesus, wanted to identify with those who are the poorest in our society so he could lift them up, proclaim good news to the poor.

If we're going to find Jesus in our world today, we must do what Pope Francis does. We must go to the periphery. We must take time to be with the poor. That's where we'll discover Jesus most of all. Among the poor and the most desperate poor in our world today are those who are refugees.

Of course, if we read Matthew's Gospel of the Christmas account, we discover that Jesus too became a refugee. When Herod was killing all the infants in Bethlehem, Mary and Joseph fled with the child Jesus to Egypt. Again, they're homeless; they're dependent upon others. They go to a place for safety and become refugees. I'm sure we cannot but have noticed the terrible plight of refugees in our world today.

Earlier today, I happened to read a piece about refugees from Syria, the very area where Jesus was born. Refugees there today fleeing the violence, the killing — mostly women and children — have gone to Jordan. In this article, it mentions how religious women, Dominican nuns who have a hospital there, are facing their darkest hour. They desperately need our support if they are to continue their mission providing care and hope to the thousands and thousands of Syrian refugees who need their help. Many of the Syrian refugees whom the sisters care for are mothers and young children.

The horrors of the Syrian conflict and the perilous journey to safety means that mothers often face dangerous and complicated pregnancies. Hospital doctors must frequently perform caesarean sections in order to save the lives of both the mother and the baby. Syrian children are malnourished; their families forced to live in unsanitary and overcrowded conditions, frequently sick, needing treatment for asthma and bronchitis and serious infections.

It's only with the kind and generous support of others that the sisters are able to continue helping desperately needy Syrian refugees, especially the young children. But, of course, it isn't just in Jordan, a tiny poor country where those refugees are fleeing — it's to Europe, it's to the United States. Refugees flee economic disasters or war and violence. Are we ready to reach out to them, do what we can to welcome Jesus, who is that refugee?

Pope Francis has given us such a great example by what he says and by what he does, how he goes to the periphery to find Jesus — Jesus present in the poor, the desperately needy, those suffering from war and persecution. If we are to celebrate Christmas truly and really welcome Jesus into our midst at this moment in our history, we too must find the way to go to the peripheries to find Jesus in the poor, the homeless, the refugees, the forsaken.

When we do that, then we truly can celebrate with great joy because the promise that the angels sang in their song will begin to happen. God's peace will come upon the earth and bring that peace to all people of goodwill.

[Homily for Midnight Mass given at St. Albertus in Detroit Dec. 25, 2016. The transcripts of Bishop Thomas Gumbleton's homilies are posted weekly to NCRonline.org. Sign up here to receive an email alert when the latest homily is posted.]