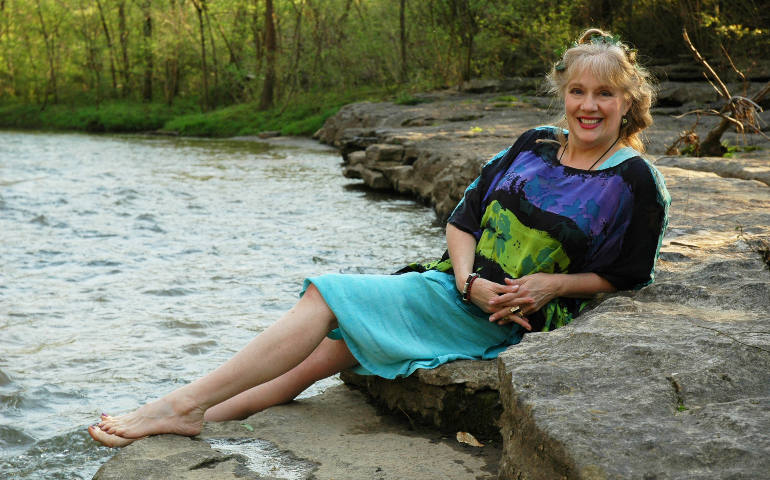 "Songs can be powerful tools to nurture and encourage both action and a depth of understanding about important ideas," said Joyce Johnson Rouse, aka Earth Mama. (Photo courtesy EarthMama.org)

Science reasons that composting your potato peelings, coffee grounds and grass clippings will, over time, lead to new earth for the growth of new flowers and vegetables. If that fact doesn’t serve as enough of a motivator to engage in earth-renewing behavior, Earth Mama advises a song might help imprint it on your heart.

“Yesterday’s salad. This morning’s oatmeal. A rotten moldy peach. Might not seem so great to you, but it could be some organism’s feast,” sings the eco-activist and educator in her song “Let it Rot.”

Underneath her maternal pseudonym, Joyce Johnson Rouse has brought her message of earth literacy to schoolchildren, adults, and social justice, business and religious groups for the past 20 years.

Singing, dancing and just plain having fun -- her props for concertgoers include an outrageously loud orange-, yellow- and green-colored feather boa -- are not only entertaining elements of her show, but also become an effective way to convey concepts like composting and other green lifestyle choices, Rouse said in a recent phone interview.

We are currently overwhelmed from technical knowledge about Earth’s plight but it doesn’t necessarily spur us to action, she noted. Music, however, takes us beyond intellect to the levels of spirit, soul and heart.

In an interview on her website, Rouse explains, “Songs are melodies with a message attached – and they have a way of getting inside of you and sticking.”

Her slogan, “helping heal the planet one song at a time,” reiterates that belief.

Said Rouse in the interview, “Songs can be powerful tools to nurture and encourage both action and a depth of understanding about important ideas. Every great social movement has marched to the strains of its own music.”

She added that singing can connect people with one another but also “with something deeper inside ourselves.

“That’s why almost every church, faith community, and religion makes use of singing. Pete Seeger says that we strengthen the bonds of community when we sing together,” she said.

Rouse, who lives with her husband in a small Virginia town near the Blue Ridge Mountains, has composed ten albums, with many of her tunes accessible on the Earth Mama website. She has drawn inspiration from the writings of Rachel Carson, Passionist Fr. Thomas Berry, Brian Swimme, Christian mystic Julian of Norwich, and Vandana Shiva, to name just a few authors.

In addition, Cincinnati Charity Sr. Paula Gonzalez, founder of the EarthConnection learning center, served as one of Joyce Rouse’s earliest mentors, and inspired the 1995 song “The Same Air.”

At a workshop where Gonzalez explained that humans have breathed the same air for eons, Rouse became both astonished and humbled by the concept. A song emerged, telling that Joan of Arc, Isaac Newton, Daniel Boone, Harriet Tubman, Cleopatra, George Washington Carver and Moses all inhaled the identical oxygen.

“So let’s take care of the very same air,” she sings in the refrain, often having audience members don a battle helmet and sword, like Joan of Arc, during live performances.

Released in 2013, Rouse’s latest album “A Sense of Place” brings both seriousness and lightheartedness to listeners. “Heaven Down Below (Whitetop Mountain)” is a poignant heartbreaker, recounting how bank takeovers, irresponsible development, mining and mountaintop removal have wiped out entire towns and destroyed communities.

In the song, an Appalachian farmer loses his home on Whitetop Mountain and at one point wonders, “When will they say you can’t eat money? When will they know you can’t drink gold? There is no cure for the greedy sickness, if you can’t see heaven down below.”

Rouse’s favorite from the album, “Detour Road,” is an up-tempo “rocking chair” tune that encourages listeners to opt for love and peace instead of hate every time they come to that “wishbone in life’s highway.”

Teaching basic concepts of ecology and earth spirituality through music has been a major career turnaround from where Rouse was in 1986 -- working in Nashville creating songs for recording artists. But that job deteriorated into hollowness as she grew tired of finding new ways to write the same lyrics lamenting heartbreak.

Music had been her “first language,” from childhood, but Rouse’s soul cried out for depth and meaning. Meditation at her Quaker meeting house unearthed memories from childhood, of life in Iowa on her family farm where “I meandered by the creek and made up little poems while I brought the cows home.” The poems soon turned into tunes as Rouse had begun by age three playing songs by ear on the piano.

Earthly songwriting happened by chance. As Rouse prepared a talk on recycling for her son’s kindergarten class, a song emerged: “Less Is More.”

When she shared it with a musical co-worker, the feedback was an appreciative “keep on writing.” And she did. Soon afterward, Rouse enrolled in a masters’ program in earth literacy at St. Mary of the Woods College, in Saint Mary of the Woods, Ind.

The program was like coming home to her soul.

Once let loose, the creativity flowed like a rushing river. In 1995 her song “Standing on the Shoulders” was tapped as the theme song for the 75th anniversary of women’s suffrage in Washington, D.C.

Rouse’s music has taken her into venues across the United States, frequently into Catholic settings. In April, she spent a week as artist-in-residence at St. Edmund Catholic School, in Eunice, La. She sang with grade school and high school students in their classrooms, talked about living green and conducted a song writing workshop.

“They loved it and talked about it for weeks,” said Sr. Joel Miller, a member of the Marianites of Holy Cross.

Outside the school, Rouse held a sing-along at the local Marianites of Holy Cross nursing home and staged a city concert, with students singing and donning costumes for several songs.

At one point, Rouse “even went crawfishing while she was here,” Miller said.

No doubt at any ensuing crawfish broils, Earth Mama sang a song encouraging all to compost the discarded shells.