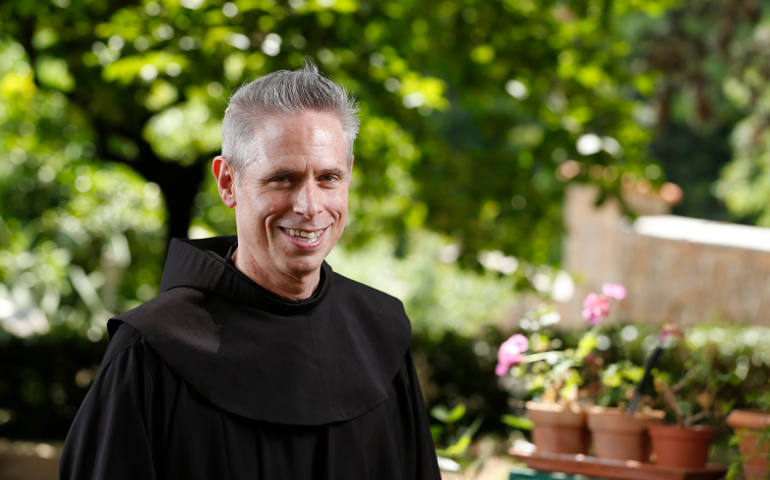 "Laudato Si,' " the title Pope Francis chose for his encyclical on the environment, comes from a hymn of praise by St. Francis of Assisi that emphasizes being in harmony with God, with other creatures and with other human beings, said the head of the Franciscan order.

Sitting under towering trees, surrounded by potted flowers and herbs in the garden of the Franciscan headquarters in Rome, U.S. Fr. Michael Perry, minister general of the Order of Friars Minor, sang the medieval Italian words "laudato si'" (praised be you) and recited the English translation of St. Francis' "Canticle of the Creatures."

The hymn praises God and the reflection of God's glory in "Brother Sun" and "Sister Moon," "Brother Fire" and "Sister Water," and "our sister, Mother Earth, who sustains and governs us, and who produces various fruits with colored flowers and herbs."

The canticle is incomplete, though, without St. Francis' praise of human beings "who give pardon," bear infirmity and live in peace, Perry told Catholic News Service Friday. Also essential is St. Francis' embrace of "Sister Bodily Death" as the portal to eternal life.

As airplanes flew overhead, birds chirped, butterflies flitted around the garden and the occasional ambulance siren sounded, the Franciscan minister general said St. Francis of Assisi, over the course of his life, came to recognize that "God was present everywhere and in everything."

Once a person recognizes the "divine dignity" of every created being, Perry said, he or she recognizes a responsibility to "give glory to God by respecting and caring and promoting a sense of 'being in this together,' that life is one and each of us brings a special contribution."

The interconnectedness of all creatures should help people to recognize that when they hoard riches and resources, they are harming their own brothers and sisters, especially the poor, he explained.

St. Francis' canticle "is not just a flowery song about how we should live with nature. It is challenging us to revise our entire way of living our lives" in accordance with Gospel values, he said. "If someone is starving somewhere in the world, we are responsible."

The canticle is a call for people to recognize that they are sons and daughters of God and brothers and sisters to one another, he said, "part of one family that embraces all creation: trees, sun, rivers, wind, fire -- all of these because they all give glory to God."

While St. Francis' praise of Brother Sun and Sister Moon has been romanticized in many ways, Perry said, the obligations it carries are very realistic and concrete: to defend human dignity, especially the dignity of the poor; to promote dialogue and reconciliation to end war; to safeguard the earth and all living creatures; and to learn to live with just what one needs, not all that one wants.

Speaking before the scheduled release June 18 of the encyclical, Perry said the title signals Pope Francis' belief that the entire church and all its members must be in solidarity with the poor, "must be about peace" and must respect the planet.

By praising nature's harmony with God, St. Francis' canticle helps people understand what kinds of relationships they must have in order to live in peace and to give glory to God, he said. Stories about St. Francis, such as the one about him taming a wolf who was attacking the people of Gubbio, could really be stories about how "the population was really terrorizing itself" with family feuds, neighbors fighting and towns battling each other for control of territory and wealth, the Franciscan said.

As with the people of 13th-century Gubbio, so today with climate change and drought and more violent storms, Perry said, "nature is barking, nature is chasing after us, telling us we have got to wake up. It's disturbing us; it is not disturbing in order to threaten our lives. It is telling us we are already a threat to ourselves. We're a threat to the world. Nature is telling us, 'Step back from the brink before it's too late.'"

In the work of St. John Paul II, retired Pope Benedict XVI and Pope Francis, he said, the Catholic church presents a vision of "human ecology, social ecology and the natural ecology."

Focusing on just one, Perry said, "can lead us to misrepresent what God wants."

While the Judeo-Christian tradition says God chose to have a special relationship with human beings, it does not mean human beings have a right to exploit and abuse other creatures or the natural environment, he said.

"What happens in exploitation without limitation is that not only is nature stripped of its dignity, which God gave it -- we cannot deny that -- but we are progressively stripped of our own dignity" as those called to care for creation, he said.

Perry said he expects Pope Francis to use his encyclical to promote an "integral ecology," which urges respect for the human person and God's plan for human life, for just social relationships and for care of the natural world.

The point is not "to shame" those who are destroying the earth or to disagree with the majority of scientists who say global warming is real and is a threat, Perry said. Rather, like St. Francis in warring Italian towns or in the midst of the Crusades, "Pope Francis is trying to be the bearer of that white flag" to promote dialogue and help everyone reclaim their dignity as God's children called to care for creation.

Perry urged not just reading the encyclical but studying it with attention to what it is saying about the future of the planet, about Christian discipleship and about ways they can make a difference.