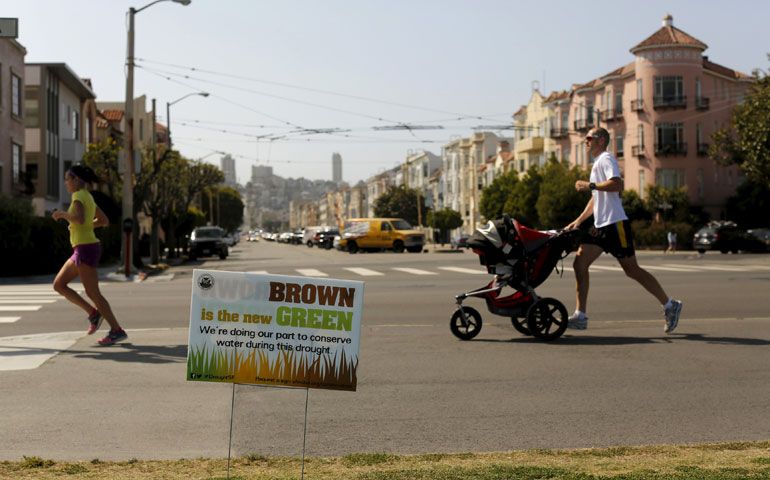 Runners jog past a sign on the Marina Green in San Francisco April 23. California is entering the fourth year of a devastating drought. (Newscom/Reuters/Robert Galbraith)
This article appears in the Francis: The Environment Encyclical feature series. View the full series.

It's no secret: Americans are conflicted on climate change. Polls show just half of the country affirming the idea that human activity is largely driving changes in the climate, and less than half view it as a major threat to the U.S., well below the perceived dangers posed by overseas extremist groups and nuclear programs.

What explains this disconnect on climate?

"In a way, it's kind of surprising that anybody pays attention. ... We don't want to think about something that's scary," said Susan Clayton, a psychology professor and chair of the environmental studies program at the College of Wooster in Ohio.

"You can call it the policy problem from hell," Anthony Leiserowitz, director of the Yale Project on Climate Change Communication, told NCR, "because you almost couldn't design a problem that's a worse fit with our underlying psychology or our institutions of decision-making."

The explanations for Americans' engagement, or lack thereof, with the issue are many, but begin with the eyes and ears. To start, carbon dioxide -- the fundamental component driving rising greenhouse gas emissions -- is an invisible gas.

The lack of visible evidence adds to the fact that few regularly talk about it. A March Yale-George Mason University study found just 4 percent of Americans hear about climate change in their peer groups at least once a week, and 19 percent hear about it in the media weekly. One in 10 knew of the scientific consensus (97 percent of climate scientists affirm global warming is occurring and human-caused) -- a mental blindness attributed to ineffective scientific communicators, subpar media coverage and an active disinformation campaign.

The lack of a consistent national conversation on climate change makes the issue appear distant, perceived not only as decades or even generations away, but more likely to impact polar bears and Pacific islands -- or everywhere but America.

When conversations do occur, deeply held individual values and beliefs often distort the data. The concept of motivated reasoning suggests people tend to look for evidence that reinforces what they already believe, and to ignore, discount or deny facts that contradict those firmly held positions.

"If there's a conflict between the facts, so to speak, and the values that guide my life, then my values will win," said Per Espen Stoknes, author of What We Think About When We Try Not to Think About Global Warming. Stoknes listed dissonance and identity issues among five psychological barriers to the climate message.

The motivation driving them went deeper than liberal versus conservative, researchers found, to egalitarian versus individualism worldviews. Pro-freedom and anti-government views led dismissives to challenge climate science largely from a fear of the potential solutions to "the ultimate collective action problem," Leiserowitz said.

"If your basic worldview is that government is inherently evil, then they're very afraid of this issue because it's going to require some role for government," he said.

Beyond how climate change is cognitively engaged, Stoknes in his book looked at how it is presented, often in a frame of doom and gloom.

"We've had 25 years now, or more, that we've heard the message, 'If we don't change our way of making a living, then we're heading toward a burning world or a catastrophe or the end of our civilization,' " he said.

Such framing, common in religious contexts, often leads to "apocalypse fatigue," Stoknes said, and for people to avoid messages and messengers that tell of all the ways the world will end. In preparing for Pope Francis' upcoming encyclical on the environment, the Global Catholic Climate Movement found that messages on Facebook framed in Christian identity tested better than ones addressing creation care or moral imperatives, with the "dangers of climate change" message receiving the lowest "like" rate.

When the message isn't conveyed in terms of fear and guilt, it's usually done through numbers -- sea level rise in feet, atmospheric carbon increases in parts per million -- that don't easily register with people.

"There's nothing in the way climate presents itself that lends it to triggering a sustained sense of urgency," Stoknes said.

Part of that relates to how human brains function and the two primary information processing systems: the rational, slow-working analytic system that deals with logic and abstract thoughts; and the older, intuitive, emotion-based experiential system, home of the fight-or-flight response.

For most, the experiential system is more active in daily decision-making that prefers efficiency and minimal mental work. That makes changing behaviors in response to climate messages difficult, Clayton said, as it requires higher levels of motivation and processing to engage the issue than to continue the status quo.

"It really takes something significant to kind of shake people into re-examining their normal behaviors and routines," she said.

While humans are well wired to deal with immediate, physical threats, they're less so at dealing with abstract ones.

"Climate change is not a hazard, is not a risk like a saber-toothed tiger," Leiserowitz said.

Or even ISIS, a threat that, while distant in space, carries a visual of beheadings that activate visceral, emotional responses. Nuclear war shares with climate change traits of global and potential catastrophe, but also has powerful images at its heart: the mushroom cloud and the devastating aftermath of bombings in Hiroshima and Nagasaki.

In 1962's Silent Spring, Rachel Carson dealt with another invisible environmental threat: DDT and pesticides. Carson succeeded in raising American environmental awareness -- and concern -- by framing the issue around the potential loss of songbirds, a creature many experienced and enjoyed in their daily lives, Leiserowitz said.

"I think that particular connection [on climate change] has not yet been strongly made for most Americans. They still think of it as this big, global abstract problem that is not connected to their own locality," he said.

To connect the dots, Yale Climate Connections has broadcast since August short radio reports of Americans describing how climate change has impacted their lives, as well as solutions they've sought.

The aim is "to help people understand that it's happening here and now," Leiserowitz said, adding that extreme weather events, like California's drought, offer "teachable moments" as national attention turns toward them. Another big step could come from better publicizing of the scientific consensus, what Yale researchers have called "the gateway belief."

Zoos could play a powerful role in transcending barriers of ideology and to deliver an effective message on climate, according to Clayton's research. A 2013 study found that zoo visitors showed a higher level of concern about climate change than did the general public, and listed zoos as second to scientists as a trusted source of environmental information.

"People actually talk about enjoying their visit to the zoo as an opportunity to talk to their family and friends about environmental issues," Clayton said.

Stoknes also pointed to the power of social networks, with one study showing the main motivator for conserving energy was not to save the planet, future generations or money -- but because their neighbors do it. He added that small steps could make big strides in behavior, such as adjusting printer defaults to two-side printing (saving paper and energy costs) or presenting the life-cycle costs, rather than point-of-purchase price, of appliances. Changes like those place the climate issue prominently in people's lives and allow consistent actions to reinforce eco-friendly attitudes.

As for the pope, Stoknes said Francis' encyclical could help reshape the climate story toward one centered on improved quality of life and stewardship of creation. Such a track could send a ripple effect through Catholic social networks, though it could backfire, he said, if the pope focuses more on the "doom" story and assigning blame for a coming calamity.

"In terms of the quality of life and the stewardship [role], there is no better messenger than the Catholic church," he said.

Currently, most Americans view climate change as an environmental, scientific or political issue, Yale research shows, with only two in 10 seeing it as a moral issue and 6 percent as a religious one. Given Francis' favorability in the U.S. (70 percent among all Americans; 90 percent with Catholics) and his immense megaphone, Leiserowitz believes the pope could "introduce an entirely new discourse" to the American climate conversation.

A February Reuters poll did find two-thirds of Americans believing world leaders have a moral obligation to reduce carbon emissions, and 72 percent saw a similar personal obligation. While many use moral language when speaking of the climate -- from President Barack Obama to U.N. climate chief Christiana Figueres to Leonardo DiCaprio -- having the pope deliver the message adds authority to the claim.

"The messenger is often more important than the message," Leiserowitz said, "and one of the first things people are doing, even if it's unconscious, is saying, 'Do I trust this person who's telling me this?'"