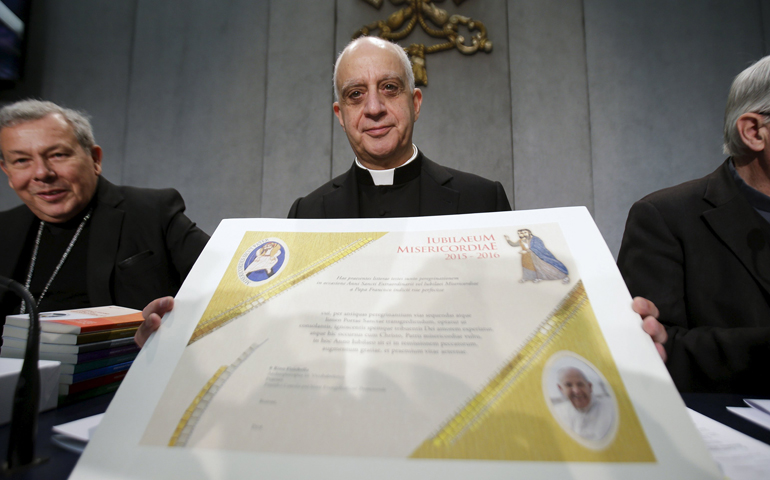 Archbishop Rino Fisichella shows reporters Dec. 4 the certificate that will be given to the pilgrims who will arrive at the Vatican by foot during the Year of Mercy.

The man Pope Francis put in charge of coordinating events for the Extraordinary Holy Year of Mercy -- Archbishop Rino Fisichella -- has announced that the fledgling Jubilee of Mercy is already off to a roaring success.

The archbishop, whose day job is heading the Pontifical Council for the New Evangelization, told journalists at a press conference on Jan. 29 that in just less than two months since the jubilee was launched (last Dec. 8) nearly 1.4 million people have already taken part in Holy Year events in Rome.

He said 40 percent of those were non-Italians.

Presumably that means all these pilgrims walked through one of the many holy doors located at a number of basilicas, shrines, the main international airport and even a soup kitchen (though hopefully not the several prison chapels) throughout the Eternal City.

But is counting noses really the measure of success?

Fisichella, to his credit, admitted that it is not.

"A Holy Year of Mercy goes well beyond numbers," he said.

He then suggested that the real test of the jubilee would be how well it actually helps people "understand the ways in which God's great love manifests itself in their daily lives."

But before he made that important clarification, the 64-year-old archbishop let the mask slip and acknowledged that, in fact, it is a point of pride for the Vatican that the crowds flock to Rome.

"All these people did not sleep at my house or under the bridge," said the archbishop of the more than one million pilgrims that have already come for the Holy Year.

His remark was a clear swipe at Rome's hotel association, which has complained that tourism in the Eternal City has plummeted due to fears of terrorist attacks and bad planning by the jubilee organizers.

Fisichella insisted his comment was not meant to be "polemical." He said it was "just to say that they [the many pilgrims] had to have stayed someplace."

But the New Evangelization chief, who could end up with a cardinal's hat at the end of his jubilee organizing efforts, did not hold the press conference to give a report on the latest Holy Year head count. Would that it were the only reason.

No, he called the presser to offer details about two events that are taking place in the next several days leading up to Lent.

Both of them are aimed, fundamentally, at one thing -- getting people to go back to confession, a practice most Catholics gave up a long, long time ago.

Pope Francis is popular and influential, but it's unlikely that even he will be able to spark a revival in a practice that most Catholics know (correctly) is not essential to their membership in God's household.

But this is one verdict of the "sensus fidelium" that it seems the pope does not want to acknowledge.

Instead, he will be commissioning more than a thousand priests from all over the world to be "missionaries of mercy". He'll do that on Ash Wednesday at a big Mass in St Peter's Basilica, sending these priests back to their local churches with special authority to forgive sins that are normally reserved to the Holy See.

Archbishop Fisichella noted that these envoys would have the "mandate to announce the beauty of the mercy of God while being humble and wise confessors who possess a great capacity to forgive those who approach the confessional."

We don't have a list of these 1,071 missionaries of mercy, because the archbishop said if the names of these "super confessors" were published they might be subjected to an avalanche of emails and phone calls. Really? Are there that many people out who have committed one of the five sacrileges that only the pope's delegates can forgive?

In any case, the "missionaries of mercy" concept sounds extremely dubious. Some would even say kooky.

But not nearly as kooky and outright weird as the second Holy Year "event" that Fisichella unveiled last week.

Here it is: the Vatican will be displaying the bodies of two dead Capuchin saints for an entire week for its Holy Year pilgrims to venerate. They are shipping them in from their normal resting places on either ends of the Italian peninsula.

It's more than a little ironic that Fisichella, who is considered to be one of Italy's most intelligent theologians, is being asked to promote this medieval, pietistic practice. He's the same theologian who, along with then-Cardinal Ratzinger, help ghostwrite John Paul II's 1998 encyclical, Fides et Ratio (Faith and Reason).

He did his best to make a kooky idea sound as reasonable and normal as possible by emphasizing that "urns containing the relics of Saint Leopold Mandić and Saint Padre Pio of Pietrelcina" were being brought to Rome.

But they are not urns. They are glass coffins.

And under each of them is showcased the embalmed corpse of a bearded friar dressed in a new brown Capuchin habit.

These life-sized "urns", as the jubilee organizer calls them, will be displayed in two different churches in Rome for public veneration on Feb. 3 and 4. Then on the evening of Feb. 5 the two transparent caskets will be carried in a long, solemn procession from the opposite side of the Tiber River all the way up and into St Peter's Basilica.

The dressed-up corpses (let's call them what they are) will then be placed in front of the main papal altar for veneration for the next several days until Ash Wednesday.

Fisichella said people would be able to view them in the same way folks paid their respects to John Paul II in 2005 as he lay in state several days prior to his funeral.

But this is not a wake and the two Capuchin saints did not give up the ghost only yesterday. Padre Pio died in 1968; and Leopoldo Mandić in 1942.

But, beyond all that, this is the 21st century. Not the Middle Ages.

Do the men in the Vatican -- including our dear Pope Francis -- really think that dressing up dead bodies, even of the holiest of saints, is really going to help people "understand the ways in which God's great love manifests itself in their daily lives"?

Most reasonable Catholics -- Italians included -- disagree with the need for such props and gimmicks the jubilee committee is using to promote the Holy Year.

The Vatican -- and, again, even the pope -- categorizes these as "popular devotions." But most of them are rooted in Mediterranean superstition and folklore. They are completely unnecessary for living the Christian faith and, in some cases, may even detract from the true message of the Gospel.

Leave aside the ridiculous notion of cheap grace. This is grace cheapened.

(Note: Venerating lifeless corpses has absolutely nothing to do with believing in the communion of saints!)

Pope Francis had an extremely important insight when he decided to call the Holy Year of Mercy. He's done so at a time when the world has never been more aware of its divisions or more uncertain about how to resolve its seemingly irresolvable conflicts and heal its apparently incurable wounds; when it has never been so incapable of achieving peace and bringing about reconciliation.

The Holy Year is the pope's attempt to help the world -- but even more so the church -- find the solution to this impossible situation. And he is convinced that it will only be done when people allow themselves to be healed by God's mercy and then, in turn, offer it to others; when they allow themselves to be forgiven and, in turn, begin forgiving others.

Drawing "pilgrims" to the Eternal City so they can boost the local economy by walking through magic doors or bowing before a spruced-up corpse under a glass display case is not necessary for this.