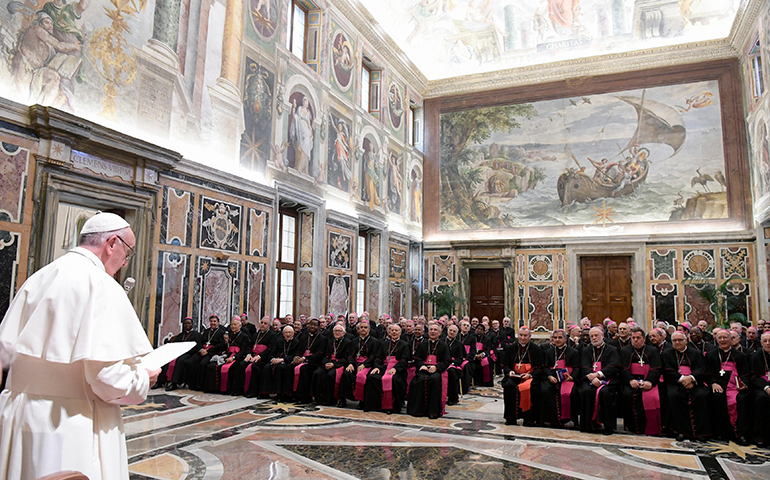 Pope Francis speaks during a meeting with nuncios Sept. 17 at the Vatican. (CNS/L'Osservatore Romano, handout)

By now it should be clear.

Pope Francis really believes there is a serious lack of quality among priests and bishops in the Catholic church. Otherwise, he would not talk so often about the negative traits of certain men in ordained ministry, as he's done again several times in recent days.

"The world is tired of lying charmers and -- allow me say -- of 'fashionable' priests or 'fashionable' bishops," the pope said on Sept. 16 to a group of 94 bishops consecrated in the last two years for dioceses in mission territories.

"The people 'scent' -- the People of God have God's 'scent' -- the people can 'scent' and they withdraw when they recognize narcissists, manipulators, defenders of personal causes and standard bearers of worthless crusades," the pope warned the so-called "baby bishops," who were in Rome for a training seminar.

He also cautioned them about too easily accepting seminarians or incardinating already ordained priests into their dioceses.

"Don't allow yourselves to be tempted by numbers and quantity of vocations, but rather look for the quality of discipleship. … And be careful when a seminarian seeks refuge in rigidity -- because underneath this there's always something bad," he said.

The pope also warned the bishops to beware of a certain "sickness of our times," which he said was incardinating "clergy who are wandering or in transit from one place to another." He told them to act with "prudence and responsibility" in this area.

Why does Francis feel the need to say all this? Because he obviously sees it as a common problem throughout the Catholic world.

"It's a horrible thing for the church when its pastors act like princes," he said just two days earlier at his Wednesday general audience.

He was not being hypothetical.

He was denouncing something he believes is far too prevalent -- that there are Catholic bishops who, in contrast to the people they've been appointed to serve, live more like royalty or wealthy CEOs.

He made that observation already in the first weeks after becoming pope at a meeting with papal nuncios (or Vatican ambassadors), men who play a key role in the selection of bishops.

"In the delicate task of carrying out the investigation required prior to making episcopal appointments, be careful that the candidates are pastors close to the people," he told them.

On that occasion he instructed the nuncios not to be recommending men who are "ambitious" -- whether they be priests who are lusting for the episcopate or those already bishops who are angling to be promoted to a more prestigious diocese.

The quality and appointment of bishops is something Pope Francis has also discussed at least two or three times with his group of nine cardinal-advisors, known colloquially as the C9. In fact, it was on the agenda at their most recent meeting (Sept. 12-14).

"The cardinals reflected extensively on the spiritual and pastoral profile necessary for a bishop today," said Vatican spokesman, Greg Burke, in a statement following the latest C9 gathering.

"They spoke of the diplomatic service of the Holy See and of the formation and duties of apostolic nuncios, with particular attention to their great responsibility in choosing candidates for the episcopacy," the spokesman added.

Burke gave no further details in his statement. But Andrea Tornielli -- veteran Vatican reporter for the Turin-based daily La Stampa and its Vatican Insider website -- said the talks dealt merely with revising the questionnaire currently used to assess the qualities of bishop candidates.

Re-elaborating this highly confidential inventory, which the nuncio asks select members of the clergy and some baptized faithful to fill out, was also discussed at the last C9 meeting in April.

"The procedure [for selecting bishops], which always allows for a certain degree of discretion," wrote the usually well-informed Tornielli, "is apparently not to be reformed. What is going to change is the questionnaire used."

This may be quite necessary and urgent for the short-term. But it is bad news for the long haul, because it is precisely the procedure for selecting bishops that must be overhauled.

The current system the church uses to seek out and appoint candidates for episcopal service is far too often based on cronyism inherent in an old boys' network, which -- since the mid-1800s -- is almost exclusively anchored in and controlled by officials (other bishops) based in or beholden to Rome.

The apostolic nuncio plays a major role in drawing up the terna of (the top three) candidates for a particular episcopal post. These are then sent to the Vatican -- either the Congregation for Bishops, for most dioceses, or the Congregation for the Evangelization of People (Propaganda Fide), for mission territories.

The members of these offices (e.g., there are roughly 30 cardinals and other ranking prelates from around the world who are members of the Congregation for Bishops) discuss and vote on the candidates. Then the congregation's prefect (with help of his staff) presents the recommendations to the pope who makes the final decision on the appointment.

However, well before this happens, bishops, in too many cases, have already begun "grooming" someone -- perhaps a star seminarian or their priest-secretary -- to be a future member of their very exclusive club, the episcopal college.

(How exclusive? Numbering just over 5,200 men, bishops constitute only .0004 percent of the nearly 1.3 billion Catholics throughout the world.)

Customarily, the ordinary of large diocese has a fairly good chance of pinpointing the man or men he wants as an auxiliary bishop. And if he's well connected in Rome, especially with members of the pertinent congregation, this major hierarch can often help advance an auxiliary (or another bishop friend) to head his own diocese.

The congregation members, themselves, have a major say in appointments. This is why it was considered significant that Pope Francis did not renew Cardinal Raymond Burke's membership on the Congregation of Bishops, but replaced him and the retired Cardinal Justin Rigali (another member), with Cardinal Donald Wuerl and Archbishop Blase Cupich, two men seen as moderate, sensible and more in line with the current pope's vision of the episcopacy.

Replacing the current "players" in the episcopal appointment system -- nuncios, as well as the members and prefects of congregations -- and making more explicit the pastoral qualities required for good bishops (through a revised questionnaire) is important. But, again, it is temporary solution.

Francis says he wants to promote a healthy decentralization of the church. And it is hard to think of anything that currently is more centralized that Rome's appointment of bishops around the world.

There would probably be just as many problems -- and more -- if the church adopted (or returned to) some mythical process whereby priests and people held general elections to vote for their local bishop.

Rather than opting for a democratic procedure, it would certainly be advantageous if the church were to re-appropriate a process of discernment based primarily at the local level.

If Francis is right and the holy people of God really do have a "scent" -- or God's "nose" -- for what is right and good in a bishop, then we must find a way to include them more fully in the selection process.

As it stands now, the appointment of bishops is all too frequently the result of an incestuous old boys' network of promoting people within its clerical club.