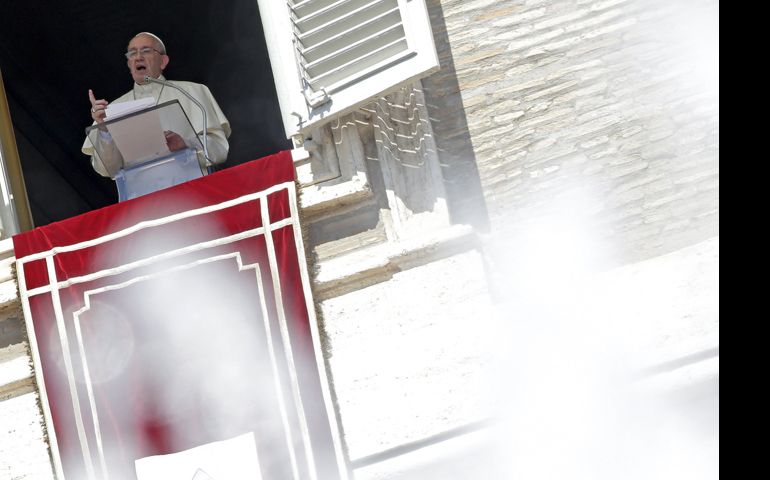 Pope Francis leads the Angelus from the window of his studio overlooking St. Peter's Square at the Vatican Aug. 30. (CNS/Max Rossi, Reuters)

Pope Francis has been Bishop of Rome for only two and a half years. In this relatively short period of time he has been incredibly successful in reigniting the hopes and enthusiasm of reform-minded and self-described Vatican II Catholics.

Through prophetic gestures and words he has emerged as a sort-of "evangelical free-spirit" unencumbered by the restrictions of the Vatican's often-arcane protocols and human traditions. This has created an irresistible worldwide appeal even among non-Catholics and non-believers.

It's no wonder why so many people talk about a Francis Revolution, a notion that -- ironically -- causes more consternation among certain traditionalist Catholics than it does among avowed atheists.

But whether one thinks of history's first Jesuit pope as a breath of fresh air or as a threat to the church's (still, very much in-tact) Tridentine edifice, the more fundamental question is this: Can Francis leave a lasting impact on the church that none of his successors will ever be able to undo?

It all depends on his ability to make significant changes (reforms) to the current structures that regulate ecclesial governance and ministry. The pope has rightly insisted that the first reform must be attitudinal change and he has energetically initiated this. But without structural changes Francis' only real legacy will likely be that he was a prophetic, saintly and an evangelical "pope of the poor." Full stop.

That would have been the same legacy of Pope John XXIII, too, had he not convened the Second Vatican Council, the most transformative event in the Catholic Church over the past five hundred years.

It is still too early to know what will be the long-lasting heritage of the pontificates of John Paul II and Benedict XVI. But it's likely that part of it will be their efforts (for nearly thirty years as a tandem) to domesticate the Council's reforming spirit and guard against any further structural changes or doctrinal developments.

There are clear indications that Pope Francis does not want to convene another ecumenical council (he has said he wants to implement the last one). And there is also ample evidence that he does not wish to continue the restorationist policy of his two most recent predecessors.

His November 2013 apostolic exhortation, Evangelii gaudium, offers a blueprint for a very different type of pontificate. This remarkable document is very much the Argentine pope's more expansive interpretation of Vatican II's dogmatic constitution, Lumen Gentium, and it constitutes his own manifesto for Church reform.

At the heart of this reform are synodality (the entire Church walking, discerning and evangelizing together), episcopal collegiality (shared governing responsibility between pope and bishops) and subsidiarity (decentralization of decision-making authority) -- to name just three core principles the exhortation says are needed in order to renew the church. What the document leaves unsaid is that the creation of new structures or the significant alteration of old ones is absolutely essential to making these principles integral to the Catholic church's life. And they are key to hastening the increasingly urgent task of bringing about full church unity, especially with the Orthodox and the Reform communities.

But up to this point the only major reforms under Francis have been in the realm of Vatican financial management. Most people in the church, and especially those in the media, have lauded Francis' reorganization of the so-called Vatican bank and his creation of a major Vatican department to oversee all financial activity. They have also praised him for recently undertaking a major restructuring of the Vatican's media outreach.

And these are certainly commendable initiatives. But assuring more accountable stewardship of the church's financial resources or its communications activities pales in significance to, say, providing Christ's faithful with the spiritual care that is their baptismal right.

For example, there is an acute priest shortage throughout most of the world and unless the structures and disciplines that regulate ordained ministry are changed the shortage will become even more severe.

Francis could make a major contribution to this area as a reformer if he were to revive -- as he has indicated his willingness to do -- the ancient practice of allowing married men to be ordained to the presbyterate. This will not, in and of itself, stem the tide of those leaving the church, but it would be a just and charitable response to those many millions of Catholics who are now deprived of the sacraments, especially the Eucharist, because there are too few priests.

A married priesthood, if implemented with care and farsightedness, could also contribute to the dismantling of the cancer of clericalism, which finds especially fertile soil amidst an all-male (and disproportionately gay) priestly class.

The institution (or some scholars argue, the re-institution) of the female diaconate could also be another way of countering the unwholesome clericalist ethos. It, too, would be an act of justice by bringing a healthy presence of women into the ordained ministry and decision-making levels of the church.

The necessary reform of the Roman Curia is one of the first projects Francis began studying immediately after his election. The first small but important step was the creation of a Council of Cardinals to assist him in this enterprise and in his "governance of the universal Church." The pope has met with his C9, as it is often called, only ten times since it was established. They will hold their next gathering from September 14-16.

People are understandably concerned that more than two years have passed and no real reform of the church's central bureaucracy has been brought forward. Some are worried that, in the end, any "reforms" will only be window dressing.

Perhaps the most concrete way Francis can escape this fate and forge his legacy as a true reformer of the Roman Curia is by curbing the authority of its various offices and bolstering that of the Synod of Bishops.

Synodal or patriarchal church governance is more ancient than the monarchical papacy. And Francis could restore this dynamic by subjugating the Curia to the authority of the Synod of which he is head and president.

When Paul VI re-established the Synod of Bishops within the Roman Church in 1965 he intended it to be merely a papal advisory body. But because of ancient custom he could not but stipulate, albeit cautiously, the following:

It can also enjoy the power of making decisions when such power is conferred upon it by the Roman Pontiff; in this case, it belongs to him to ratify the decisions of the Synod.

This clause is rarely quoted today. But Pope Francis could expand it and make the Synod's deliberative power normative. The Bishop of Rome's special role as chief pastor of the universal church would not be threatened since he would retain his prerogative to ratify or veto the Synod's decisions.

Yes, Francis has been a breath of fresh air. He has instilled new hope into the lives of millions of Catholics. And this is because his words and gestures continue to suggest that healthy change and development can take place in the structures and disciplines of the church.

But his longstanding legacy will depend on whether or not they actually do.

Recording people's lives with an eye toward their souls