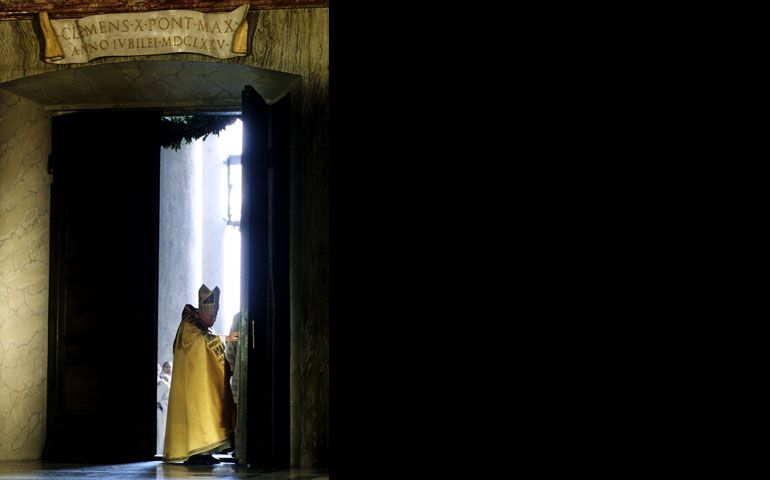 When the hated and feared Pope Boniface VIII proclaimed the first-ever holy year, or jubilee, for the city of Rome back in 1300, he began a tradition that has often been marked by controversy.

He and many of his successors used these special occasions to draw large numbers of pilgrims (and their money) from all over the world to the Eternal City. The goal and effect were often the same -- to boost the pope's power and popularity and to enhance the church's finances. In the late Middle Ages, abuses such as the sale of indulgences further sullied the more noble purpose for which the popes professed to hold these yearlong celebrations.

During the jubilee of 1600, a villainous Dominican priest named Giordano Bruno was even burned at the stake in Rome's Campo de Fiori, one of more than 30 heretics executed during the reign of Pope Clement VIII.

Some historians claim that an unhealthy modern-day fixation with the papacy ("papolatry") is still one of lasting effects from the holy year of 1950, which came immediately in the aftermath of World War II and in an age of increasing air travel and mass communications. Instead of coming to Rome to visit the tombs of the apostles and saints, the millions of pilgrims flocked primarily to ornate ceremonies led by Pope Pius XII, the man known mythically as the "Pastor Angelicus."

They did so in even larger numbers and with yet more feverish intensity during the two jubilees that John Paul II led in 1983 and 2000. The sainted Polish pope was an especially iconic focus during the holy year at the start of the third millennium. Despite debilitating effects of Parkinson's disease, he presided over numerous large ceremonious week after week at the Vatican.

Several years before the Great Jubilee of 2000 even started, Vatican officials and Rome's business and political leaders had already begun making elaborate and costly preparations for the big event.

Churches and city buildings were scrubbed clean of decades of black auto exhaust. Convents and religious houses were transformed into pilgrim hotels. Tax incentives were offered to merchants, spurring the renovation of restaurants, coffee shops and other establishments. New roads, a refurbished train station and other construction projects were projected.

The wife of Rome's mayor even started a lucrative parallel public transport system especially for pilgrims. And when it was all over, the man that organized Jubilaeum 2000 with such pharaonic skill and flourish, then-Archbishop Crescenzio Sepe, ended up becoming a cardinal -- even before he was appointed to a new Vatican position!

The holy year that was designed to carry the church into the 21st century and the third Christian millennium had about everyone in Catholic officialdom, and in Rome's tourist industry, hailing it as a whopping success.

But the Great Jubilee of 2000 was really not all that great. At least, not as great as it could and should have been, especially when there was so much talk of mercy and reconciliation but very little action regarding the original Old Testament purpose of holding jubilee years -- to rest the land, forgive debts and free the slaves.

Although special plenary indulgences were extended to pilgrims, as in keeping with church custom, the offer was too parsimonious for such a highly acclaimed and great jubilee. If John Paul II's intuition was to usher in an era of mercy and forgiveness, he lacked the physical and mental energy as well as the necessary support of his closest aides to do so with any real creativity or boldness.

For example, the Vatican could have facilitated easier and more widespread dispensations, annulments or sanations for so many Catholics in irregular marriages.

It could have been more generous and merciful toward the tens of thousands of nonfunctioning, married priests -- and, in turn, toward Catholics communities in need of priests -- by allowing those who desired to resume their ministry in some new way to do so.

How many other debts -- spiritual, moral, financial -- were not forgiven during the Great Jubilee?

Pope Francis has a chance to make that right. And the timing of his announcement for this new Holy Year of Mercy suggests that it's exactly what he intends to do. The holy year does not officially begin for another nine months, which is not enough time to initiate a "new works" program to accommodate (and profit from) the millions of pilgrims that the yearlong celebration is expected to attract.

But seven months -- which is exactly how long before the Synod of Bishops holds its next session on the family -- is plenty of time for the just-announced and high-profile jubilee to add momentum to proposals for a merciful approach toward people in difficult marriage and family situations. That Francis supports such proposals should be clear to anyone that has read his apostolic exhortation, Evangelii Gaudium, or his official interviews.

The Jesuit pope has involved all Catholics, and not just the bishops, in these discussions from the very beginning. He did so when he instructed the prelates to survey their people before last year's synod gathering to gauge their concerns and beliefs regarding family, marriage and human sexuality. But it is obvious that some of these bishops are not really listening with a sympathetic ear or a merciful heart. Announcing plans for the Holy Year at this time is Francis' latest effort to get them to do so.

As he wrote in Evangelii Gaudium:

"The Church must be a place of mercy freely given, where everyone can feel welcomed, loved, forgiven and encouraged to live the good life of the Gospel."

Mercy should trump law, especially during Holy Year of Mercy