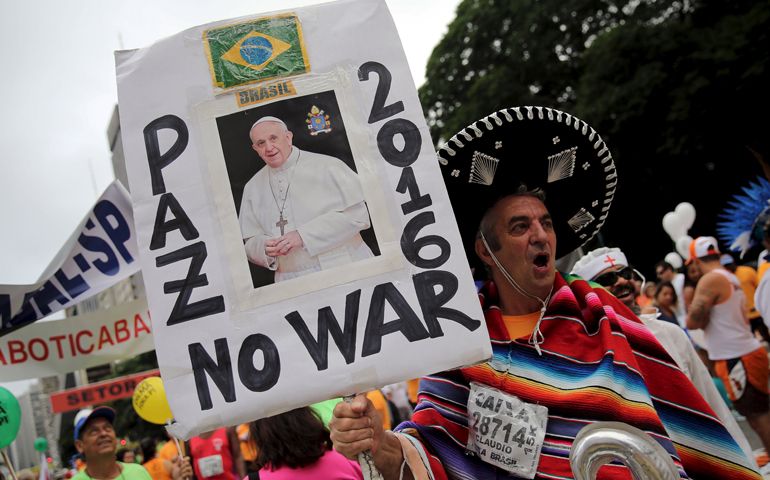 A runner holds a poster with the image of Pope Francis Dec. 31 before the annual St. Silvester Road Race in Sao Paulo. The poster reads "Peace, No War in 2016." (CNS/Nacho Doce, Reuters)

Those who carry out vicious acts of terror in the name of the so-called Islamic State (which, despite its twisted claims, has nothing to do with God or religion) have become a major threat to our world.

Every terrorist attack they, and those whom they inspire, inflict on unsuspecting citizens serves to further disrupt our daily routines and well-established ways of life. They are finding ways to spread their turmoil to every path of God's green and, in many places, already scorched earth.

But these misguided and depraved fanatics are not the greatest menace to life as we currently know it.

There is a far more dangerous threat out there.

It is Pope Francis.

No, he is not waging a reign of terror. But he is prophetically disseminating a message that -- if we actually heed it -- could easily unsettle and change our lives in ways far more radical and destabilizing than anything unleashed by Islamic State militants.

He's doing so on multiple levels and on various fronts. And he is meeting pockets of resistance in every sector of society, even inside the Catholic church.

There are Sunday Massgoers who bristle at his insistent calls for a major reform of the "economy that kills," including the application of greater regulations on free markets. There are wealthy, generous benefactors of Catholic dioceses, people who try to be as responsible with their resources as they have been hard-working in earning them, who are offended by his anguished cries for a more just distribution of wealth.

There are good and decent citizens of all faiths and of no faith at all, compassionate people who are offended by Francis and believe he is plain wrong in demanding that Europe and North America throw open their doors to migrants and refugees from Africa and the Middle East.

There are serious Catholics who are scandalized by the pope's endless exhortations to embrace -- and not dare to judge -- those whom the laws of their church define as unclean or living in sin (such as the divorced and remarried, self-affirmed gays and lesbians, and those who, in good conscience, practice contraception).

They and others are horrified by Francis' conviction that the Roman church has no choice but to engage in dialogue with Christians who reject certain of its dogmas, with people of other faiths who don't believe in Jesus Christ, with those who do not believe in God, with skeptics and even with those who are the church's sworn enemies.

Every time the pope condemns arms manufacturers and the weapons trade, he infuriates those, especially in the United States, including Catholics, who believe there is a lawful purpose for individual gun possession at home and for massive military action around the globe.

So does he enrage the self-righteous when he rails against capital punishment and even against lifelong prison sentences, insisting that prisons and other correctional facilities should be transformed into centers of rehabilitation instead of those that merely impose punishment.

Francis calls to task -- some would even say he harangues -- just about everyone with one or other aspect of his overarching teaching on ecology as God's creation.

For example, there are those who believe that the pope has overstepped his authority and human decency when he insists that women have no right to terminate an unwanted or problematic pregnancy. There are others who say he is abusing his teaching office when he enters into the debate over climate change and sides with those who believe irresponsible human activity is the culprit.

But the most pernicious threat that Francis poses to so many in our society and our church is linked to his obsession with mercy.

Yes, mercy. It is a far more dangerous weapon than terrorist bombs.

That's because the practice of mercy requires that we forgive those who have hurt us, even in horrible ways. It means that we pardon them rather than demand, according to human justice, that they restore exactly what they have destroyed (even if that is, more often than not, impossible).

Mercy and forgiveness are the exact opposite of retaliation, vindication or even retribution.

Calling us to be merciful -- just as Jesus says we must not judge, but must turn the other cheek and love our enemies -- goes against our innate sense of justice and fairness.

It is true that those who have harmed us or who have broken the law must be held accountable for their wrongdoing. But without mercy, forgiveness and reconciliation, there can be no healing, for either the victim or perpetrator.

By refusing to show mercy and pardon to those who have attacked or abused us, we -- whether a nation, an institution, a particular group or a single individual -- can too easily end up clinging to our wounds with pride and a false sense of righteousness.

The only way to heal these wrongdoings is by letting go of them.

Francis' call for greater mercy in the world and in our lives is not some fuzzy, sentimentalist attempt to cover over faults or sweep wrongs under the carpet.

Rather, it is a challenging -- yes, even threatening -- message that will upend our lives if we truly embrace mercy and offer it to others.

The church, as the universal sacrament of salvation, needs to take up this summons to mercy.

This is the great intuition of Francis.

If it does not threaten some aspect of your life -- no matter if you identify as a traditionalist, a progressive, or anything in between -- then you probably aren't listening.