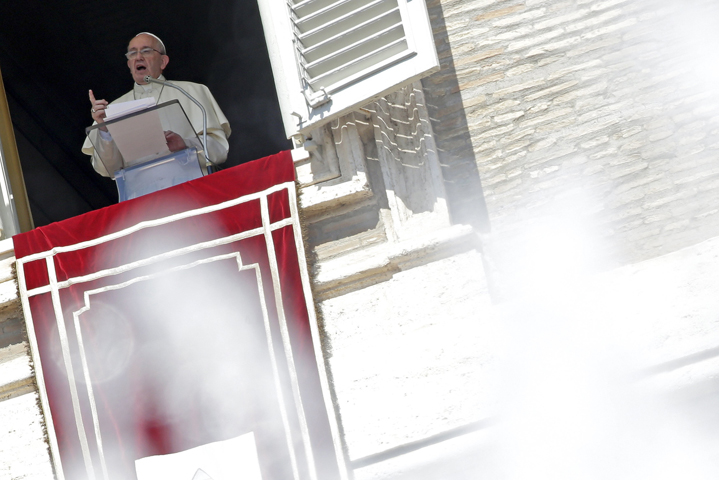 Pope Francis leads the Angelus from the window of his studio overlooking St. Peter's Square at the Vatican Aug. 30. (CNS/Max Rossi, Reuters)

In all his nearly seventy-nine years on God's green earth, Pope Francis has never once been to the United States of America.

And he'll see only a tiny patch of it when he makes his first and very brief visit there later next month.

The pope will spend slightly more than five days in just three metropolitan areas that are situated only a couple hundred miles apart -- from New York City down to Washington, D.C., and Philadelphia in between.

But, then again, this "commuter" papal visit was never meant to introduce Francis to the vast and multi-textured reality of a country that stretches nearly 2,800 miles across the entire width of the North American continent. Originally, in fact, it was never really conceived as a pastoral visit to the United States. At least not in the usual sense.

The primary reason the pope is making the trip at all is to attend an international event -- the Vatican-sponsored World Meeting of Families (in Philadelphia) -- not to encounter a wide and truly representative cross-section of the American Church and its people. That seems to have been an afterthought.

It was Benedict XVI, back in June 2012, that picked the City of Brotherly Love to host the family meeting and said he "look[ed] forward" to attending it.

But after he resigned the papacy less than a year later, there were no guarantees his successor would take on the commitment.

It was not until mid-November 2014 at an international conference in Rome that Francis finally ended the suspense. "God willing," he said, "I will go to Philadelphia for the 8th World Meeting of Families."

That announcement sparked a bidding war to entice history's first Latin American pope to use the trans-Atlantic voyage as an opportunity to visit several other places across the United States. Church officials in Mexico and Canada, the other two countries in North America, also hoped their nations might be included on the papal itinerary.

But as it turns out, once Pope Francis lands in the good ole U.S. of A., he won't be travelling very far at all. In fact, he'll stray no further than 65 or 70 miles inland from the Atlantic Coast.

That's about how far Philadelphia is from the Eastern Seaboard. And, by the way, it is not the only leg of the journey that has an international gathering as its main focus.

Add New York City to that list. The primary reason Pope Francis is going there is to address world leaders at the United Nations, not to marvel at the estimated $175 million dollar restoration of St. Patrick's Cathedral or take a ride through Central Park.

Francis will be going to the U.N. headquarters on Sept. 25, exactly 50 years after Paul VI became the first pope ever to address the international body on Oct. 4, 1965, the Feast of St. Francis of Assisi.

Since it is almost inconceivable for a pope to visit a country for the first time without at least stopping in its capital city, Washington is where Francis will begin his U.S. sojourn. His 48 hours in D.C. will be the most time he spends in any of the three metro areas (he'll be in New York for a little more than 39 hours and in Philadelphia for only 34.5 hours).

And Washington is the only place that will have an almost exclusively domestic audience at each and every venue. Not only will the pope go to the White House to meet President Obama, he will also address a joint meeting of the U.S. Congress.

There has been much speculation that Francis is going to read the riot act to the federal lawmakers, but his speech to them Sept. 24 and his address to world leaders the next day at the United Nations will be carefully crafted with the help of top aides. Cindy Wooden, Rome bureau chief of Catholic News Service, offers an excellent summary of the issues the Pope will likely bring before the politicians and statesmen.

One of the most interesting and important moments of the Washington leg of the papal visit could come on the morning of Sept 23 when Francis addresses all of the U.S. bishops at St Matthew's Cathedral. He is likely to offer his candid views on the type of bishops and pastoral focus that the Church in America needs today.

If there is a controversial element to the papal visit it is the canonization later that same day of Junipero Serra, a Franciscan from Spain that founded a series of missions in California in the 18th century. Some American-Indian groups have long protested that Serra's legacy is tainted by his harsh treatment of their indigenous ancestors.

But perhaps what is most unfortunate is that the first saint in history to be canonized on U.S. soil should be someone born and raised in Europe; and that some people continue to erroneously claim that he is the first Latin American saint for a country with a growing Latino population.

On each leg and in every city of his upcoming visit, Pope Francis will celebrate at least one public Mass. In Philadelphia and New York he will pray vespers with the local clergy, religious and seminarians; he will also meet immigrants in both those cities, while meeting a group of homeless and other poor people in Washington. Visits to a Catholic elementary school in East Harlem and a prison in Philadelphia will round out the various features of the papal itinerary.

But all in all, the pope will see very little of the diverse reality of Catholic life in the United States he has never before visited. In fact, he will not be going to any of the places where the Church is most alive and growing. His geographically restricted itinerary and the Draconian security measures being put in place by paranoid officials (they are right to be so, unfortunately) guarantee that.

Oh, and you may have heard that Pope Francis decided at the last minute to add a quick stop in Cuba to the upcoming journey. Just tacking it on, as it were. Actually, he's going to the Caribbean island first. And he'll be staying there for two-and-a-half days (68.5 hours to be precise).

It will mark the third time he's visited South America since becoming pope. And he's scheduled to travel there again next year, returning for the first time to his native Argentina and going to at least two other countries.

For now it seems doubtful, given his age and other global priorities, that there will be another visit to the United States. After the way this one was mapped out, that is a real shame.