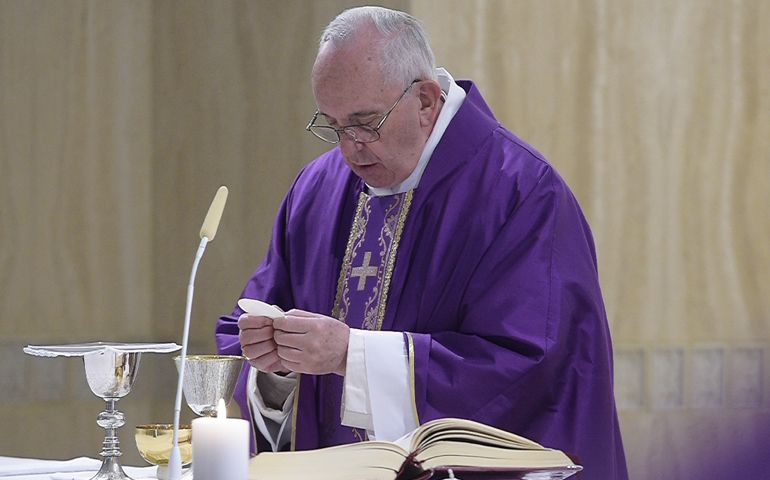 Pope Francis consecrates the Eucharist during morning Mass in the chapel of his residence at the Domus Sanctae Marthae at the Vatican March 14. (CNS photo/L'Osservatore Romano, handout)

Pope Francis is now in the fourth year of his pontificate.

And in this relatively brief period of time one could say he's worked nothing short of a minor miracle in the way he's restored hope and enthusiasm among so many people in the church and beyond.

This has been especially true for those Catholics who eagerly embraced the reforms and the reforming spirit of the Second Vatican Council (1962-1965) only to grow weary and dejected in the nearly thirty-five years of exile they experienced under John Paul II and Benedict XVI, popes they saw as reversing the journey mapped out at Vatican II.

For them Francis's election has been nothing else if not proof that the Holy Spirit still shows up at the occasional conclave.

History's first Jesuit and New World pope has simply been a breath of fresh air. Many people believe he's "more than we could have hoped for."

That doesn't mean he gets high marks across the board. As I tried to argue last week at Global Pulse Magazine, Francis has been disappointing on two issues in particular -- the sex abuse by clergy and the role of women in the church.

Nonetheless, Fr. Tom Rosica of Salt + Light Media is certainly correct when he says the pope has brought about a "revolution of tenderness, mercy and normalcy" (emphasis mine).

The American-born priest believes the so-called "Francis Revolution" or reform is no passing fad and is guaranteed to prevail because, as he says, "it is not emanating from Assisi, Loyola, Manresa or even from Rome, as significant as those holy places may be!" Rather, it comes from the lands where Jesus walked and ministered. Indeed, Rosica says it comes from the Gospel itself.

But not everyone is so enthusiastic.

"There are the innovators, like me, and there are those who, instead, want to return to the 'sound tradition', something especially prevalent among young priests," the theologian said in an interview last Friday in the Rome daily La Repubblica.

"The pope is in the middle. If he does not decide, he risks being (just) a shooting star," he added.

Mancuso, a former priest who counts the late Cardinal Carlo Maria Martini, S.J., as one of his mentors, does not share Rosica's optimistic assessment that Francis has already effected an irreversible reform.

And he's probably right not to.

If -- God forbid! -- the 79-year-old pope were to suddenly die, there is hardly anything he's done so far that a successor with a restorationist agenda could not undo, even without too much effort or controversy.

Up to this point, most of the Francis Revolution has been one of attitude and style. There's nothing at all wrong with that, but in Year Four of this pontificate those who are praying and pulling for Francis hope he starts making some substantial structural changes that are unassailable.

So far the only changes in structure (if you can call them that) have regarded the updating of the civil law code in Vatican City State and a small and controversial change to the annulment process in the Code of Canon Law. Francis also changed liturgical norms to allow non-priests -- including women -- to be among those whose feet are washed during the Holy Thursday Mass of the Lord's Supper.

Otherwise, he has slowly plodded along with his group of nine cardinal advisors (a sort of kitchen cabinet he invented) on what many people are still hoping will be a major reform of the Roman Curia.

But so far the pope has merely created a number of commissions or bureaus -- such as the Secretariat and Council for the Economy (two financial oversight bodies) and the Secretariat for Communications (the coordinating office of the Vatican's numerous media and information sections) -- and he has announced that he will eventually combine several other already existing offices (a family and laity grouping and a justice and charity conglomerate).

Observers like church historian Alberto Melloni have argued that there can be no real reform of the Roman Curia unless there is first a reform of the papacy. That's because the curia is directly dependent on the pope and its work is determined by how he exercises the Petrine ministry. The more that decision-making authority is centralized in Rome, which has increasingly been the case over the past thousand years (despite efforts to rebalance that at Vatican Council II), the greater the role and power of the curia.

Francis has made it absolutely clear that he wants to promote a "healthy decentralization." The only pope to ever serve as president of a national episcopal conference has also said that such conferences should exercise more authority, "including genuine doctrinal authority" (Evangelii Gaudium, no. 32).

"Excessive centralization, rather than proving helpful, complicates the Church's life and her missionary outreach," the pope says in Evangelii Gaudium, the 2013 document that remains the blueprint for his reforming pontificate.

The "two diametrically opposed forces" that Vito Mancuso spoke about are especially divided on this issue of centralization/decentralization. The "innovators" are cheering Francis on, but they are also growing impatient with his snail-like pace of reform.

On the other hand, those who claim to be upholding "sound tradition" (which, for many of them, seems to mean only the past five centuries of the Church's 2,000-year history) believe Francis is showing signs of irresponsibility and negligence in his exercise of authority. The difficulty for the pope is that so many of the world's bishops appear to hold this position.

Francis makes them nervous by his eagerness to raise questions on issues for which, they believe, he should be giving explicit guidelines if not definitive answers.

That was crystal clear at the two sessions of the Synod of Bishops that he has now convened. He asked for open and honest discussion both times -- for bold discernment. But the exercise must have been depressing for him when he saw that such a surprisingly high number of participants (members were mostly presidents of the world's episcopal conferences in 2014 and were mainly the elected representatives of those conferences in 2015) were practically incapable of any sort of creative theological or pastoral thinking that strayed from the letter of the law.

This poses a problem for the pope. If healthy decentralization is to work -- at least in the short term -- it will require that bishops in dioceses around the world are intelligent, courageous and capable of making decisions without having to constantly look to Rome for direction.

The best way for Francis to help bishops grow in this role is by further strengthening the authority of the synod, of which he is the president. A more thorough reform of this permanent body will be the vehicle by which he can begin resetting the lopsided imbalance between power in Rome and the local churches, between the center and the peripheries.

If historian Melloni is correct and reform of the Curia depends on reform of the papacy, then overhauling the Synod of Bishops is the place to start.

Pope Francis has given numerous signals that he would like to make the synod a more regular and essential component of universal church governance, which would constitute, in itself, a reform of the papacy.

But he will have to further change the synod's juridical status, as is his right.

And once it becomes the main body through which he pastors and governs the global church -- the pope in union with a representation of the worldwide episcopate -- the role and function of the Roman Curia will necessarily be redefined and most likely diminished.

Reforming the Synod of Bishops does not sound very exciting compared with all the eye-popping and headline-grabbing things Pope Francis has been doing these past three years. But if he succeeds in doing so it could be the most important church reform of the last thousand years.