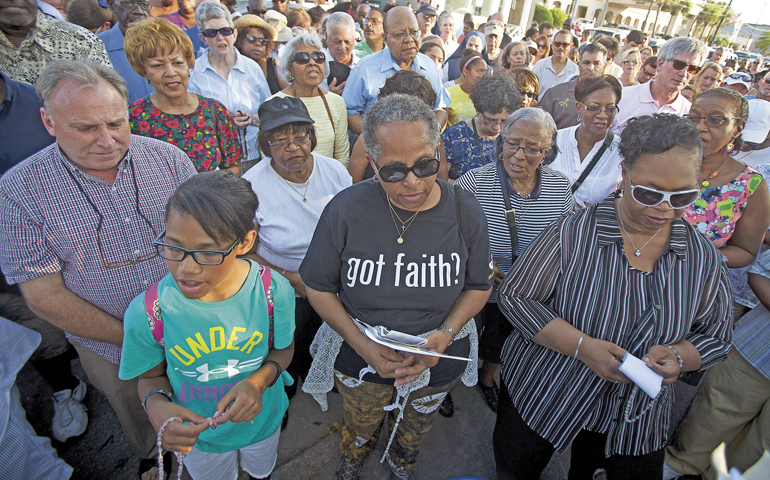 Like much of the country, I have been transfixed these past weeks by the tragedy unfolding in Charleston, S.C. First, I groaned with despair as blatant, violent racism held me in its icy grip. I, who grew up in the midst of civil rights marches, assassinations -- and hard-won victories, -- mourned the reality that despite our hundreds of thousands of chanting voices, black and white together, we have yet to overcome.

And then I was transfixed by the triumph of a faith community grieving mightily but not destroyed. A community that loved, mourned and miraculously forgave the man accused of the shooting, Dylann Roof. This community -- Mother Emanuel A.M.E. Church -- witnessed as powerfully as any second-century martyr that love is stronger than death, good more powerful than the worst evil imaginable, and that God's love is greater than human hatred.

It began on June 19, when family members of victims spoke directly to Roof via video feed at a bond hearing in Charleston. Again and again, they gave voice to their pain and, miraculously, their forgiveness. Nadine Collier, the daughter of one of the victims, church sexton Ethel Lance, said:

"You took something very precious away from me. I will never get to talk to her ever again. I will never be able to hold her again, but I forgive you, and have mercy on your soul."

Myra Thompson was a church trustee studying for the ministry herself when she was gunned down. A member of her family said this:

"I forgive him and my family forgives him. But we would like him to take this opportunity to repent. Repent. Confess. Give your life to the one who matters most: Christ. So that He can change him and change your ways, so no matter what happens to you, you'll be okay."

The sister of DePayne Middleton Doctor, a mother of four and anchor of the alto section, and Wanda Simmons, the granddaughter of retired pastor Daniel Simmons, both thanked the court for making sure hate doesn't win: "Although my grandfather and the other victims died at the hands of hate," Wanda Simmons said, "this is proof, everyone's plea for your soul, is proof that they lived in love and their legacies will live in love."

"I acknowledge that I am very angry. But one thing that DePayne always enjoined in our family ... is she taught me that we are the family that love built. We have no room for hating, so we have to forgive. I pray God on your soul."

I was also inspired by President Barack Obama's powerful eulogy honoring Clementa C. Pinckney, Mother Emanuel's pastor and a South Carolina state senator. Pinckney, he said, is one who "embodied the idea that our Christian faith demands deeds and not just words ... that to feed the hungry and clothe the naked and house the homeless is not just a call for isolated charity but the imperative of a just society."

While some commentators demanded accountability rather than what they saw as an early rush to forgiveness, most made a distinction between forgiveness, which allows victims to heal, and reconciliation, which requires accountability if right relationships are to be restored.

The tragic-triumph of Charleston has led to a nationwide discussion of signs and symbols, such as the Confederate flag and Southern Civil War generals that no longer commemorate Southern culture but feed into a dangerous white supremacist ideology.

And such supremacist thinking is a much tougher weed to pull out of our human garden than taking down a Confederate flag or finding a new museum home for a public statue. In fact, I would say it is probably impossible to overcome such hatred without recourse to love. For Christians, this would be the love of God in Jesus, who, by the way, first gained renown in Galilee for casting out demons of disease, cultic uncleanness and other systematized oppressions.

While I'm not always sure I believe in personified demons, I sure do believe in the power of evil in our world and yes, sorry to say, in myself, too. And that is the hard part. Because it looks as if young Dylann Roof may have had too little love in his life, perhaps creating a seed bed for horrendous choices, beginning with getting hooked on Internet hate sites.

And therein lie both the mystery and the wisdom of forgiveness. People like Dylann, you see, belong to our human family, too, even though they are deeply wounded and dangerous. And what are we as a human community to do about them? Do we believe God loves them, too? What kind of God could ever do that?

I guess the kind that Mother Emanuel church members believe in and witness to every day of their lives. So this is the very difficult conundrum about God. A God who can love even the worst humans among us. Humans like Adolf Hitler, Irma Grese or Pontius Pilate, for example.

I don't pretend to understand it. I only know that if God isn't a God who can love and transform even the most heinous of humans and bring good despite evil deeds, then evil has the last word and is in the end more powerful than God.

The folks at Mother Emanuel church know that is not true. And their witness is helping the rest of us believe it, too.

Here is a poem written by my lifelong friend Anne Finley Edwards that says in a few words what I just said in many. She inspires me to a wider love. I hope her words inspire our nation too.

You wrote a new constitution, today,
Article 2, was all about Forgive, and
Article 5, spoken to my frozen, fearing
heart, spoke, services shall be held,

Have you looked on them, have you
spent most precious minutes to gain
the Gift their wide and spirit eyes
shall never give again, to blood-

Bound kin, already the DeepHope
wide in those eyes, has spoken,
"Services (simply) will be held", and,
can we simply say, your life speaks,

Plain to me, we shall write a new
and shout-out Article, I, too, will
give a life to Bind your Freed and
unFeared church in christwide

arms, and I will Pledge America
to Thee.