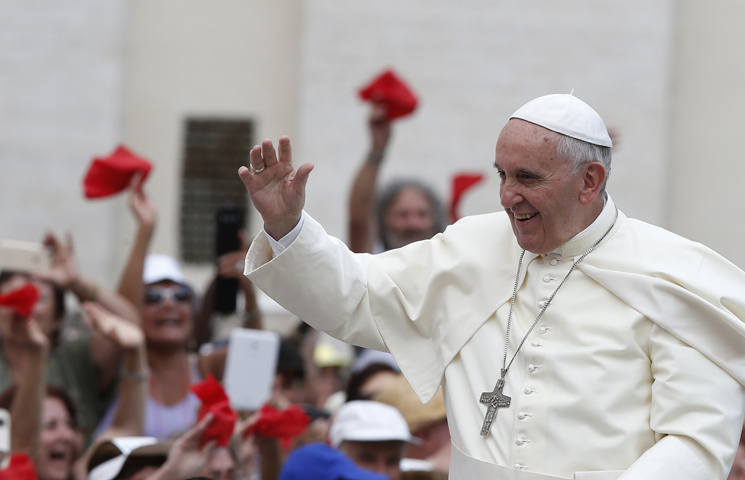 Pope Francis arrives to greet participants in the Renewal of the Spirit meeting in St. Peter's Square at the Vatican July 3. The meeting was with Catholics involved in the charismatic movement. (CNS photo/Paul Haring)

Last Saturday I returned from visiting friends in Philadelphia where city officials just announced massive new security measures for Pope Francis' late September visit. A new fence is being constructed that will surround large swaths of central city venues where the Pope will appear.

No automobiles are permitted, causing major inconvenience to residents and restaurant workers alike. Public transit tickets are only available by lottery and attendees are being warned to expect long walks and electronic screenings. All city schools and government offices will be closed.

Even though Philadelphians are among the most enthusiastic of Catholics, I wonder how much these major disruptions will dampen their fervor. While exhaustive security preparations are necessary in a post-9/11 world, they do tend to feed a distressing "papolatry" narrative -- idolization that Pope Francis deplores.

On the other hand, if any pope ever deserved to be acclaimed, Francis does.

Our pope is an unusually pastoral man who is passionate about the marginalized and wants us to use ecclesiastical wealth on their behalf.

But he is more than a pastor.

Francis is a remarkable combination of prophet and shrewd administrator -- characteristics seldom seen in one person -- let alone in one pope.

Within the church itself he challenges clerics to throw off extravagant ecclesiastical garb and aspire to "smell like the sheep."

His work to decentralize pastoral decision-making and empower local bishops' conferences evokes a new Magnificat moment of "casting the mighty from their thrones and raising up the lowly." (Lk 1: 46-56) This comes at a time when, arguably, more ecclesial power had been concentrated in the Vatican than at any other period of church history.

Yep, this is the stuff of prophetic "Word-of-the-Lord" idealism for sure.

But making those prophetic ideals actually come to pass is another matter.

Enter Francis, the shrewd administrator/organizer who so far has an impressive track record of shaking things up and making things happen.

Exhibit A is the long overdue cleanup of the Vatican bank. For centuries the bank secretly transferred funds, sometimes legitimately, for religious orders needing to bypass corrupt governments so their members could minister to poor and exploited people.

After September 11, the world's banks would no longer do business with any bank that was not transparent.

Yet the Vatican bank proved intransigent and resisted all reform. The Bank of Italy finally had to instruct all of its affiliates to get rid of Vatican accounts. On January 1, 2013, the German Deutsche Bank closed down every ATM machine and credit card terminal in Vatican City, resulting in a loss of €40,000 a day.

Pope Benedict had tried to reform the Vatican bank but was out maneuvered by self-serving, not to say rapacious, underlings. He resigned a few weeks after the Deutsche Bank debacle.

Enter Francis, elected with a mandate to clean up the bank by non-curial cardinals sick of infighting and corruption.

He began by cutting the extravagant €25,000 annual bonus paid to the bank's five supervisory cardinals. Then he brought in management consultants, including a Roman Catholic mother of seven, Elizabeth McCaul. A former superintendent of banks for New York State, McCaul had helped stabilize its banking industry after the 9/11 attacks.

A member of the U.S.-based Promontory financial group, McCaul flew 25 regulatory specialists to the Vatican with a goal of reviewing every single account. Consultants found multiple serious problems including ignorance of due diligence procedures, poor cash flow checks and obfuscation as to who really controlled many accounts.

After the financial experts made their recommendations, Francis appointed Australian Cardinal George Pell to overhaul Vatican finances. Pell had successfully revamped financial systems in both the Melbourne and Sidney archdioceses. He is also one of Francis' nine cardinal advisors.

Though given a great deal of power, Pell would be accountable to a supervisory council chaired by another member of Francis' cabinet, Cardinal Reinhard Marx, the Archbishop of Munich.

While Pell is a known conservative, Marx tends to the liberal side of things, testifying to Francis' unusual ability to both separate and balance power inside the Vatican.

Despite attempts to discredit Pell, (probably by disgruntled curial insiders) Francis has vigorously supported his reforms.

If the Vatican bank is Exhibit A, then Exhibit B is surely Laudato Si' -- Francis' courageous call to love and protect the earth in a time of devastating climate change.

Because of Laudato Si', U.S. dioceses and Catholic organizations are increasingly challenged to divest from billions of dollars they have invested in fossil fuels. A year ago, the Marianist-run University of Dayton promised to divest its holdings in fossil fuel companies. In June a student-led campaign convinced Georgetown University to announce it would no longer directly invest in coal companies.

The Archdiocese of Chicago recently told Reuters that it would review its $100 million investments in fossil fuels.

Ken Hackett, the US ambassador to the Vatican, believes President Obama's wide-ranging meeting with Francis in March 2014 may have provided added impetus to Obama's gutsy August 3rd decision to reduce carbon emissions by 32 percent from 2005 levels by 2030.

It is probably no coincidence that the Global Catholic Climate Movement (GCCM) was launched in the Philippines by Cardinal Luis Antonio Tagle on July 7 just three weeks after the Pope's encyclical, Laudato Si', was issued.

Tagle is a Francis favorite and somewhat of a rock star in his own right. The pope recently appointed him one of three co-presidents at this Fall's much discussed Synod on the Family.

The new GCCM climate initiative is a coalition of 140 Catholic organizations aiming to collect at least 1 million signatures prior to the United Nations' climate summit to be held in Paris this November. Pope Francis endorsed the petition campaign in May, when he met with movement representatives at the Vatican.

To coincide with Francis' announcement proclaiming September 1 as a "World Day of Prayer for the Care of Creation," the GCCM created activities and prayer services designed to educate and advocate. (Resources are available here.)

With the help of like-minded prelates-of-the-people like Tagle, Francis is now skillfully connecting with grassroots movements that support a top priority of his papacy.

Perhaps we should add "community organizer" to Francis's lengthening list of attributes.

Between the two of them, maybe we can inspire ordinary people all over this planet to praise and protect our beautiful home.