For I was a stranger and you welcomed me 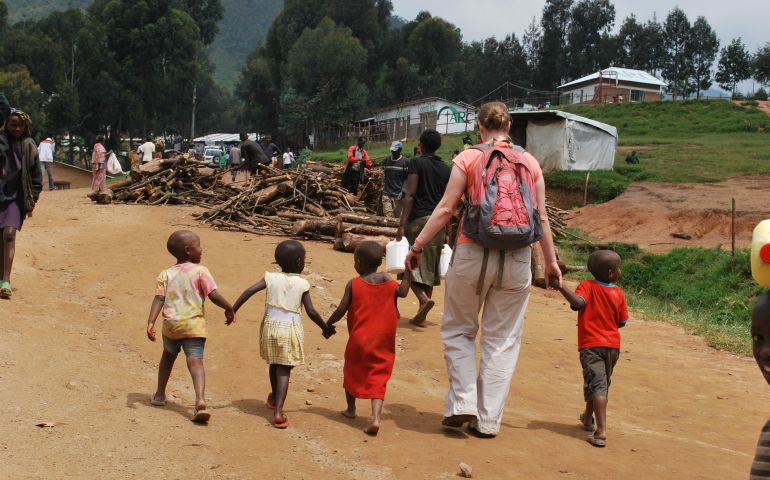 "I hope all those people who want immigrants, take them in themselves. When we run out of welfare and dip more into Social Security what will we all do then?"

This is from a Facebook post by a Catholic friend; it sums up what I suspect many people, some Trump supporters, believe about refugees and immigrants. It is one of several false narratives circulating about the hardworking, often highly educated people who were forced to flee persecution or death in their native lands.

Immigrants and refugees contribute far more to the U.S. economy than they take from it.

Eighteen professional organizations recently published a document debunking the anti-immigration stance. They cite a recent study from the American Enterprise Institute (not a liberal group by any measure) noting, "each immigrant to the U.S. helps create 4.6 jobs that benefit 'natives.' " In Cleveland, refugee resettlement has had a distinctly positive impact on our local economy, bringing in $50 million annually.

Last week, I attended an information night about refugee resettlement sponsored by Cleveland Catholic Charities. Our diocese is one of over 100 that worked to resettle more than one million refugees in the U.S. since 1975. This important witness to Christian and American values is now threatened because of Republican support for reducing legal refugees from the 110,000 approved by President Barack Obama, to only 50,000 proposed by President Donald Trump.

Here are some other facts that counter false narratives about immigrants and refugees:

But it is important to look beyond the facts and figures and contemplate the human face of immigration.

My friend, Sr. Erin MacDonald, has dedicated her life to serving refugees. In 2010, she began working with the Jesuit Refugee Services in the camps of central Africa.

"As a humanitarian aid worker, I ran my fingers through some of the most horrific wounds of humanity — and in the darkness of it all, I found God," Erin says simply.

"Paradoxically, in the midst of profound suffering, I had a personal and mystical experience of God and found the courage to move beyond my own fears to truly open my heart to loving God and neighbor without distinction."

In 2013, Erin entered the novitiate of my community, the Congregation of St. Joseph. Today she serves as a social worker at Freedom House, a Detroit crisis shelter for survivors of torture who are seeking asylum in the United States.

Many of the asylum seekers are educated professionals. They include a journalist who published a story exposing governmental injustice; a political campaign worker whose candidate lost; a judge who ruled against a dictator; a nurse who was arrested and imprisoned for no other reason than her ethnicity; and LGBT people who were tortured because of their orientation.

"Staying in their own country is no longer an option," says Erin. "Remaining in their homeland would most certainly mean unjust imprisonment, unbelievable torture and, quite possibly, death."

Although Freedom House has successfully served political refugees for over 32 years, after Trump was elected, the agency was notified that it would lose its funding from the department of Housing and Urban Development. The cut — which constitutes 60 percent of the organization's budget — came even though 93 percent of the agency's clients become self-sufficient within two years.

Coupled with the Republican administration's immigration crackdown, Freedom House residents now live in fear of being rounded up and deported to certain persecution and possible death.

When I asked Erin how she was coping, she replied that, professionally, it is difficult to absorb all the fear and sorrow from clients who "are terrified … they sit in my office and cry." Plus she anguishes when she must turn away new clients who have nowhere else to go.

Personally, she says, "It makes me embarrassed to be an American Christian."

As American Christians, we are obligated to love the stranger in our midst.

As American Christians, we care about displaced peoples not because it is good for our economy but because it is the prime directive of a God who loves everyone regardless of national boundaries.

Leviticus tells us: "You shall treat the alien who resides with you no differently than the natives born among you; you shall love the alien as yourself; for you too were once aliens… .  I, the Lord, am your God" (Leviticus 19:34).

Jesus tells us: "I was a stranger and you welcomed me, naked and you clothed me. I was ill, and you comforted me, in prison and you came to visit me. I assure you, as often as you did it for the least among you, you did it for me" (Matthew 25: 35-40).

For 2,000 years, this has been the constant teaching of our church.

This is why U.S. bishops consistently teach about our obligation to care for migrant populations even while calling for immigration reform. This is why Catholic bishops have publicly opposed Trump's ill-planned and horribly executed travel ban.

This is why Christians, indeed all people of good will, must resolutely oppose Trump's lesser known, but even more destructive order on deportations. Already in the process of being implemented, it could lead to mass deportations of 8 million people.

I call on our Catholic bishops to launch a high profile, national campaign to educate every U.S. parish about our obligation, as American Catholics, to welcome the stranger among us.

Is it time for each of us, like Erin, to move beyond our own fears and embrace the God dwelling within this suffering people?

Justice | For I was a stranger and you welcomed me