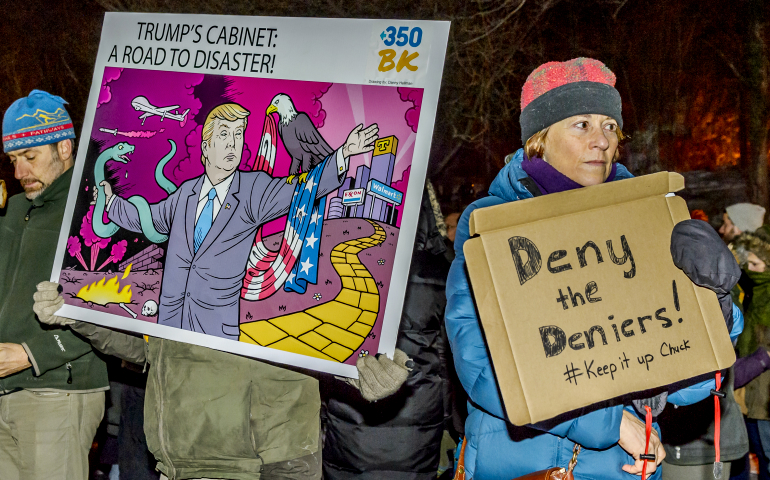 Along with many Americans, I watched in dismay as President-elect Donald Trump put forward one controversial nominee after another for key posts in his administration.

Scott Pruitt, a known climate-change denier, was nominated to head the Environmental Protection Agency. As attorney general in oil-rich Oklahoma, Pruitt sued the very agency he will now try to dismantle.

Ben Carson was nominated to head the Department of Housing and Urban Development. He has no prior experience governing large bureaucracies and philosophically opposes government programs he believes encourage "dependency," and engage in "social engineering."

Tom Price, who hates the Affordable Care Act and wants to privatize Medicare, has been nominated to lead the Department of Health and Human Services. Except that might not happen because The Wall Street Journal reports that Price traded more than $300,000 in shares of health-related companies while sponsoring legislation related to those very businesses. It's called insider trading.

Democrats are calling for Price to be investigated by the Office of Congressional Ethics. Yes, the very group that House Republicans — in a secret session — voted to eliminate, only to reverse themselves after receiving "a blizzard" of calls from angry constituents.

You can't make this stuff up.

Rather than draining the swamp, the Trumpsters are digging a deluxe version.

They are ably abetted by the frenzied attempts of overwrought Republicans to immediately — like yesterday — repeal the Affordable Care Act with no plan to replace it, leaving 20 million people without health insurance.

This not only blows a trillion-dollar hole in the U.S. deficit, it goes against the wishes of 75 percent of the American people who oppose repealing the act without replacing it. Oh, and did I mention projections that a repeal will lead to the loss of 2.6 million jobs?

And we haven't gotten to the Russian hacking of our election and Trump's nomination of ExxonMobil CEO and billionaire Rex Tillerson to become secretary of state despite his deep ties to the Russian oil industry.

Am I the only one to suspect that Russia might have more than a passing interest in lifting U.S. sanctions banning Exxon's sharing of offshore and shale oil technology? At a 2014 Exxon annual meeting, Tillerson publicly opposed U.S. sanctions, and many assume Trump will drop them.

Trump's proposed gutting of environmental protections and threats to back off the Paris Accord can only help big oil. With a Tillerson appointment, U.S. foreign policy may no longer be about making the world safe for democracy — but about blatantly exploiting it for oil and gas.

This does not bode well for the future of our planet, let alone our country.

Where is the concern for the common good?

Is compassionate conservatism still a value for the new Republican majority? Or will their blind rush to power punish the very people who put them into office?

It is all so overwhelming.

I'm so proud of the National Council of Churches, which issued a statement expressing "grave concerns" about Trump's "objectionable nominees" and called on him to enact "a policy agenda that will improve the lives of the most vulnerable, not put them at greater risk." The organization represents 45 million people in 100,000 U.S. Protestant congregations.

When will our Catholic bishops issue a similar statement? Or will they remain silent in the face of the greatest assault on the common good that I have seen in my lifetime?

It is easy to be discouraged, but, in the end, that is the coward's way out.

It is up to us, as Catholics, to defend human dignity and the social safety nets that support everyone, especially the least among us.

I take heart in remembering that the majority of Americans voted for a different set of values than those reflected by Trump and his appointees. Those values haven't gone away. They are still embedded in our citizenry. Now we must organize to defend both our values and our citizens.

In the Lord's Prayer, Jesus asks that God's reign of peace, justice, and right relationship come "on earth, as it is in heaven."

The prayer also asks not to be led into temptation. One translation of this is "Do not put us to the test." I submit that as Christians we are now being put to the test.

Will we stand and defend the values that make us Christian or will we decide it is just too much trouble?

Below are links to faith-based groups working to support the common good in these troubled times. Please click on a link and get involved.

I think it's what Jesus would do.