'Love is Blind. Obedience Shouldn't Be.' 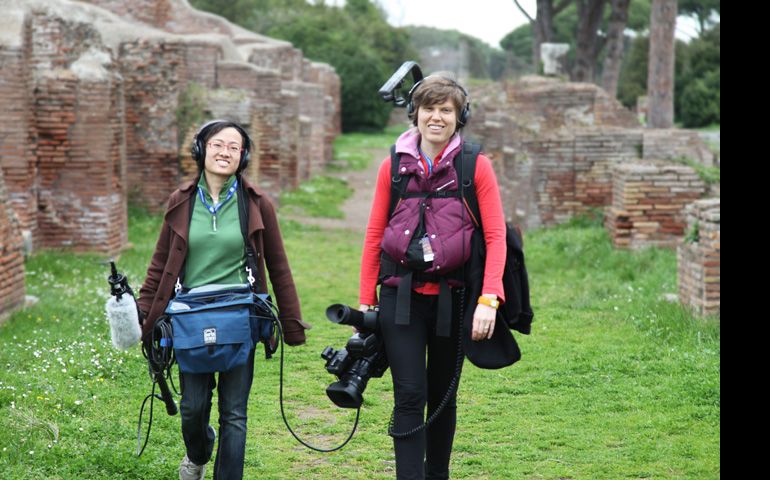 Director Rebecca Parrish (right) and audio person Shuling Yong (Left) in Ostia, a historic site near Rome that has evidence of women leaders in the early Church. The crew filmed Sr. Chris Schenk’s as she lead a pilgrimage to these sites and also captured the announcement of Pope Francis as the new pope. (www.radicalgracefilm.com)

For the past several months I've been attending various film festivals in the U.S. and Canada in support of the award-winning documentary Radical Grace. I am one of three sisters the film tracks as we traversed the scary terrain of the "nunquisition" -- the Vatican's six year investigation of U.S. sisters that finally ended favorably for us last spring.

Director Rebecca Parrish hopes her remarkable film will inspire others to work for justice in their own venues. A self-described "agnostic and seeker," Rebecca is fascinated by the intersection of spirituality and justice. Her creative vision resulted in a film that inspires even as it makes people laugh -- and then it makes them think.

Rebecca* works with a non profit organization, the Kindling Group, that is encouraging activists and others to sponsor local screenings of Radical Grace in hopes of sparking discussion about justice and spirituality. So when she asks me to come to one film festival or another, I show up if I possibly can.

Still, I confess to not a little anxiety when first faced with the prospect of viewing my wrinkly face and generous curves on the big screen. Gulp. But guess what? Nobody noticed or even cared. That's because the film is bigger than any one of its sister-subjects in the depth of its content and the breadth of its vision.

Sr. Jean Hughes is an Adrian Dominican who worked with formerly incarcerated men at St. Leonard's House in Chicago. She is, in many ways, the heart of the film. She speaks blunt truths that are funny and as profound as they are down to earth. "Get some good women who are your friends and not just your lovers," she advises her charges. "If she needs diamonds drop her!"

For Jean, God is emphatically not "an old white guy with a beard" but the "impetus for good" in our world. She dismisses praise from her clients saying: "If they only knew what this does for me. How do you tell someone that you are my sacred moment?"

Among the most touching segments is footage of Simone and her sisters on the bus when news breaks that the Supreme Court upheld the Affordable Care Act. "We did it," exults a stunned Simone: "Holy Moly, I can't believe we did it.  This is huge." Aside from being eloquent (and colorful) in her defense of the poor, Simone is shrewd in her analysis of Vatican politics:

"There's a huge struggle in Rome right now between the rule obeyers -- those who want to manage by rules -- and Francis, who wants a more open, welcoming and inclusive process."

My part focuses on raising up women's leadership in the church and catalyzing an outpouring of lay support for beleaguered sisters alongside other reform groups in the Nun Justice Project.

When word came in February 2013 that Pope Benedict would resign, plans were already in place for Rebecca and her crew to film FutureChurch's March pilgrimage to Rome sites of women leaders in the early church.

And so it was that I found myself in St. Peter's Square -- camera rolling and fighting tears -- as a simply dressed Francis bowed low to receive the blessing of everyone present.

Some would call this providential timing a coincidence. I call it the Holy Spirit.

But it would be many months, more criticism from a recalcitrant Vatican office, and scores of uplifting lay-led prayer vigils, before justice for the sisters would prevail. Along the way Rebecca's talented team tracked Jean, Simone and me as we groaned, prayed, strategized and struggled to find a modicum of inner peace while the Vatican fiddled its way forward.

As I watch audiences respond to our story with laughter, tears and thoughtful silence, I feel humbled and privileged to have been part of what turned out to be a "radically graced" enterprise in and of itself.

As Rebecca hoped, the film has attracted a great deal of positive recognition. It won audience choice awards at film festivals in Toronto and Washington DC, and most recently, the Chicago Award at that city's film festival. I was amazed that Radical Grace aired in South Korea at the 2015 Film Festival for Women's Rights. Another screening is planned for an upcoming women's festival in Croatia.

When I wondered how these far flung venues had heard about the film, producer Nicole Bernardi-Reis told me that international feminist festivals track documentaries like Radical Grace because,  ". . . [T]he nuns are role models -- not only the work but simply advocating for yourselves is a radical and affirming idea for women in many parts of the world."

This week at Chicago's Gene Siskel theater, the Radical Grace team sponsored diverse panels after each of eight screenings about "Faith and Feminism," "Christian and Islamic Feminisms" and "Living a Calling to Act for Justice." Here I learned that struggling Muslim women also take heart from our story. Nadiah Mohajir told the audience that, like the nuns, she too consciously chose to work from within to change her own tradition. Nadia cofounded Heart, a Muslim organization that helps women and girls learn about the gift of their sexuality. I will write about her work in a future column.

Many people have told me they never really considered staying inside and working to change the church (or any other unjust structure) rather than depart in despair. I hope we inspire folks to stay and work for positive change especially now that Catholics at least, have a Pope who is actively seeking change.

As the film promo says: "Love is blind. Obedience shouldn't be."

You have created a luminous gift that keeps on giving.

*An earlier version of this post incorrectly stated that the Kindling Group belonged to Rebecca Parrish.

A 'Sundance virgin' on her first few films

Carole King's 'Tapestry' remains a masterpiece 50 years after its release