Magdala celebrations heal long-buried misogyny -- but will our daughters care? 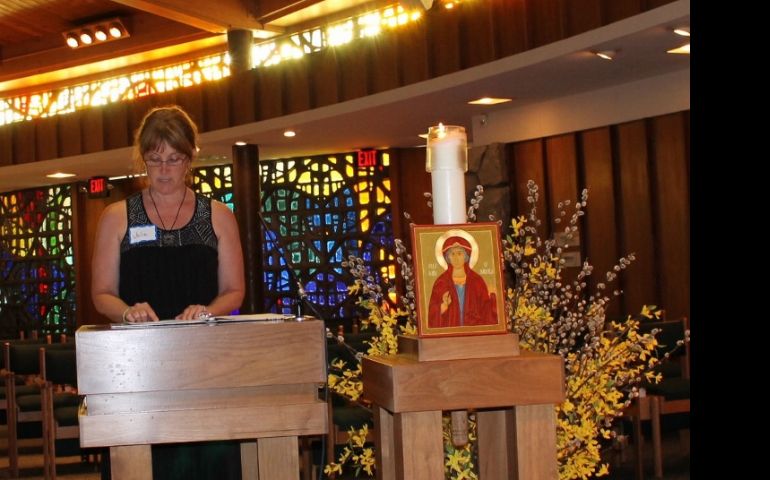 A woman leads a St. Mary of Magdala prayer service held at a Michigan parish in 201.2 (Courtesy of FutureChurch)

To say I was thrilled when the Vatican upgraded the celebration of St. Mary of Magdala to a feast on par with those of the other apostles doesn't nearly begin to cover it.

On June 10 Archbishop Arthur Roche, the Secretary of the Congregation for Divine Worship said:

St. Mary of Magdala, the statement says, "has the honor of being the 'prima testis' [first witness] of the Lord's Resurrection. ... [and] Precisely because she was an eyewitness of the Risen Christ, she was also, on the other hand, the first to bear witness to him to the Apostles."

I'm not sure if most of us realize just how big of a deal it is to have the Vatican say St. Mary of Magdala was not a prostitute but an apostle in her own right, and the first to witness Jesus' Resurrection.

Oh, you didn't see the "not a prostitute" part?

Well it's there, but obliquely concealed by some tactful backtracking from Pope Gregory's disastrous sixth-century sermon that combined three New Testament women -- Mary of Bethany, Mary of Magdala and the female "public sinner" who washed Jesus' feet with her tears -- into one big time woman-sinner-prostitute.

This biblical female Frankenstein's monster was, of course, forgiven by homily's end -- but not before inflicting great damage to the historical memory of Jesus' faithful women disciples. And, I believe, to the religious psyches of women down to the present day.

Thus began a long and destructive tradition in the west of remembering St. Mary of Magdala as a prostitute rather than the first witness to the Resurrection. Thankfully, the Eastern church never adopted the "forgiven prostitute" slur but always honored her as the "apostle to the apostles."

The Vatican's June 10 statement never quite says that Pope Gregory (and succeeding churchmen) got it wrong. Instead it alludes to work done by the Bollandists, a Jesuit group renowned for research into the lives of the saints, who "made a detailed study of the problem of identifying these three women and prepared a path for the liturgical reform of the Roman Calendar."

Did you get it yet?

I'm guessing not. That is because you have to fill in the blanks with one more obscure fact. The 1969 reform quietly changed the July 22 Gospel reading for St. Mary of Magdala's commemoration from the one about the "sinful woman at Simon's house who loved much" (Luke 7: 36-50) to Jesus' Easter appearance to Magdalene and her subsequent apostolic commissioning (John 20:1-2, 11-18).

But did a Vatican office or official ever tell anyone? Were there any public announcements such as, "Hey folks, St. Mary of Magdala wasn't a prostitute after all. We got that one wrong and now we're making it right."

So who knew? Basically no one knew except for the Scripture scholars.

And I thank God for them.

I thank God for my teacher, Fr. George Smiga, who, in the early 1990s taught a class on feminist biblical interpretation at our local seminary and spelled it out for us. (This was when you could still discuss such things at a diocesan seminary. Let's hope we'll be able to discuss them again soon.)

I was appalled to discover there is no evidence whatsoever that Mary of Magdala was a prostitute but ample evidence in all four Gospels that she was the first witness to the Resurrection. And I vowed to let people know who she really was somehow.

Enter God's inscrutable providence. In 1997, as director at FutureChurch, it gave me great peace of heart to at last fulfill my vow by launching a national campaign to restore St. Mary of Magdala to her rightful place as the apostle to the apostles.

We asked our supporters to sponsor special celebrations on or around July 22 at which a biblical expert would trace Mary's unparalleled fidelity in accompanying Jesus through crucifixion, death, burial and resurrection. This would be followed by a prayer service at which a woman would preside, preach and encourage attendees to reflect on their own encounters with, and witness to, the risen Christ.

Our first Cleveland celebration attracted 200 people to a local parish where Fr. Smiga spoke. A friend encouraged about eight women from her 12-step group to attend. To my surprise, they wept unrestrainedly throughout the prayer service that was created and led by pastoral minister, Laurel Jurecki, who was clothed in a white alb.

It dawned on me then that we were touching something very deep within the Catholic female psyche. A long-buried wound was slowly being brought to the Spirit's healing light.

Annual celebrations of St. Mary of Magdala completely exploded after that, going from 23 that first year, to 150 the following year to between 250 to 400 celebrations worldwide in each of the last 17 years. Every summer, thousands of women and men helped correct an egregious injustice done to a great woman leader in our church.

Along the way they also worked to correct present day injustices by committing to write, educate and advocate for reinstating female deacons, restoring deleted women to lectionary texts, encouraging women preachers and standing up for Catholic nuns under fire from Rome.

This year FutureChurch has created a celebration around the theme of building a church for our daughters with user friendly resources designed for parishes, schools, private homes and small faith communities. The initiative comes not a moment too soon because according to current research:  "Unlike their grandmothers and mothers, Catholic women born after Vatican II seem less willing to give the institutional church the benefit of the doubt and to stay loyal to the Church and Catholicism while hoping for change" (D'Antonio, Dillon and Gautier in American Catholics in Transition, pp. 96-97).

There is much to celebrate this July 22. The Vatican finally gets it that St. Mary of Magdala is an apostolic model in our Church on par with the male apostles.

But will our daughters even care?

Or will they walk away sad because they simply won't sit in a pew and allow themselves to be disrespected as their mothers and grandmothers have been.

This is where the Holy Spirit comes in to do her thing.

But She needs our help.

Check out this new A Church for our Daughters campaign sponsored by over 30 church reform organizations and download a St. Mary of Magdala celebration and involve younger women.

And do it today.

Celia Wexler explores women's struggles to be feminist and Catholic

Broader representation of women in church is a process, cardinal says