Police force should be guardians, not warriors 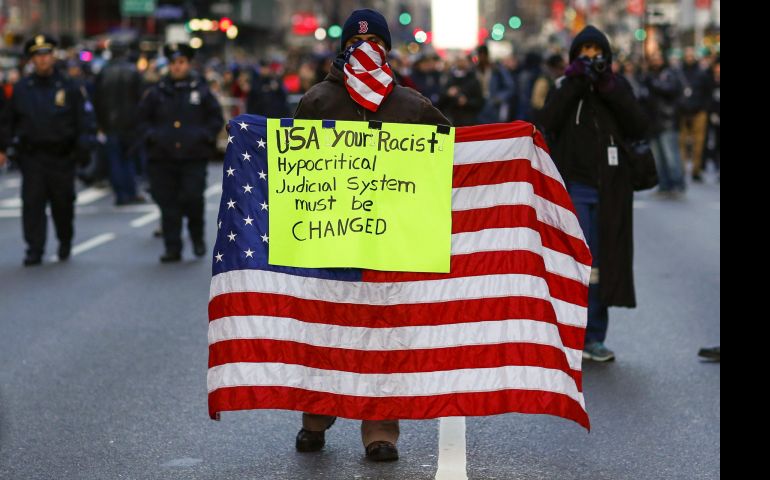 A man takes part in a march in New York Dec. 13, 2014, calling for changes in the criminal justice system. (CNS/Reuters/Eduardo Munoz)

Since my last column on the police misconduct quagmire, I've been thinking about all the good cops out there. You know, the ones who don't use excessive force but who put themselves in harm's way every single day to protect the public.

This has got to be a very tough time for them.

While I've never been much of a "cops and robbers" fan, lately I find myself fascinated by the television program Blue Bloods. Even given the improbable narrative structure featuring a police commissioner, prosecuting attorney, detective, beat cop and retired police commissioner all in the same family, the show provides vicarious access to the complexity and ambiguity of crime and punishment as seen from diverse vantage points. (At least the vantage points of those delegated to uphold order and protect the public. I wonder if we will ever see a TV series about how poor families in crime-ridden neighborhoods view law enforcement.) One program dealt sensitively with forgiveness for ex-offenders. Another focused on a wrenching story of a cop being shunned by her fellow officers because she wouldn't lie about a partner's excessive use of force.

But my appreciation for good cops and the complicated challenges they face doesn't come from TV dramas. I have had personal experience of above-and-beyond-the-call-of-duty police work in my own life. In 1984, a midwife colleague of mine was raped and murdered in her home. As luck (or providence) would have it, I was the midwife on duty when "Carolyn" didn't show up for her scheduled shift. She was a very conscientious midwife who worshipped at my parish. She was never late for work.

Receiving no response to my telephone calls, I drove over to Carolyn's home only to find her car in the driveway, no answer to the doorbell, and all the doors locked. So I called her brother "Matthew." As I waited for him to drive across town, I remember praying to Carolyn that if she was dead, (I had a very bad feeling since her duplex home wasn’t in the safest of neighborhoods) to help us deal with it.

Back in my single days before I became a nun, Carolyn and I occasionally went clubbing together. One time she was interacting with a guy who eventually admitted he was married. Without missing a beat, Carolyn encouraged him to seek out Marriage Encounter, a Catholic retreat program designed to help couples stay together. That's just the kind of person she was. I was completely disgusted by the dude but not Carolyn. She just tried to help him.

When Matthew arrived, we entered and reluctantly climbed the stairs to Carolyn's bedroom. As I had feared, we found her naked, abused body lying face down on the bed. Numb with shock and horror, I softly covered her up and then Matthew and I prayed together. An odd peacefulness seemed to permeate the room despite recent unspeakable violence.

Matthew called the police and they arrived almost immediately. I was extremely traumatized by this violent assault to my friend and very grateful for the female police officer who gently guided me through painful questions she had to ask. I felt safer with her around.

And so began a long investigation involving many more questions over days, weeks and months.

But first, I worked with Matthew and with Carolyn's family to plan her wake and funeral. It was comforting to facilitate the only consolation I, or anyone, could offer -- trust in a suffering-love God even when the worst thing imaginable happens.

Witnessing the aftermath of Carolyn's violent death left me vulnerable and frightened. In my pre-sisterhood days, I too lived alone in a duplex, although my neighborhood was a bit safer. That Sunday, I was grateful to begin my weeklong stint on the night shift. I was afraid to sleep at home.

On Monday night, a senior detective, "Joseph," came to interview me at work. He was doing his job, but you could tell that, for him, it was more than a job. Joseph was professional and compassionate. When the interview was over, I asked him fearfully if I was at risk. (My name had been in the newspapers talking about what a great midwife Carolyn had been). He didn't give me a pat answer. Instead, he came to my house the next afternoon, made sure it was secure, and then scoped out my neighborhood. Over the next several weeks, he made a point of checking in regularly to see how I was doing. I will never forget his kindness.

After exhaustive investigative work by a team of detectives, a Caucasian man was arrested, tried and convicted of Carolyn's rape and murder.  He was a former painter she had once hired to work on her home.

Our officers have been trained to survive, to be prepared, to go out in our neighborhoods as if they are in the military. We want our officers to be safe and vigilant and able to protect our community and themselves. But we have changed that philosophy from being a warrior . . . to being a guardian.

I am blessed to have experienced two police guardians first hand.

Good police are indispensable in protecting the public, yet we often take them for granted.

There is no question that the military philosophy of treating citizens as enemy combatants has resulted in an unacceptable "shoot first and ask questions later" mentality that violates our civil liberties. That racial profiling is often involved makes this mentality even more egregious.

Still, it is easy for those of us who don't face potentially violent situations every day of our lives to condemn those who snap under the pressures of their work.

We must pray for our law enforcement officials as well as for the victims of excessive use of force.

Black lives matter. And so do those of our men and women in blue.

Justice | Police force should be guardians, not warriors

Harriet Tubman takes her place on $20 bills at Boston church

Nuns on the Bus 2016: Lemonade ministry

Waiting in the belly of a whale