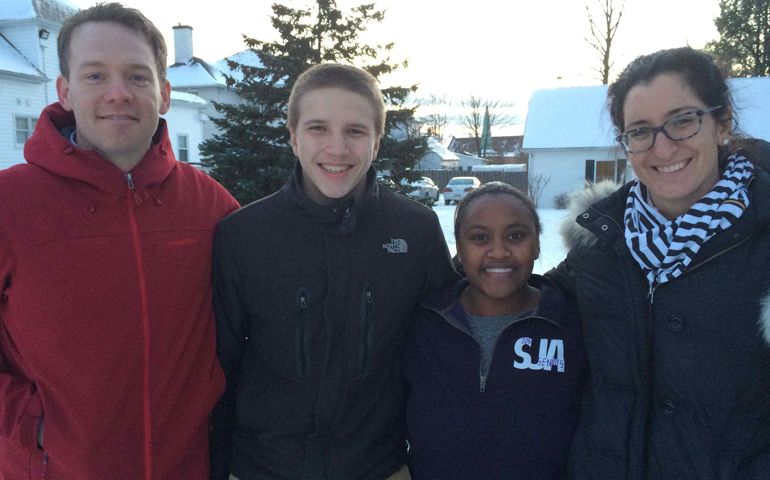 Every once in a while I get discouraged about where things are going in this country. Especially during election cycles, when certain politicians (who shall not be named) bombastically blame the poor for their plight.

Inevitably something happens to drag me out of my "ain't it awful" doldrums. This year, it was the dedicated work of my friend, Tim Grady, and the gifted young scholars he serves as executive director of Boys Hope Girls Hope (BHGH) of Northeastern Ohio.

(Full disclosure: I've known Tim since he was a child. He's the son of my lifetime friend and college roommate, Mary Ellen (Rodenhouse) Grady and her husband David. Together they birthed six beautiful children.)

Tim was just 14 when his dad died of kidney cancer at age 47. Despite dying so young, David gave more fatherly love and parenting to his six children than many receive in a lifetime. I suspect the tough circumstances of losing his father so early, and the unwavering love and strong faith of his mother, gave Tim a heart highly attuned to struggling youngsters. (His Catholic education at St. Ignatius High School and Villanova University didn't hurt either.)

After college, Tim returned to Cleveland to serve as the director of the Arrupe Neighborhood Partnership, a highly regarded neighborhood outreach program of St. Ignatius High School.

One day, one of Tim's staff members came in discouraged about the tough home situation of "Joseph," a gifted sixth grader. "This isn't fair -- Joseph's aunt doesn't care about him. She gets shoes and clothes for her children but nothing for him," the teacher told him.

Tim tried to comfort her but when he went home, he couldn't get Joseph off his mind. His wife, Keri, who taught at St. Martin DePorres (a Cristo Rey school), suggested he contact Boys Hope Girls Hope.

It was here that Joseph found the supportive environment he needed. He eventually enrolled in one of seven local Catholic high schools with the hope of attending college.

It was also here that Tim met a dynamic but aging director, Anne O' Donnell, who quickly and relentlessly pursued him to replace her as executive director.

O'Donnell had spearheaded the organization's Garfield Heights, Ohio, expansion, using some of her own funds to purchase, remodel and decorate the campus's three homes (two for boys and one for girls) with high quality furnishings. "These children deserve the best," she would say.

In March 2009, O'Donnell unexpectedly died in her sleep, but her hopes were fulfilled when Tim Grady was hired as Program Director in May 2009, and became executive director in July 2012.

When I visited BHGH in January, I met two residential scholars, James Taylor and Kenya Arrington. James is currently a senior at Walsh Jesuit High School with a 3.986 grade point average. James wants to major in political science at one of the nine colleges to which he has applied.

James said BHGH "really opened up a door to me that would not have been in the realm of possibility … I began seeing the world in a different way."

Kenya Arrington is a senior at my own Congregation's St. Joseph Academy in Cleveland.

"I love it there," she told me. "It's the community -- everyone is so loving -- they are there for you. They really care about your education."

Kenya was encouraged to become part of the BHGH residential program after she decided to repeat eight grade to improve her grades enough to get into a Catholic high school: "It was hard at first and I talked with my mother every single night … but our relationship actually grew after I moved here." She wants to be a nurse and has applied to three colleges.

"Kids that come into our care experience extreme chaos and some violence in their formative years," Tim told me. "When they enter early adolescence, role models can be particularly hard to come by. The odds of our scholars learning values like what it means to have dinner together around a table and interact in community become slim."

In 2007, the BHGH board began asking itself if they couldn't do more: "Could we translate our mission to create a non-residential program model and increase our impact?" Tim related.

Soon, the community-based "Hope Prep Academy Program" was born. It now serves 135 children, grades 6-12 -- as well as 16 college students -- throughout Northeast Ohio. When on campus community scholars enjoy a home-cooked meal around the dinner table, and interact with staff and with one another. Special mealtime interaction reinforces good values and future-focused goal setting for scholars.

All scholars -- whether residential or community -- are referred by teachers and guidance counselors in public, parochial, and charter schools, and must meet certain requirements. They must:

Community scholars also need a person who is a point of stability in their lives, "someone who will be their champion," says Tim. If a student has no such person or if there is chronic chaos or instability in the family, the student is invited to consider residential status.

So the next time some lame politician tries to tell you the poor have only themselves to blame, send them to the Boys Hope Girls Hope Northeastern Ohio website and challenge them to donate or volunteer.

And while you're there, maybe you can help out too!

Compassion can transform our society