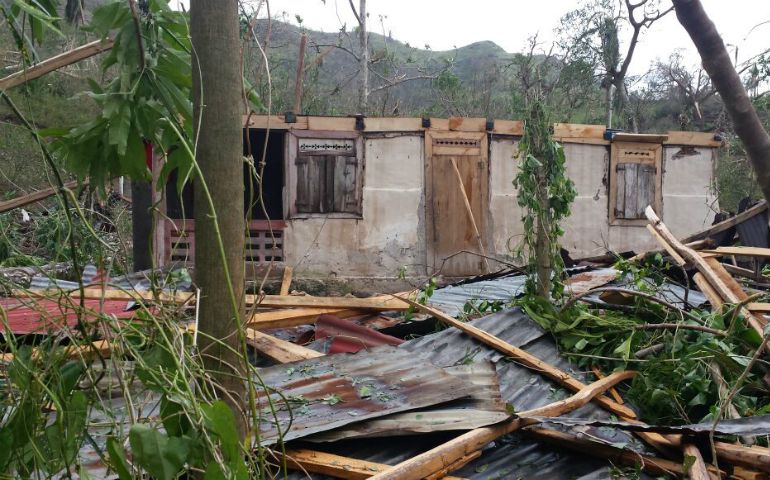 I originally intended to devote this column to troubling developments in the presidential campaign, but after Sunday Mass I changed my mind.

"We are here but our country is broken," wrote Francois about the devastation wrought by Hurricane Matthew on Oct. 4. Francois is president of Kafe de Baraderes (KDB) a small coffee growers association, one of several projects supported by Blessed Trinity parishioners.

Baraderes is in the hardest hit region of Haiti. It is accessible only via a rocky dirt road that, like the town, is vulnerable to flooding. Subsistence farming barely sustains the local economy that was given a small boost by a new coffee growers association created in 2008.

"All but one grower has lost their house; they have lost all their animals and most of their trees." Losing their animals, "every single one," is devastating, said Francois, because "this is their source of food and livelihood."

Fr. Doug asked his struggling city parish to dig deep:  "If you have only enough money for the parish collection, give it to the second collection for Haiti instead," he requested.

"We have a roof, we have our lives, and we'll survive."

Blessed Trinity began their mission to Baraderes about six years ago with a special project geared to helping women who have no access to the work force. "As usual the women suffer because men have a better chance of finding odd jobs such as construction," said Father Doug.

So the parish hired a professional tailor and began a school that teaches women to sew and embroider. Several years ago, parishioners personally delivered 10 brand-new sewing machines.

A special cooking and food presentation class helps women develop skills for the restaurant business. The parish works closely with the Little Sisters of Therese of the Child Jesus who serve in the area. One of the sisters teaches chef mastery and cuisine. Blessed Trinity also helped dig two wells for clean water and purchased solar panels to alleviate all-too-frequent power failures.

Over the past five years about 20 parishioners have visited Baraderes, including Father Doug. An annual benefit dinner and silent auction help to raise money for the growing ministry.

But the coffee plants, the sewing machines, the generator, and the solar panels were almost certainly destroyed by the hurricane, and the wells may be contaminated too. Cholera is an ever-present menace.

I asked Father Doug why his low-income parish began the Haiti mission when the parish itself has so little. This is what he said:

'So little' is a relative term. By comparison, we are rich. We have food, shelter, water, clothing, roads, airports, libraries, cell phones, television, and computers. They have nothing. Plus, we are all networked. Here if someone is hungry we have a neighbor or the government or the church to help us. Haiti has no food program and nothing like our FEMA [Federal Emergency Management Agency]. The church in Haiti is also poor.

An estimated 470 people from the districts surrounding Baraderes have died, which is nearly half of the estimated 1,000 hurricane-related deaths in Haiti. 1.4 million of the country's already desperately poor people need assistance. Sixty thousand are homeless in the worst natural disaster since an earthquake hit the island in 2010. In some areas people are crammed 100 to a classroom in makeshift school shelters.

Oct. 10, U.N. Secretary General Ban Ki-moon said a "massive response" is needed to help Haiti recover. He made an emergency appeal for nearly $120 million to help provide "life-saving assistance and protection" for the 750,000 people in southwestern Haiti where Baraderes is located. According to Haiti's ambassador to the United Nations, the southwestern region is "considered the bread basket of Haiti," and the country "faces a severe famine" until it recovers.

To get the Baraderes mission back on its feet, Father Doug suggests financial donations for building materials, new coffee plants, livestock, and clean water.

Just Haiti, a Washington, D.C.-based organization that works with subsistence coffee growers to market fair trade, coffee in the U.S. is accepting donations. The organization promises "100 percent of your donations will be earmarked for direct relief . . . . [T]he growers' associations will work within their communities to organize reforestation, replanting of crops and other projects to help Haitians get back on their feet."

I happen to know that Father Doug sometimes agonizes over how he will pay parish bills. When I praised his courageous decision after Mass, he just shrugged it off, "It is a complete no-brainer. We had to help."

When the collection was counted Blessed Trinity parishioners had given $4,800 to help their Haitian sisters and brothers. In doing so, they generously fulfilled Pope John Paul II's 1979 admonition:

The poor of the United States and of the world are your brothers and sisters in Christ. You must never be content to leave them just the crumbs from the feast. You must take of your substance, and not just of your abundance, in order to help them.*

To learn how you can further assist those in Haiti, you can visit the website of Catholic Relief Services.

The people of Haiti bless you -- and so do I!

* Homily given to 80,000-plus people at a Mass in Yankee Stadium

Environmental vulnerabilities are linked to every other problem in Haiti