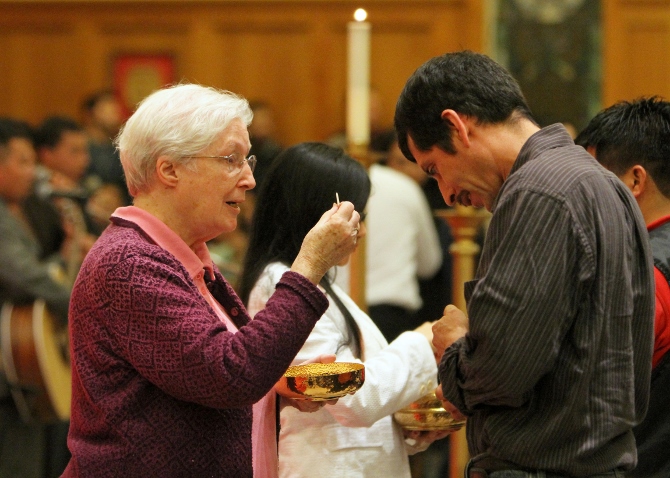 Sr. Margaret Smyth, director of the Riverhead, N.Y.-based North Fork Spanish Apostolate, distributes Communion during a Spanish-language Mass in January at St. John the Evangelist Church in Riverhead. Smyth, 75, a member of the Sisters of St. Dominic of Amityville, N.Y., has ministered to Latino immigrants on Long Island's East End since 1997. (CNS photo/Gregory A. Shemitz)

Like many of you, I have been following the Synod of Bishops on the family with more than usual interest.

Despite early accusations from conservatives that the synod was rigged, it saw the most open exchange of differing perspectives of any synod in recent memory. This resulted in "huge support" for Pope Francis among bishops and bodes well for a healthier, more pastorally effective church.

I am delighted that the synod advised use of the "internal forum" in pastoral decision making about fuller participation of the divorced and remarried in Catholic life. The internal forum relies on priests working privately with individuals to discern the extent to which the "external forum" ideal of church law applies to their subjective situations.

Propositions 84, 85 and 86, while never actually using the word "Communion," open a way for divorced and remarried Catholics to return to receiving the Eucharist. Proposition 85 cites an encyclical by Pope St. John Paul II, Familiaris Consortio, as well as the Pontifical Council for Legislative Texts and past teachings of the church. It says, "The judgment on an objective situation must not lead to a judgment on 'subjective guilt." Further it says, "While upholding the general norm, it's necessary to recognize that the responsibility for certain actions or decisions is not the same in all cases," and that, "Pastoral discernment, taking account of the correctly formed consciences of people, must take up these situations."

Several prelates have confirmed that the synod supported opening a pathway for the divorced and remarried to return to the sacraments.

Of course, Pope Francis has the final word, but as anyone who has been paying attention realizes, his heart is set on the mercy of God rather than judgment.

The synod fathers have now handed him the two-thirds consensus he needs to nuance pastoral practice regarding divorced and remarried Catholics. Note I did not say to change doctrine. The doctrinal ideal of life-long married commitment remains the same. But the pastoral application can and should take into account the complex circumstances of individual believers.

And all of this is important why? Because people -- especially hurting people -- are beloved of God and the privileged place of divine compassion.

I am grateful that the German bishops raised the "internal forum" proposal at the synod. That they did so with the support of Cardinal Gerhard Müller, the conservative Prefect of the Congregation for the Doctrine of the Faith, is nothing short of miraculous. Still, the "internal forum" path is not really new. I know a number of U.S. priests who invoked it frequently while accompanying people in complex situations.

I have two friends, both nurses, who suffered greatly over loss of the sacraments when they remarried after a painful divorce. Their stories are as heartbreaking as they are instructive.

"Jane" is a dedicated nurse midwife who married at a young age, raised several children and later divorced. She fell in love with a physician with whom she worked and later married him. Theirs was an unusually happy union.

Jane grew up in the proverbial school of hard knocks, but her Catholic faith was always an important support. I knew she loved God but I had no idea how much she suffered from not being able to receive Communion until one day, with many tears, she told me about it. I suggested she speak to a priest I knew to be a skilled spiritual director and told her about the "internal forum."

Several months later we both attended the funeral of the young son of a beloved physician colleague. Before Mass, someone announced there was a need for Communion ministers, so I volunteered. While distributing Communion, I looked up and there was Jane, eyes streaming and hands outstretched to receive the Body of the Christ she loved so well. It was the first time she had received Communion in 20 years. I still get pretty choked up thinking about it.

My other friend, "Joyce," is a college chum from nursing school days who had undergone a painful divorce and later remarried. At our last reunion, Joyce's college roommate, "Trish," asked me to talk to her and her husband who happens to be a retired Protestant minister. Turns out, Joyce was in considerable pain because she longed to receive Communion but could not bring herself to approach the altar. Her husband suffered with her, knowing full well the heights and depths of God's love for his wife.

I suggested to Joyce that the intensity of her longing was itself a sign that Christ was inviting her to receive. I also told her about the "internal forum" and suggested she seek the counsel of a pastoral priest. Not long afterwards she sent me a joyful email relating that she would soon return to the sacraments.

I am very grateful to God for my small part in assuaging the pain of these wonderful women.

If our church doesn't help people connect with God's unconditional love, then what's the point?

We have become salt that has lost its savor.

Unfortunately, most divorced and remarried Catholics have never heard of the "internal forum".

But, hopefully, not for long.

In his concluding synod speech, Pope Francis had harsh words for those "letter-of-the-law" types who "frequently hide even behind the Church’s teachings or good intentions, in order to sit in the chair of Moses and judge, sometimes with superiority and superficiality, difficult cases and wounded families."

Rather, said Francis, true defenders of church doctrine, "are not those who uphold its letter, but its spirit; not ideas but people; not formulae but the gratuitousness of God’s love and forgiveness."

Listen up, people. No more straining at gnats and swallowing camels allowed in this church.