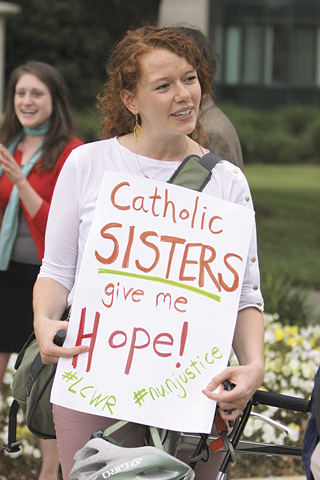 A protester joins others in front of the U.S. Conference of Catholic Bishops building in Washington, D.C., on May 8, 2012, in support of Catholic sisters. (Ted Majdosz)

I'm so thankful for the mid-April resolution of the Congregation for the Doctrine of the Faith's mandate against the Leadership Conference of Women Religious.

Alongside December's positive apostolic visitation report, this is a second win-win for U.S. sisters and for Pope Francis, who successfully de-escalated the troubling (not to say scandalous) situation he inherited.

It is noteworthy, however, that Pope Benedict XVI had already made an important change when he replaced Cardinal Franc Rode -- the former head of the Congregation for Religious who ordered an apostolic visitation of U.S. religious communities -- with the more progressive Brazilian Cardinal João Braz de Aviz. Braz de Aviz criticized the doctrinal congregation's unilateral decision to investigate LCWR without any prior consultation and is on record as saying, "Women's leadership needs to grow a lot in the church."

It looks as if the Vatican (or at least Benedict) realized U.S. prelates had given them gravely misleading reports about U.S. sisters even before Francis became pope.

On the positive side, our work and our way of living contemporary religious life have been affirmed at last, not only by the thousands of ordinary Catholics who came to our defense, but also by the Vatican itself. Consider this excerpt from the apostolic visitation report:

In response to the appeal of Perfectae Caritatis to return to the Gospel, "the ultimate norm of religious life" and to "their founder's spirit and special aim" (PC, 2 a & b) women religious sought to adapt their life style and mission in ways that might enable them to more effectively respond to contemporary needs. In a spirit of creative fidelity to their charisms, they branched out in new ministries to those most on the margins of the Church and society. Women religious in the United States also notably pursued ongoing theological and professional formation seeking to further their ability to serve the Church's evangelizing mission and to prepare others to collaborate in it as well.

As a 27-year veteran of religious life, I can tell you that adapting our life and mission and branching into new ministries to those on the margins was a hard-won development not only in our own communities, but also with episcopal leaders and a minority of laity who preferred we stick to more conventional roles. (And we won't mention that women and women religious could not obtain advanced degrees in Catholic theology and biblical studies until the 1950s.)

It is no small thing to have official approbation after so many years of distrust and criticism for thinking outside the box. And as we quickly discovered, many of God's people don't find religious boxes particularly meaningful. Yet we are called to love, serve and learn from them anyhow. Indeed, the institutional church must do the same if we are to stanch the contemporary exodus from organized religion.

Vatican politics and evangelization issues aside, it is unlikely that the outcomes for U.S. sisters would have been nearly so positive without the unprecedented outpouring of support, love and concern by thousands of grass-roots Catholics.

Today, I want to write about you. Without you, I sincerely doubt that U.S. sisters would have been able to help the Vatican understand what it means to be a Christ-believer in our 21st-century society.

I extend profound gratitude to all those Catholics and other justice-minded people who prayed for us, signed petitions for us, sponsored public vigils and prayer services, and wrote to church leaders for us. Here are some highlights from what is probably the largest grass-roots advocacy effort in the history of the U.S. church:

April 18, 2012: The doctrinal congregation issues a mandate to overhaul LCWR, an umbrella group representing over 80 percent of U.S. sisters. Church-renewal advocates immediately launch a Change.org petition that over the next four months garners 64,364 signatures.

April 20, 2012: Thirteen national and international Catholic reform organizations join in coalition and create the Nun Justice Project to organize ongoing advocacy for U.S. sisters. (Full disclosure: I was a member of the steering committee.)

May 8, 2012: The Nun Justice website launches with prayer, vigil and petition downloads and invites financial redirection for Peter's Pence contributions to communities of local sisters. (At the time, investigative journalist Jason Berry reported that Peter's Pence donations were frequently used to cover Vatican operating costs rather than for the pope's private charities.)

May 29, 2012: On the eve of the spring meeting of LCWR leadership and throughout the summer, hundreds of public prayer vigils are held across the U.S. and internationally. Cleveland's FutureChurch celebration at St. Colman parish attracts 650 people and is covered by The New York Times.

June 13, 2012: Representatives of the Nun Justice Project from the Women's Ordination Conference and Call To Action deliver 57,000 signatures supporting the sisters at the Atlanta meeting of the U.S. bishops' conference.

June 18, 2012: NETWORK, a Catholic social justice lobby singled out in the LCWR sanction, launches a cross-country bus tour -- Nuns on the Bus -- to lift up the justice work of Catholic sisters and protest U.S. Rep. Paul Ryan's budget cuts to programs for the poor.

Aug. 2-18, 2012: Public vigils in over 40 "sister-cities" support LCWR leaders meeting in St. Louis and tape video footage for YouTube. (Only three minutes and well worth the watch!)

April to August 2013: After Pope Francis reaffirms the doctrinal congregation's action against LCWR, over 500 people download resources and send online or paper communications to church officials. Monthly vigils continue in a number of cities.

May 29, 2013, to Nov. 4, 2014: Three separate Nuns on the Bus tours advocate for comprehensive immigration reform, Medicaid expansion and strong voter turnout in the midterm elections to encourage a living wage and a budget that benefits all.

May 15, 2014: Seventeen progressive Catholic organizations issue an open letter asking Pope Francis to personally intervene after doctrinal congregation chief Cardinal Gerhard Mueller publicly criticizes LCWR leadership and St. Joseph Sr. Elizabeth Johnson, one of the most beloved and respected theologians in the world. Nearly 17,500 signatures are delivered to the Vatican, and a number promise to send Spanish-language versions of Johnson's books Consider Jesus and Quest for the Living God to Pope Francis.

Dec. 16, 2014: The Nun Justice Project issues a media statement praising the Vatican's apostolic visitation report as a "first step" in reconciling with U.S. sisters, asking for a removal of sanctions against LCWR.

April 16, 2015: The Congregation for the Doctrine of the Faith and LCWR issue a joint statement, announcing the lifting of sanctions. LCWR leaders meet with Francis for nearly an hour. This is history-making since it is the first time since U.S. sister leaders were ever granted an audience despite a number of requests over the years. The Nun Justice Project issues a media release: Catholic Groups Praise U.S. sister-Leaders in Resolution of Unjust Vatican Mandate.

The early Catholic uprising did not go unnoticed in Rome, judging from Cardinal William Levada's unusual agreement to be interviewed by then-NCR correspondent John L. Allen Jr. just days before Levada's expected retirement. Levada criticized LCWR's decision to give its 2012 annual leadership award to Sr. Sandra Schneiders because of her "view of religious life which has nothing to do with the teachings of the Second Vatican Council or the post-conciliar church." Schneiders is widely regarded as the pre-eminent expert on contemporary religious life, the very life affirmed by the apostolic visitation. (See excerpt above.)

Written three years ago, Levada's complaint testifies to just how much times have changed.

Along the way, an outstanding Solidarity with Sisters website assiduously tracked all media stories and provided resources, programming and commentary about the LCWR debacle.

For me, the past three years have been a roller coaster of highs and lows. Every time I saw a poster or bumper sticker proclaiming "We are all nuns," it made me weep. As I saw it, the outcome of this struggle would be a watershed for the future of our church.

Would we become a place that honored women's voices, due process and dialogue in managing difference? Or would the institution I both love and hate at times continue to devalue women's voices, sticking firmly to a "my way or the highway" mentality?

Thanks to Archbishop J. Peter Sartain, who wins high marks for his ability to listen, and to LCWR sister leaders, whose dogged commitment to contemplation and dialogue ultimately triumphed over Vatican politics, sanity prevailed.

And creative, justice-minded Catholics? Well, they made a way where there was no way.